The most common access control project size is 5 - 16 doors per project. This 2018 result mirrors previous statistics, most recently in 2016 where the category ranked ~50% of responses. This size encompasses most commercial systems.

The chart below displays how the answers were distributed: 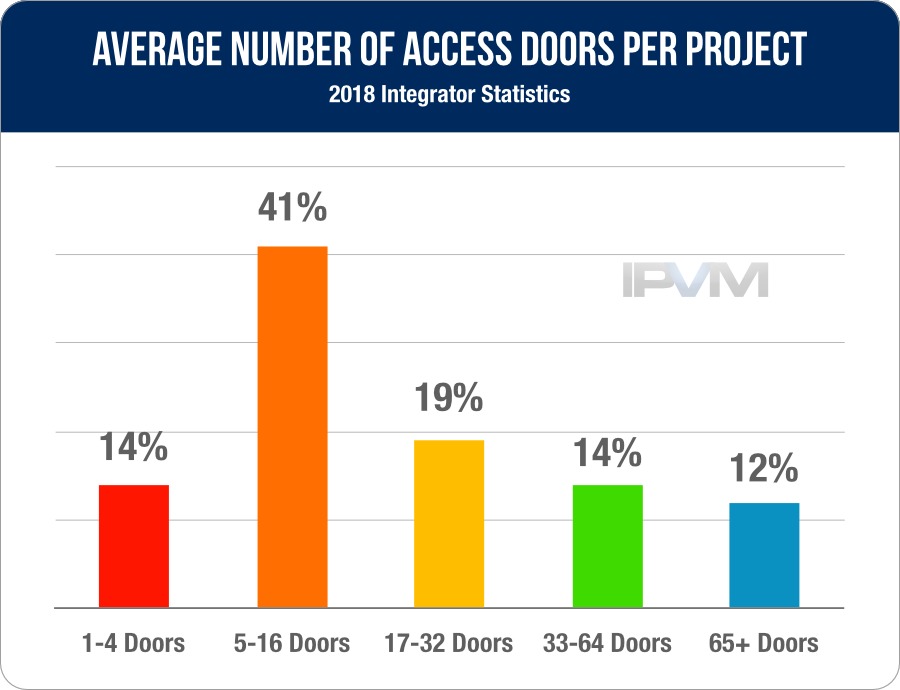 This distribution shows the peak at 5 - 16 doors, typically smaller systems controlling a few security-critical doors in a single commercial property, while one-quarter of projects are in the 'large' project category of 33 doors or more.

From a pragmatic standpoint, why are access projects smaller? In contrast to video surveillance, typically running Average Number of Cameras Per Project where most deploy between 17 - 32 per job, this result shows access control is deployed less frequently.

In the sections that follow, we examine each in depth.

Upgrades Cost Too Much

One of the biggest barriers to more access controlled doors is the cost of upgrading existing systems.  Instead of upgrading select components while reusing many already installed in-situ, access control upgrades often involve replacement of significant portions, meaning changes are viewed as 'grudge purchases' or otherwise spending money to replace what is reliably functioning:

Moreover, many end users have simple expectations for their systems to just unlock doors when needed, and lack the motivation to learn more or the time and money to develop sophisticated system needs. Indeed, while justifying money to update video often has obvious and seen benefit, no such dynamic exists for access:

A full analysis of integrator voted 'Favorites' and 'Worst' systems are coming next week, where we analyze votes and report which market segments platforms are used, which ones are avoided, usage based on project size, performance limitations, and other business factors.

We asked this question in 2014 and 2016 note, and the results were similar, although differences can be seen in the higher end of the market. The number of large 'large' (33 or more doors) is less pronounced, signaling a likely overall increase in smaller project opportunities.