Arecont Vision has long offered many of the highest resolution cameras in the market but they have never been particularly strong in WDR nor low light. Now, Arecont Vision is releasing a new series of cameras that are explicitly marketed for WDR performance and running a broad marketing campaign for this.

We bought the new Arecont AV3116dn WDR camera and put it to the test against leading WDR cameras from Axis, Avigilon, Bosch, Panasonic and Sony. Inside we break down the results in day, night and WDR scenes.

The AV3116DNv1 is a competitively attractive camera for those looking for high resolution, solid WDR and modest low light performance (with binning enabled). Its strongest advantage is delivering these capabilities at a comparatively low cost. However, like all Arecont compact cameras, it lacks 'bells and whistles' that might be critical to your use - such as on board storage, auto back focus, analytics, audio, etc. If you want above average overall video quality and can tolerate the limited overall feature set, this camera can save substantially over many competitors.

For those who currently use Arecont, we believe the advances in WDR and low light performance for this new series makes it an attractive upgrade proposition over existing models (such as the AV3115dn) given its modest ~$50 price increase for this key capabilities.

Using default settings, the AV3116 is one of the worst performers in low-light compared to others in our WDR test. The image is both dim and noisy, producing no usable video in this scene, <1 lx. 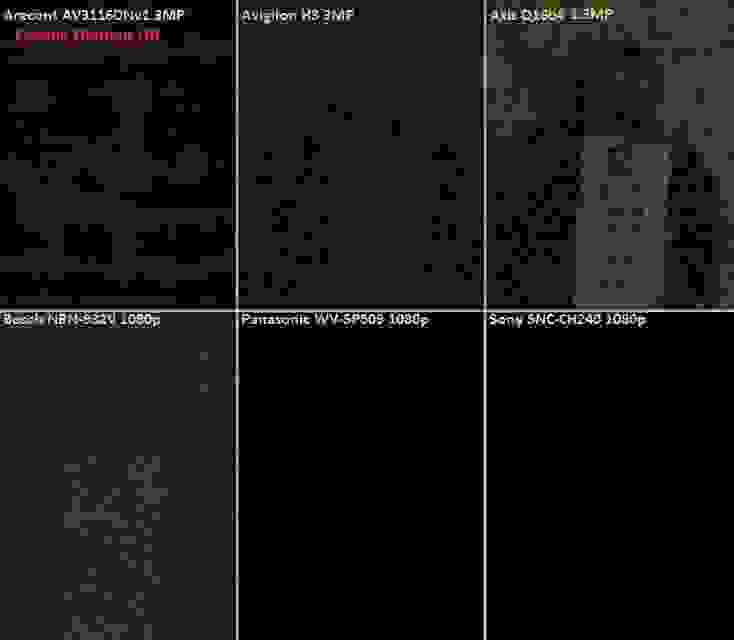 However, in an attempt to improve nighttime imaging, the AV3116DN offers binning when the camera switches to night mode. For those unfamiliar, binning groups adjacent pixels together so that they are able to gather more light. However, this reduces resolution accordingly. In Arecont's case, binning groups four pixels together, reducing resolution from 3MP (2048x1536) to below 1MP (1024x768). With this mode turned on, a brighter image is produced, but our subject is markedly pixelized, with the chart unreadable and facial details obscured. This may be worthwhile to at least provide some detection level video at night, but users should be aware of this drastic resolution reduction. 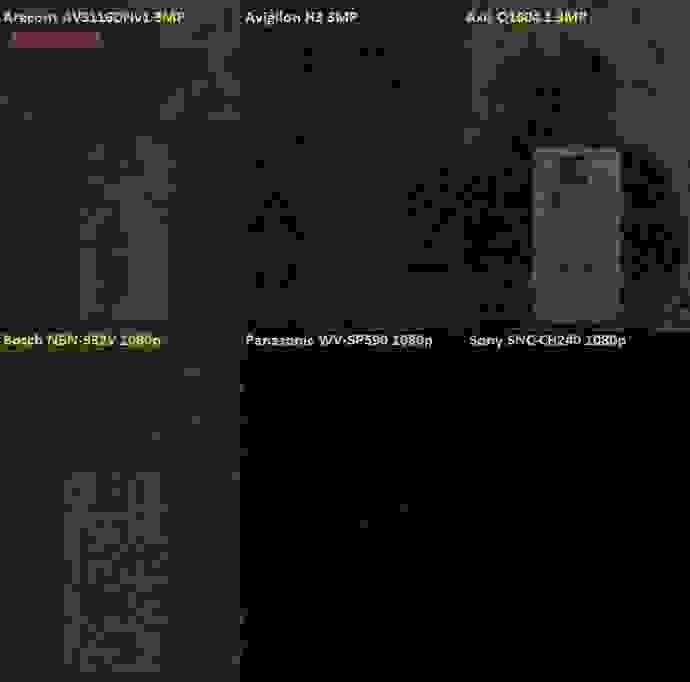 The difference in low light performance is made even clearer in this direct comparison image:

We tested the AV3116's WDR performance against five competitors in our 2013 WDR Shootout. We found that performance was solid in all of our test scenes.

These example images show performance in a garage scene, with an overhead door open with strong sunlight behind the subject (click for larger versions). In this comparison, we can see that the subject's face and the chart are well-lit, and details outside are visible, as well.

With the subject standing in the darker area next to the door, the chart and subject remain quite visible, more so than in the Bosch, Panasonic, and Sony models.

In our indoor, well-lit test scene, the AV3116 performs well, with one minor issue. Compared to others, the 3116 is moderately more noisy, with some artifacting present, which can be seen at the edges of the chart against the subject's dark clothing, as at the edges of his clothing against the lighter wall. However, this did not have a major impact on image quality, nor did it increase when subjects were in motion. Color representation was mostly true, with only slight issue displaying some shades of green on our chart, which looked more grey than other cameras upon review. Again, this is not a major issue. 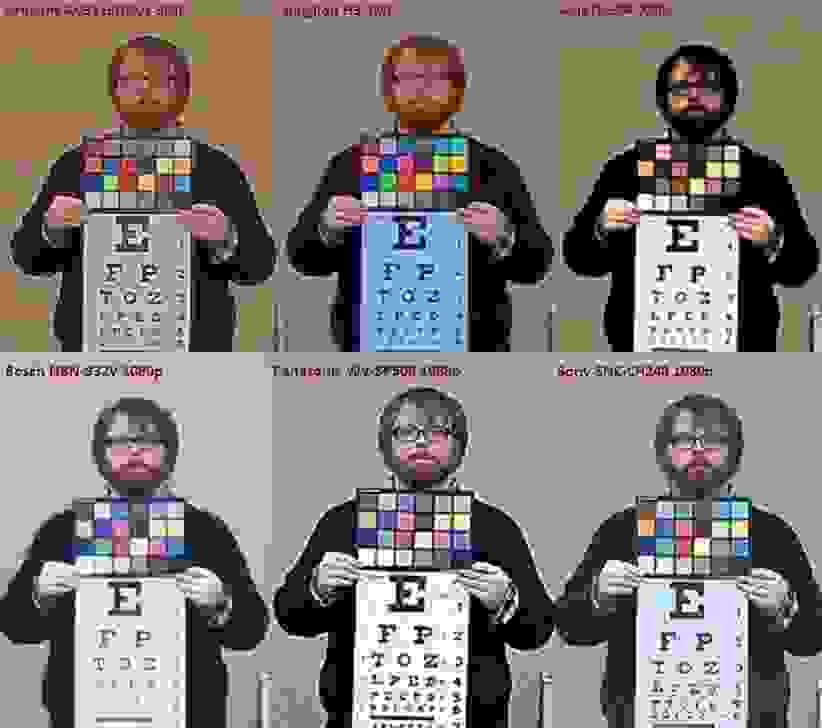 Iin our daytime scene, bandwidth was as follows:

At night, bandwidth increases, but is still low relative to all cameras but Panasonic. Note that the WV-SP509 was producing a very dark image, and thus transmitting less information, which may account for the significant drop in bandwidth from day mode.

With binning on, the reduction in resolution has a drastic effect on bandwidth, decreasing from 9-12 Mb/s at full resolution to only 1.2-2.2 Mb/s, a 75%+ reduction.

A major driver of Arecont's much higher bandwidth is their default quantization level of 16, while other manufacturers generally default to around 27-30. Changing the AV3116DN's quality from 16 to 27 in our test scene resulted in a drop in bandwidth from 10-11 Mb/s to a much more reasonable 4-5 Mb/s, with little impact to image quality. Users should be aware of this default setting, and be careful to change it to a suitable level for their scene.

WDR Camera Shootout 2015 on May 04, 2015
This is the most comprehensive Wide Dynamic Range (WDR) IP camera shootout...
Comments (7) : Subscribers only. Login. or Join.