For the first time, a physical security industry award has been chosen by the people. Rather than constrain voting to a closed group of insiders, ASIS opened up voting for one award publicly, both online and on the show floor. However, the winner was not announced as originally scheduled during the show. Now, IPVM has learned the surprising winner.

Although no official release had been published, in response to an email, ASIS says that Irvine Sensors Corporation is the people's choice for the most innovative new technology this year.

Irvine's 10-by-10 booth was at the back of the exhibit hall, directly across from the People's Choice display and voting kiosk. 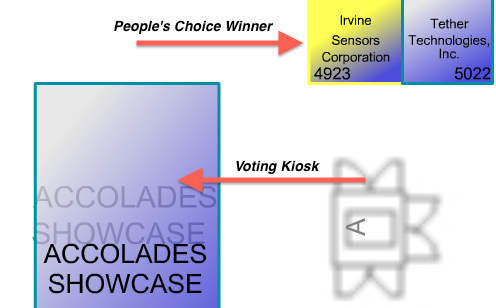 You can find it at the 32:55 minute mark in our video walkthrough of ASIS. Here is a shot of the booth: 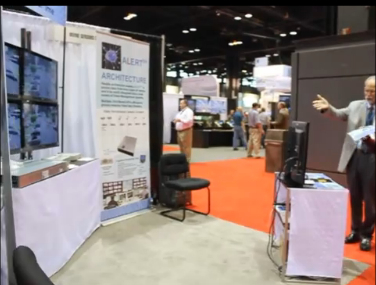 Irvine Sensors Corporation is a defense contractor out of Costa Mesa, California -- not to be confused with Irvine Sensors, also out of Costa Mesa. They have worked in the past on DARPA projects [link no longer available] and more recently on a counter UAV system. It is not clear from sources available online what their primary focus is, but their main effort now seems to be the ALERT product they were showing at ASIS. This technology was also developed under a Department of Defense contract (see its whole Accolades presentation here).

ALERT, is a video analytics system that it claims it can detect threats with almost not latency and can over time learn behaviors. Sound familiar? Irvine says its solution is ideal for larger deployments. At ASIS they were handing out these brochures and showing their demo videos (the one below claims to show their people tracking feature).

However the company says it wants IPVM to sign an NDA in order to talk in depth about how the system works.

Al Rogers, of Irvine Sensor Corporation, said he does not think it has anything to do with being ten feet from a voting kiosk. He says over the course of the show their both had a lot of traffic and attributes part of it to their proximity to the Microsoft booth. "As people were coming and going they were walking past our stuff and we had a lot of interesting stuff to read and the demos were running all day. It was a fantastic show for us."

"I could look at it three ways," Rogers said of the People's Choice win. "First our banner was higher than anybody else's ... And we had a lot of information -- a lot of black and white for people to read and that was a differentiator for this system. Irvine has been around a while and have some previous government projects. We think that is a serious advantage over what is being advertised at the moment. We are a little cocky in that we think we have some trendsetting analytics."

"We're a little bit cautious about how many people are at the show claiming analytics. When we start talking about the hardware and the software and the analytics and the firmware, I think what we have is pretty special."

It is interesting that this company seems to be relatively successful at securing DoD contracts, with no information online about it and little press about their work. However, from what we can see of their analytics, what they say is "pretty special" looks pretty similar to what's already out there.

Did you vote for Irvine? Tell us why in the comments.