Nonprofit ASIS International has richly compensated executives, driven primarily by promotional payments from vendors, and supported by numerous security experts who volunteer at paid ASIS events. In this report, we examine these issues and raise critical questions for further discussion.

This report is based on ASIS's 2010 IRS Financial filing, required by US law for nonprofit organizations. It includes additional details beyond the ASIS 2010 President's Report.

Weeks before publishing this report, we shared our concerns with ASIS. They responded with a thorough response in writing. While we excerpt sections below, we recommend you read the full 2 page ASIS Response to IPVM.

The average total 2010 compensation for ASIS executives was ~$330,000 with the CEO of ASIS making $647,694 USD. The table below is excerpted directly from the IRS filing:

ASIS noted that compensation is "reviewed annually by external independent consultants to ensure parity with similar organizations." Additionally, ASIS said that comparisons can be skewed because "ASIS is self-insured for its employees’ health insurance, and is therefore required to report all of the claims paid annually as compensation" which is atypical.

ASIS rejected those comparisons, offering two other organizations they felt were more appropriate - The Center for Association Leadership where the Executive Director had over $1 Million compensation and the Global Association of Risk Professionals whose top compensated executive made over $800,000.

In the same year, 2010, ASIS laid off a reported 8% [link no longer available] of their workforce, citing 'economic factors'.

ASIS depends heavily on numerous volunteers for ASIS education events and seminars. Typically, not only are the security experts not paid for their time, they need to pay their own way to fly to these events and for hotels while there. Between lost wages and travel expenses, volunteer costs can easily be in the thousands. Despite this, ASIS frequently charges around a thousand dollars per attendee.

However ASIS dismissed concerns, noting that volunteers "do so enthusiastically and with full understanding of the financial arrangements." While volunteers are strictly prohibited from explicitly mentioning their products or services during their presentations, using these events to network for future business is not only common but necessary for many experts to recoup the substantial costs of volunteering.

The majority of ASIS's revenue comes from promotional activities, specifically $10+ million from exhibit fees and sponsorships and ~$5 million from advertising in ASIS's publications and websites. Membership fees only account for a fraction of total ASIS revenue - less than 20%. 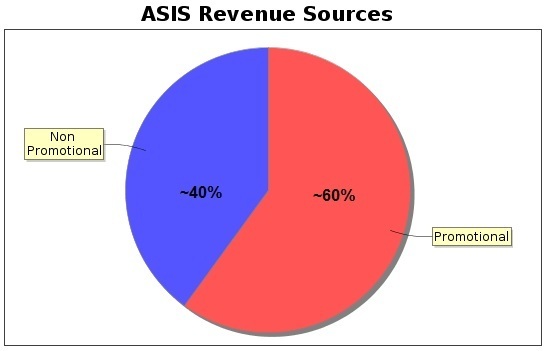 The 3 most important promotional payments are exhibits, advertising in publications and sponsorships.

Equally important, extremely high profits from promotions drives the entire organization. ASIS confirmed that 2010 seminar revenue was ~$14 million, while total costs were just ~$7.6 million, delivering a profit of $6.4 million and an incredible margin of 45%. By contrast, as a whole in 2010, ASIS barely broke even.

ASIS acknowledged this dependence in their response, emphasizing how it helps to do good for the community:

"The Seminar financial margin [editor's note: profits] is used to subsidize other administrative overhead not associated with the Seminar, and many other activities of ASIS worldwide. Seminar revenues also subsidize the development/maintenance of educational programs, standards and guidelines, and certification program evolution and maintenance. Most of these programs do not net positive financial margins, yet they are of critical value to ASIS and the security profession as a whole."

While ASIS clearly does many great things for the security industry, their weakest aspect is security technology, where they make most of their profits for helping vendors market their offerings. Outside of exhibits, ads and awards that promote vendors, ASIS is generally silent and uninformative about security technology.

Their education is frequently deferred to vendors. For instance, in the 2012 seminar program, about half the surveillance presentations had an Axis employee on the panel, including this Axis' ASIS 'edumarketing' presentation which simply removed the Axis logo but kept the spin. Their regular webinar series routinely has vendor's pitching while giving attendees education credits (see this for PSIM). ASIS could really help security manager's improve their technology decisions, an increasingly critical component of security management but they do very little, especially compared to what they could do with such sizeable revenues ($26 Million total in 2010).

For the comments section, here are 3 questions that I think are worth discussing: