New coverage added inside include:

Though EMC threatened / promised to 'redefine video surveillance', it turned out to be a box release and validation that VMS software runs on their machines. Ho hum.

Watch their webinar here for the full pitch.

The new unit was a VNX-VSS-100, a new video surveillance “edge” storage system which starts at 24 TB and nearly $24,000 MSRP. EMC is not targeting this at the “edge” of small camera deployments, but the edge of mega systems, such as citywide surveillance deployments, using the VNX-VSS-100 for recording at each site in the short term, and their Isilon platform for longer term, massive storage (on the multiple petabyte scale).

That said, given with their spectacular failure with the cloud and Axis, this looks to be a step up into more traditional territory for them.

One of Hikvision's main displays was dedicated to iVMS-5200, their new / upcoming open platform VMS. Aesthetically, 5200 is similar to iVMS-4200, their previous management software used with their own DVRs/NVRs and IP cameras. 5200 claims to add several features, including ONVIF and direct driver support of third party cameras, failover, service watchdogs, health status, and more.

Hikvision also had a stand dedicated to Turbo HD [link no longer available], their name for their line of HDTVI cameras and recorders. Turbo HD supports up to 1080p resolution over existing coax and UTP (similar to HDCVI), and automatically detects analog cameras connected to the recorder (similar to Analog HD). 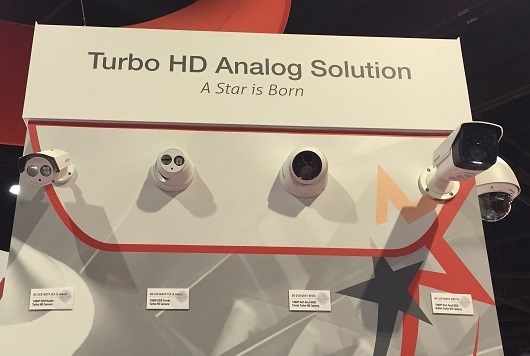 Look for a test of HDTVI/Turbo HD soon vs Dahua HDCVI and Analog HD (AHD).

Hikvision announced a cloud connectivity partnership with Smartvue. In an upcoming firmware update, Hikvision camera users will be able to turn cloud recording on, with live and archived video handled by Cloudvue.com, Smartvue's service. Storage costs $1 per day of storage per month (limited to 1Mb/s streams). So, for example, ten cameras with five days of storage would cost $50/month.

Smartvue also announced a mobile app called "Contribute" which allows users' mobile phones to record video directly to their cloud. Incident video sent from mobile phones is searchable and available alongside typical cameras in the Smartvue cloud. Contribute is planned to be available before the end of the year, for about $15/month.

Avigilon announced a new NVR appliance (8,16 and 24 channel versions) with built in PoE switch, the key differentiator. This NVR may look familiar to some, as it similar to what Razberi and others have released. 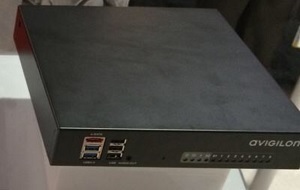 Razberi is partnered with most of the big VMS brands, allowing the same fundamental hardware to run with various VMS software offerings (such as Exacq, Milestone and OnSSI).

However, Avigilon re-branding it allows their sales and marketing team to fully promote and support it, something their rivals (partnering with Razberi) do not.

Avigilon's other notable display was the analytic cameras announced prior to the show (reviewed here), moving VideoIQ analytics into their own cameras.

First shown at ISC West, Schneider Electric has added two retail analytics to their Multisight VSaaS platform: people counting and heatmapping. These features are in closed beta currently for testing, with wider availability next quarter. Also new are "highlight reels", configurable clips which show activity in specific areas during pre-set hours (workers in break rooms during peak hours, for example). Reels are shown in double time for faster review, with a link to the full timeline for investigation. 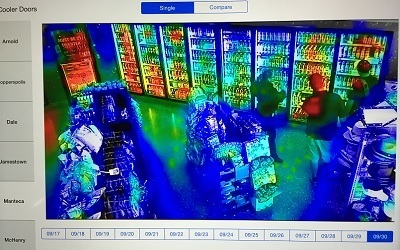 Pelco is also showing the NET5500 series of single and multi-channel encoders and two new PTZ models, the Esprit HD and Spectra Professional for the first time at ASIS, as well as their latest Sarix Enhanced (SureVision 2.0) and Professional models, first shown at ISC West.

After years of Arecont being the only multi-imager game in town, Digital Watchdog displayed four multi-imager cameras here at ASIS (or more specifically, two cameras and two technology demonstrations). First are two 180-degree models which we previously covered under the Secubest name. Both these models are expected to ship in Q4 2014, with pricing "below $2,000." 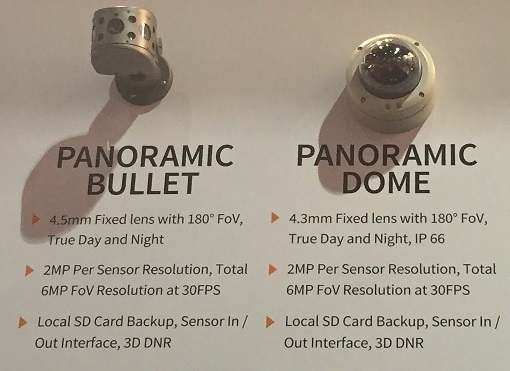 Second, Digital Watchdog showed mockups which they are calling 16K30/8K30, a single camera with four 4K or 1080p imagers. DW plans for these models to include interchangeable, re-positionable camera modules, with 4K and 1080p modules usable as needed. These models are planned to be in production Q2 of 2015. Pricing is not yet available. 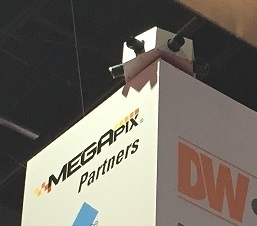 Panasonic's big announcement of the show was their ultra 360 cameras, fisheye panoramic models using 1/2" 4K sensors to deliver a 9 MP panoramic image. These models will include on board dewarping, as their original panoramic models did, as well as heat mapping and 12 configurable people counting zones. These models are expected to ship early next year. Pricing was not available. 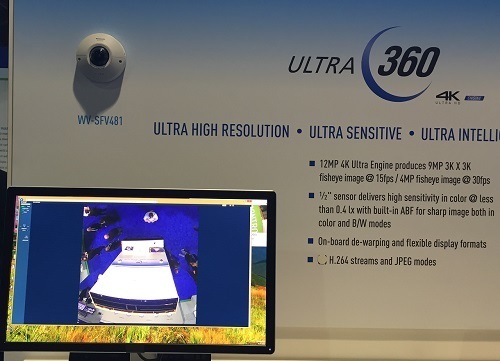 Low light and bandwidth needs to be tested. That said, We are generally sketpical of super bandwidth claims, especially because of the previous DVTel camera having the same claim that we refuted in our testing.

The camera pricing looks to be about average, but certainly not on the low end.

Expanding on the Wisenet series, Samsung is pushing hard on moving software/anaytics/apps to the camera with a program called Open Platform.  Partners at their booth included AgentVI and Platesmart - both demoing their software running on the Wisenet series cameras.  Both claim many more cameras can be run on servers (AgentVI claims 200 cameras per server vs only ~20 per server before Samsungs Open Platform).

Samsung further states that Axis tried and failed to do what they are doing with their Wisenet series - but they did not expand on that statement when questioned.

Mobotix is featuring many 'new' products in their booth, but the only really new item we hadn't seen before is their new I-25 'discreet' hemispheric camera (MSRP ~$600 USD) - designed for indoor use only. Here is the I-25: 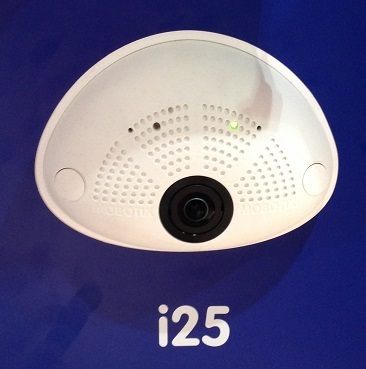 The lower panoramic pricing will help as their Q series one have grown cost uncompetitive with the recent wave of new fisheye entrant.

They also now offer dual thermographic cameras that can use interchangeable sensors. i.e. you can choose to have a 15, 30 or 45 degree field of view with their M-15 thermal sensors (MSRP ~$4100 USD) - just attach which sensors you want/need.

The rest of the 'new' items were things that have already been shown for the last year - but have yet to be released.  These include MX-Multiview (according to the Mobotix rep, "a massive improvement over MX-Control Center'), MX-Display (a touch panel video intercom with RFID and Wifi that can display date, time and temp), and a PTZ mount for their S-15.

The only new product (and it is heavily advertised with full page ads each day in the ASIS Show Daily) is their new 4K Sentinel. The main differentiator (outside the higher resolution) is the change to dual core processors on the 4K Sentinel.  The existing lines use single core processors - which limit their capabilities.  For instance, on the old, single core camera you could do analytics OR edge storage - but not both.  The new 4K dual core camera allows you to accomplish both tasks at the same time. IQInvision also said that the dual core technology will be filtered down into their existing lines as well to increase performance.

Pricing was not disclosed.

The industry has been abuzz about the new Tyco / Dahua OEMed video surveillance line, however, it was not shown at ASIS.

We first went to the Tyco Integrated Services booth - as they were the division that issued the press release announcing Hollis - but nobody knew anything about it. We then went to the Tyco Security Products booth and asked about Hollis - and after some discussion were passed to a manager who had some more information.

According to Tyco, Hollis was rolled out as an 'internal release' - which is why the Tyco IS people did not know about Hollis when asked. Tyco claims that the Hollis line will be a low-end complement to Exacq. The Hollis line is targeted at the very low level, small camera-count customer - those that can not afford the traditional channel. Tyco sees the Hollis line as a feeder system to their higher-end lines - as customers grow, they can be 'moved up' to one of their higher lines when they need more features and functionality.

Seagate has introduced a new series of 4, 5 and 6TB disk drives that come with a data recovery service as an option (Drives can also be purchased without this service). +Rescue, the service, comes at an additional price, though the Seagate product rep was unable to give specific numbers.

How it works: If a drive (or RAID) fails, the end user/integrator sends Seagate the disk (or disk array) and Seagate uses their own internal process (both software and hardware) to recover the data and send it back to the user. Because they have developed this 'mixed' solution (HW & SW) they claim nobody else can do what they do. To further clarify this statement, Seagate says they have a 90-100% data recovery rate using the +Rescue service.

Theia showed a new fisheye 20MP lens called the SY190 that is currently only in development and not yet available for sale.  Partnering with Sentry360 for the show, both Theia and Sentry360 displayed a prototype SY190 mounted on Sentry360's new 10MP 360 degree mini-dome camera.  The current prototype is designed for daytime use, but Theia reports that day/night versions of the SY190 should be available in early 2015.

Also, they are working on motorized versions of their existing line that should be coming out 'very soon' according to Theia.

FLIR announced RapidRecap, an add-on feature to their FLIR Cloud service which performs synopsis of archived video (similar to Briefcam or Axxon's Time Compressor). Users create a recap by selecting one or more cameras and the time period to search, which is then summarized into a thumbnail list of clips showing specific objects and their path through the scene. All processing is done in the cloud, with no additional server load required, making the recaps available on mobile devices in addition to PC. 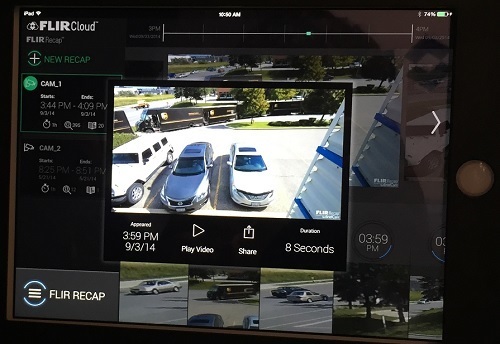 RapidRecap will be available in Q4 2014/Q1 2015. FLIR is currently determining pricing structure but expects it will be a paid feature in their otherwise free cloud service.

In addition to their standard bevy of analog, IP, and HDCVI cameras, Dahua was most notably showing a new wireless intrusion detection panel and associated sensors, including motion detectors, door contacts, and keypads.

On yet another stand, consumer focused devices such as home cameras, door entry systems, Z-Wave wireless lock and light control, and more were shown. 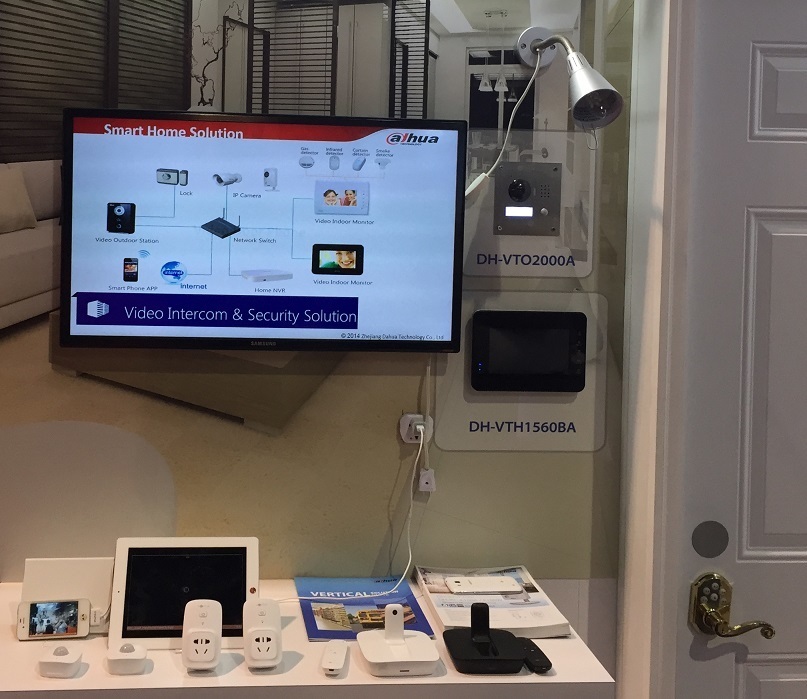 Information in the booth on these systems was light, with no clear plans from Dahua to make them available in North America, whether via OEMs or direct.