In our new round of Arecont tests, we bought 3 Arecont models, starting with the Arecont Stellar AV1215PM-S camera to assess these claims.

We tested against 2 Samsung's Wisenet III low light models, as well as a Hikvision DS-2CD2012, a common low cost integrated IR bullet, to see how it compared in low light, full light, and bandwidth consumption.

On the positive side, during our tests, the AV1215PM-S did not exhibit the same nuisance behaviors seen in other Arecont models in the past, such as changing rotation, stuck cut filters, or strange white balance issues. If these issues should surface, we will update this report.

Note: The MegaVideo G5 still does not have a reset button.

While it is priced on the low side of low light models, 720p/1.3mp integrated IR bullets can be found near $100, with even 4MP models selling for less than the AV1215PM-S (though with with fixed lenses, no remote zoom).

The Stellar camera shares the same form factor as past Arecont MegaVideo cameras, a compact "hockey puck" box camera. The most notable new addition is remote focus and zoom, controlled via an additional connector on the rear of the camera wired to the lens (in addition to the DS auto-iris cable).

We take a look at the physical construction of the camera and zoom lens here:

Most of the Arecont G5 web interface is unchanged compared to previous models. Most notably, controls for remote focus and zoom have been added, seen here:

The bulk of the web interface remains unchanged from past MegaVideo cameras, seen in the screencast below. Note that G5 cameras default to "Balanced" exposure mode, which uses up to 80ms exposure, resulting in blur in low light scenes. Users should use "High Speed" mode to prevent blur, as all other modes use varying levels of long exposure.

At night, the AV1215 produces noticeable motion blur on moving subjects. This is visible as a light moving "trail" behind our subject as he walks through the room in this clip. Additionally, he appears to "ghost" past the test chart in the background. This blur was visible despite us setting the camera to 33ms (1/30s) exposure (from its default blurrier 80ms), and present in both color and monochrome modes.

Starting in a very dark ~0.1 lux scene, the AV1215PM-S is extremely noisy, with poor contrast between foreground and background objects. The test chart is legible (see detail comparison below) though few subject details are available, and it is difficult to discern objects in the room. 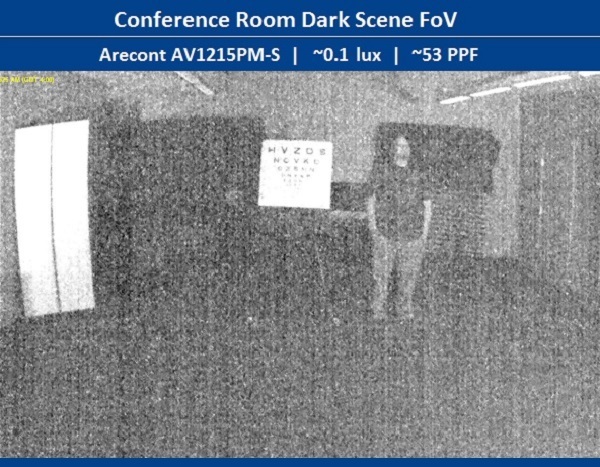 As seen in the comparison below, the Arecont Stellar performed worst of any cameras in this test. While others produced 3-5 lines of the test chart legibly, the AV1215 barely displays line 2. Subject No subject details are available in the AV1215, though in other cameras, his glasses and facial hair are roughly visible.

Note that we have included the 1080p Samsung SNB-6004 as an example of a typical lower cost super low light 1080p model, as 720p/1.3MP models are rapidly becoming less common. 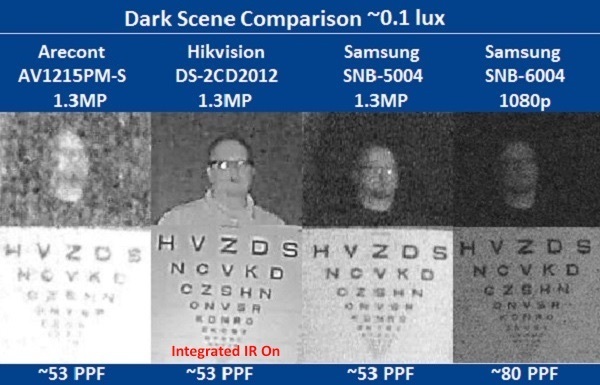 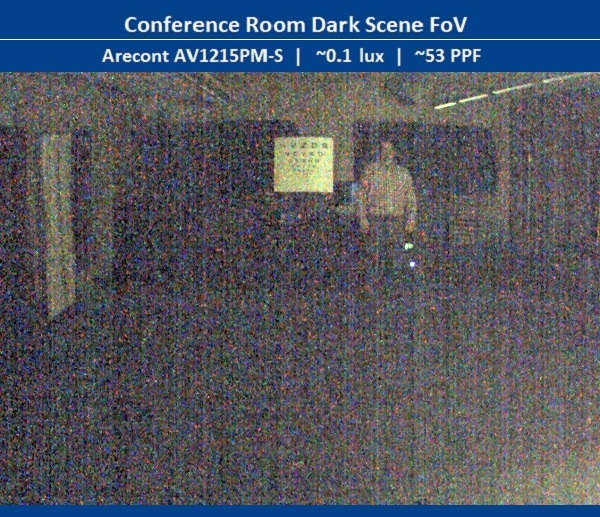 Details are once again poor, obscured by noise, with the test chart even less legible. 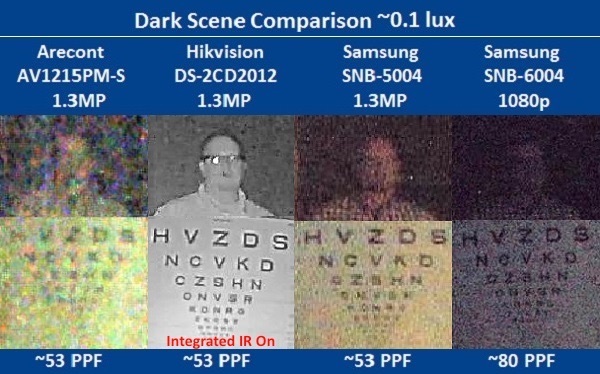 Increasing light to ~1 lux, the AV1215 overexposes the test chart, washing out below the first line, while others are legible to lines 4/5. Subject details are improved, though still less clear than others. 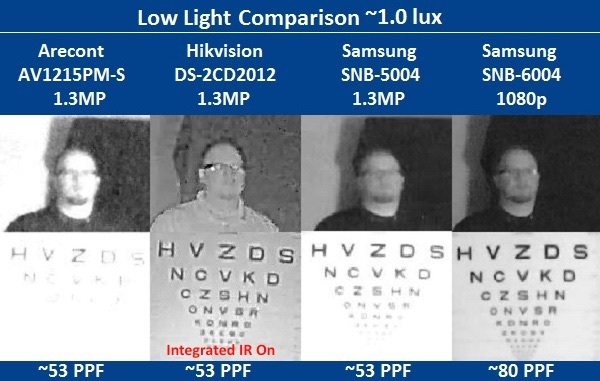 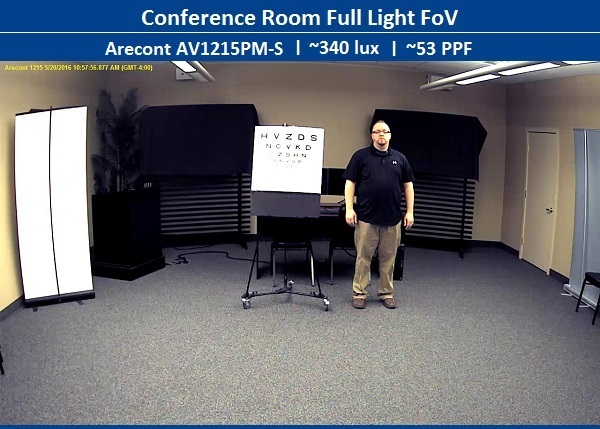 In full light (~340 lux), the Arecont Stellar camera produces similar details to other models, though as in low light scenes, the test chart is washed out starting at line 3/4, not an issue in other cameras. 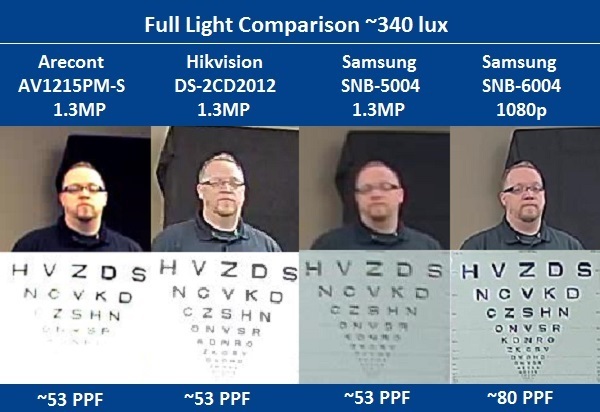 The Arecont Stellar camera's bitrates were higher than competitors in both low light scenes (~1 lux and ~0.1 lux), more than double the next highest competitor. In full light, Arecont was moderately lower than the Hikvision 2012, though both were significantly higher than the Samsung SNB-5004. 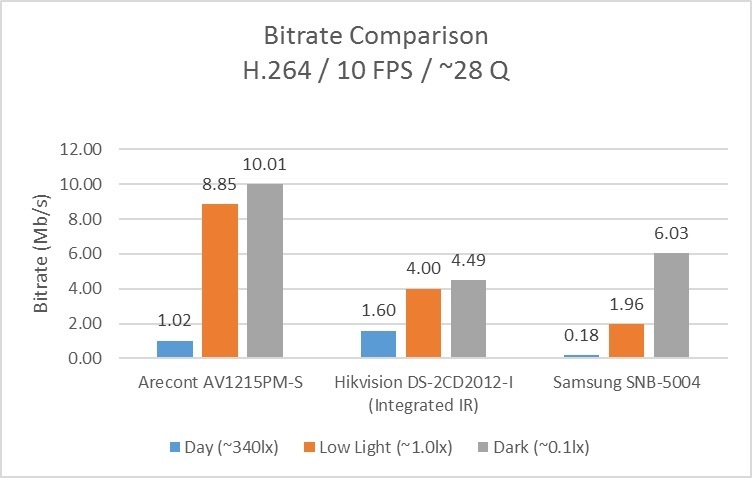