Well, Arecont has done the calculations and their 10MP camera provides exactly 3270% more benefits than SD cameras. Amazing! They even graphed it out: 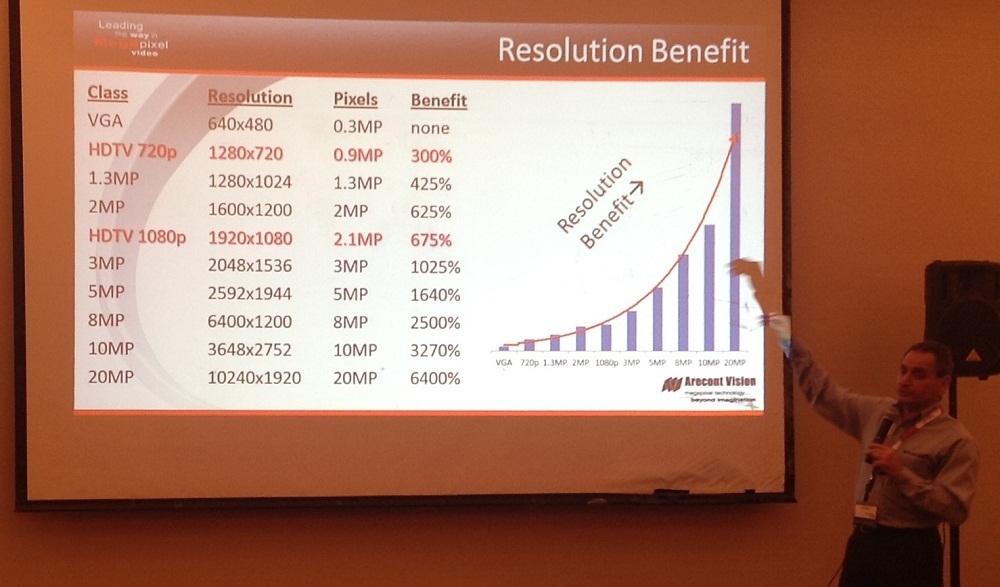 That answer is in another Arecont slide demonstrating how a 10MP camera can cover the area of 32.7 VGA / SD cameras: 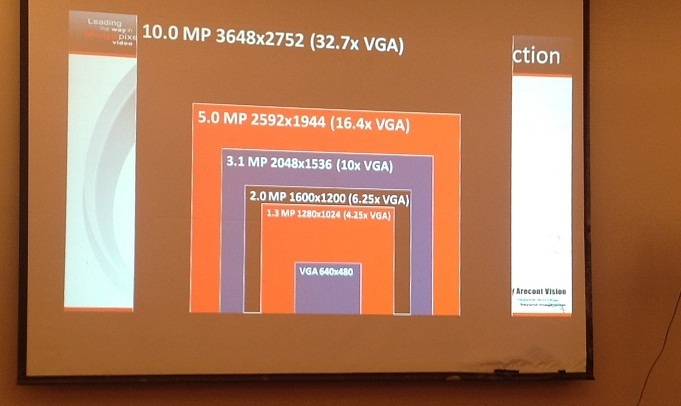 At this point, an experienced observer may say "Surely they only mean pixels and not that 1 Arecont camera does the work of 15 cameras" but then you watch this clip:

Arecont literally is claiming that a single 5MP camera equals 15 SD cameras. And that is not the first time we have seen or heard Arecont do this as those slides are from Arecont's standard marketing deck.

Prior to publication, we shared our concerns with Arecont along with the images and clips. They responded:

"We are not saying that because a camera provides 6x the resolution that it takes the place of 6 cameras necessarily. That would depend on the scene that needs to be captured."

I am glad to hear they do not believe this but their stock marketing material and pitch regularly and repeatedly makes such claims.

This is the biggest myth we see in all of surveillance.

Industry experts might dismiss these marketing claims as being so obviously false that no one could fall for it. But the reality is many people are new to megapixel technology, including most security managers, who have little idea or practical experience to evaluate these claims. It sounds good on paper and plays into CSI expectations.

Indeed Arecont is not the only one. Avigilon has its owns laughable 'replaces up to 95 conventional cameras' claim. But Arecont is by far the worst and most aggressive at this.

What Should Arecont Do?

Here's my advice to Arecont on how they can aggressively yet responsibly market their megapixel cameras. Drop the crazy pseudo math and focus on the practical benefits of their SurroundVideo series - their best and most highly differentiated line.

Since it integrates 4 cameras in a single housing, that line literally replaces 4 MP cameras at a lower product cost, with less installation hassle and often less VMS licensing fees. No camera with third-party support comes close to it for such a combination of valuable features, especially when you consider the 180 degree models providing fairly high details over a broad range.

While our test results of the 20MP version shows a number of important issues and limitations, overall the series is quite powerful and largely unmatched by competitors. Plus they have a promising smaller form factor, improved WDR version planned for 2013 release.