How would like to reduce your storage costs by up to 50% with just a click of a button? That's the promise of Arecont's 'Bandwidth Savings Mode', a new option that slashes bit rate up to half 'with least impact on image quality.'

On the other hand, we are skeptical of such claims as often they are nonsense (e.g., DVTel's super low bandwidth cameras) and now that bandwidth consumption can vary dramatically (see our Advanced Camera Bandwidth Test Results).

However, such savings, if real, can be enormous so we put them to the test with Arecont's 3MP, 5MP and 10MP.

We used an indoor test scene: 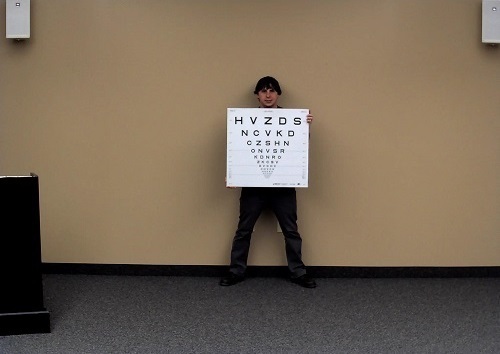 And a low light scene: 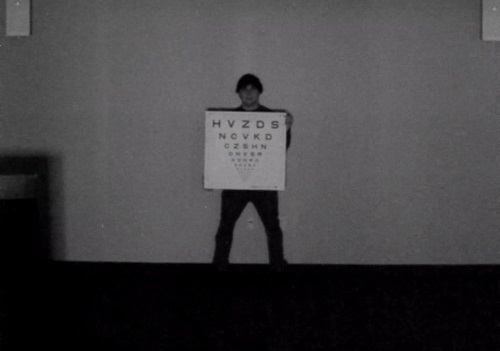 Finally, we tested the cameras outside against moving vehicles:

Here are our the key findings from our test of Arecont's Bandwidth Savings Mode (BSM):

Bandwidth savings mode has little value since (1) even with it on, competitor cameras are still frequently lower and (2) it comes with clear desaturation (black and white effect). On the other hand, binning clearly is useful and competitively very rare.

In our indoor full light scene, bandwidth savings mode reduced bandwidth by about 30% on both the AV3116 and AV10115, while providing a reduction of over 70% in the AV5115. 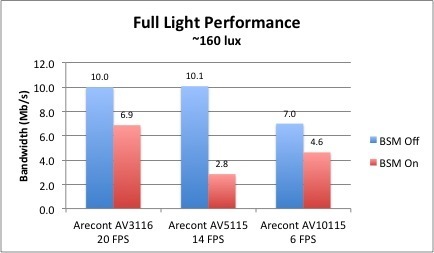 Below is a FOV image of our test scene in full light: 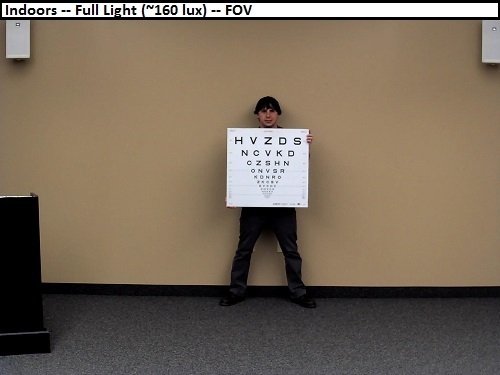 To see the impact of bandwidth savings mode on image quality, we began in our typical indoor test scene with a human subject and test chart. In this scene, desaturation is obvious, but there are no ill effects on actual details delivered in either our subject or test chart. 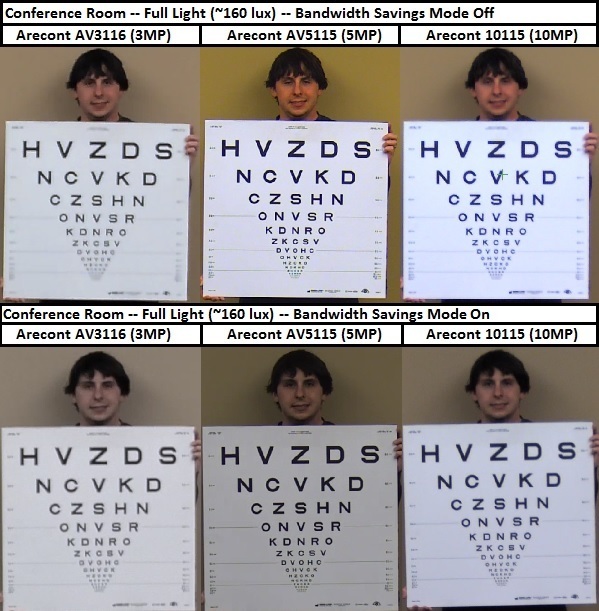 Testing color fidelity with a Macbeth test chart, we can see the full effects of desaturation. While all cameras experienced this, only the AV3116 had severe issues, with bright yellow appearing as white. 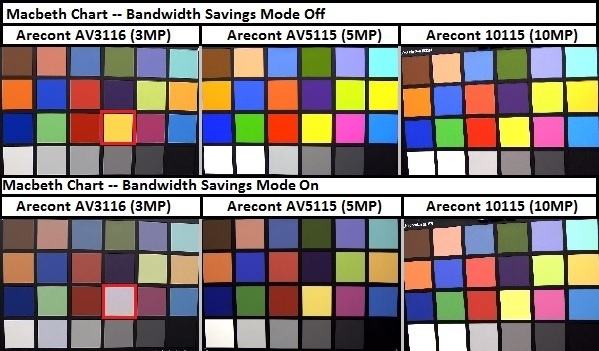 Aside from Bandwidth Savings Mode, users may further lower bitrate of Arecont cameras by turning binning mode on at night. This cuts resolution by 75% (1024x768 binned vs. 2048x1536 full resolution in the AV3116), improves bandwidth consumption, as well as low light performance. This image comparison from our previous test of the AV3116 shows this improvement in low light performance and bitrate:

In low light, we allowed our two day/night cameras to switch to monochrome, while the AV10115 stayed in color mode. Bandwidth reductions here varied from 35-66% with the AV5115 again seeing the most savings.

Note: bandwidth measurements of the AV3116 and 5115 were with binning on: 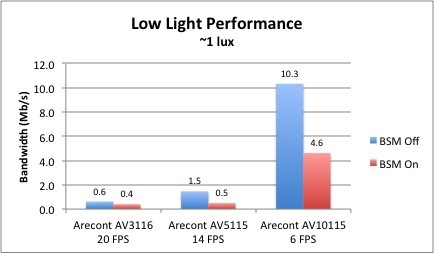 Below is a FOV image of our test scene in dark: 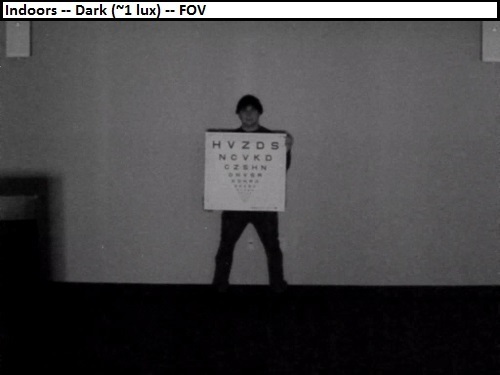 At ~1 lux, turning BSM dims images slightly but noise is reduced, presumably due to a decrease in gain. This reduces facial detail in the AV5115 and AV10115, where our subject's face is completely black. However, in the AV3116, the reduction in noise improves details of both subject and chart. 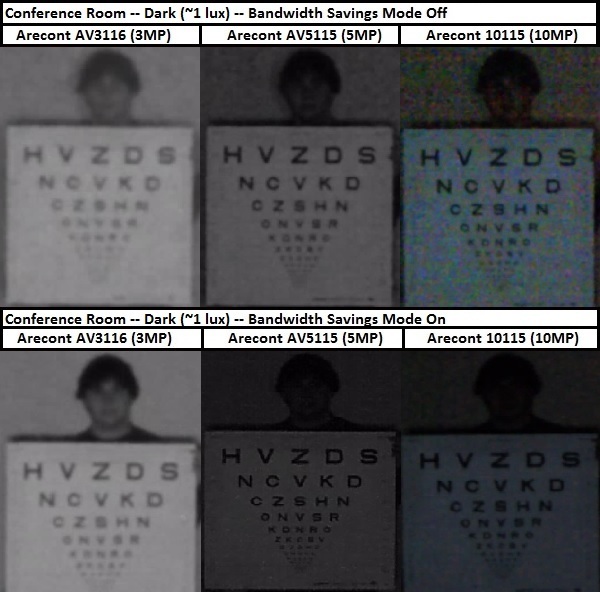 We found that some blurring was introduced on our moving subject when BSM was turned on. This comparison shows these effects in full light, especially notable in the AV3116. 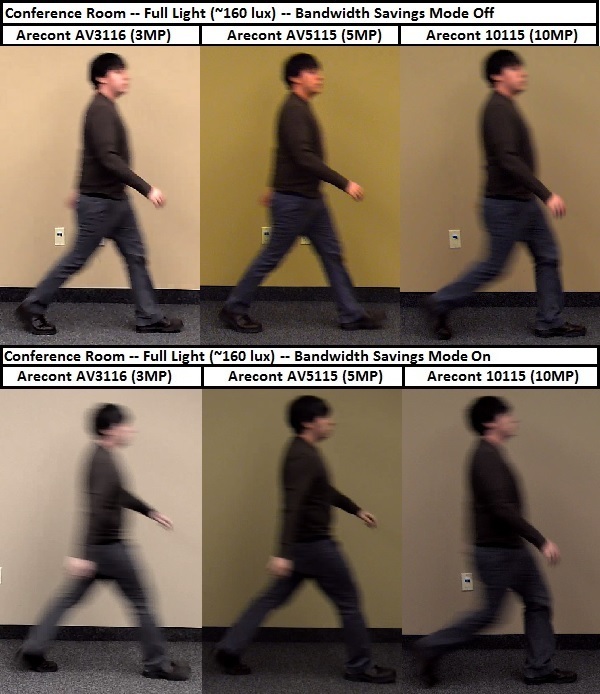 In low light this was also true. Note that all cameras were standardized to 33ms (1/30s) exposure in this scene. 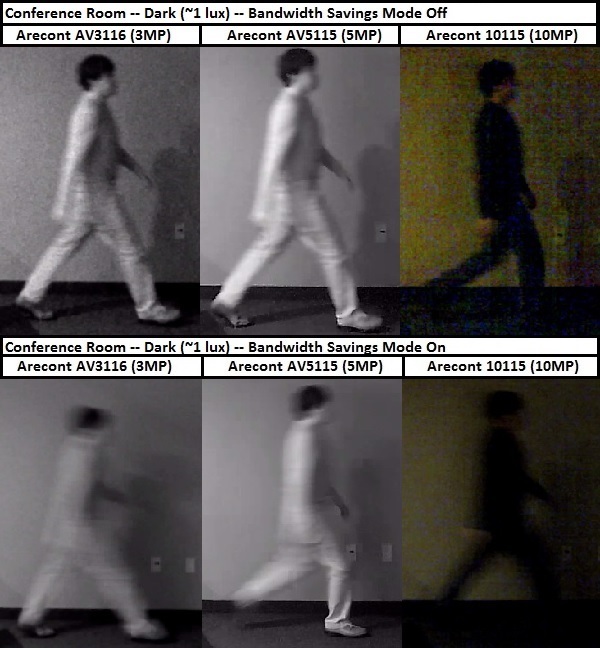 Due to the blurring present indoors, we expected to see the same issues with faster moving objects, so tested the cameras on a nearby road. However, vehicles moving 30-40mph on a nearby road did not display any motion blur.

Here is the FOV of our outdoor scene:

Notice how with bandwidth savings mode turned "on", the browns and greys have been subdued, turned black, and darkened, and while not completely desaturated, image quality is noticeably worse. As an example, look at the highway sign in both images, and notice how much greener the BSM Off image is compared to the almost black highway sign in the BSM On image.

Bandwidth of the AV3116 is high relative to the average of other 3MP and 1080p WDR cameras. Turning BSM helps, reducing bandwidth to below that of the Sony SNC-VB630 and nearing that of the Avigilon H3 3MP, but it still remains higher than both Bosch and Samsung in this scene (even after factoring in modest differences between a 3MP and 1080p pixel count). 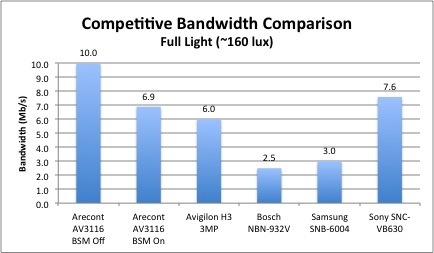 Video Surveillance Bandwidth Guide on Dec 16, 2016
Bandwidth is one of the most fundamental, complex and overlooked aspects of...
Testing Axis Zipstream on Apr 13, 2015
Has Axis found its breakthrough differentiator? Can they demand a premium for...
Axis Zipstream Claims Average 50% Savings on Mar 25, 2015
Axis claims that its new Zipstream compression technology can "lower...
Comments (8) : Subscribers only. Login. or Join.