Are ObjectVideo's Patents Going to Be Invalidated?

Publicly, the last few months have been outstanding for ObjectVideo - with Sony capitulating and the world-wide leader in analytic patent litigation celebrating their 60 day ultimatum in a tiny booth at the edge of ISC West. However, behind the scenes, a major counter-offensive has been launched by Bosch that is well under way to invalidate Object Video's core patents. In this note, we examine the moves and their potential impact.

While Object Video seeks to force manufacturer to pay patent licensing, rivals have been working to get OV's patents invalidated around the world.

Since the legal battle is centered in the US currently, Bosch's requests for USPTO re-examination are likely the most important. On April 10th, a 'non final action mailed', the Patent Office has evaluated that "four of the proposed issues have established a reasonable likelihood that the requester [Bosch] will prevail." If Bosch succeeds in invalidating core elements of OV's patent portfolio, it could be mean an end to OV's legal campaign.

These behind the scenes battles are all the more interesting contrasted to OV's highly public campaign to intimidate manufacturers to settle in the next few weeks.

Since Bosch settled with Object Video, the invalidation request was terminated. See screenshot of termination decision: 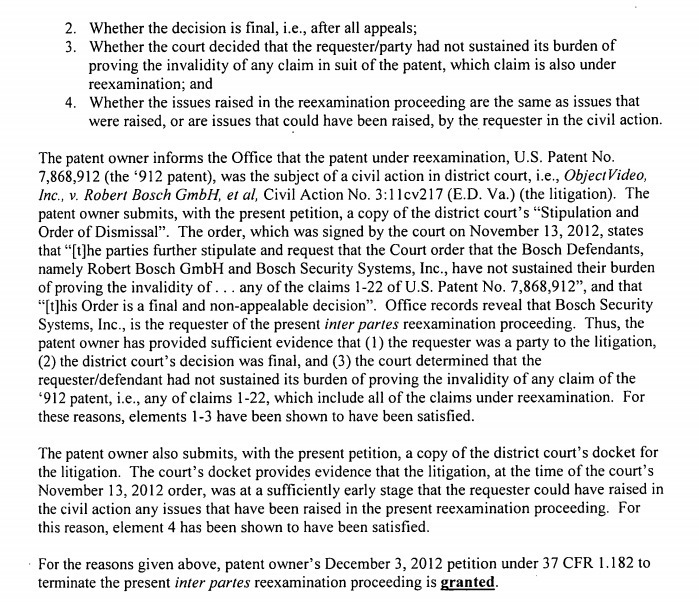