Security sales people often find it hard to resist seizing on headlines to spur equipment sales. Nothing motivates budget conscious end users to increase their spending like combining scare tactics and magical solutions. To that end, a US integrator has an amazing video showing how a Genetec system can avert school shooters. It needs to be seen to be believed:

The video was posted on YouTube in November (before the Newtown shooting) and then endorsed by Genetec nearly two weeks after it: 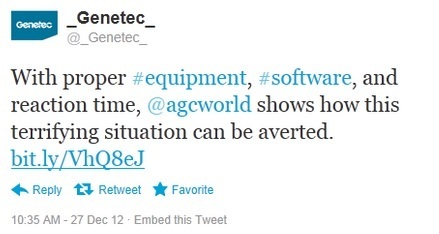 So in fairness the integrator was not trying to profit on the deaths of six-year olds in Connecticut, just all the other children and teens shot in the past decade. As for Genetec, what excuse do they have?

[UPDATE: A Genetec executive has replied in the comments below.]

It would be more understandable if the solution was viable to avert school shootings but it is not:

While a few nice system features are demonstrated - automatic lockdown of doors, mobile monitoring and integration with the police - these are highly unlike to 'avert' a school shooting. Even from the perspective of the integrator and Genetec, prudence would dictate not setting such unrealistic expectations especially given the potential liability and blame they would shoulder in an actual incident.