If Amazon selling cameras for cheap does not get your attention, maybe the fact they have added installation services will.

Not only can end-users buy hardware themselves, but now they are able to get quotes from multiple installers at the same time who are all competing to be the lowest priced provider.

In this note, we examine Amazon's Home Services for surveillance installation.

Amazon Home Services is essentially a jobber service, where customers can buy installation labor for surveillance systems among other service like clothes dryer installation, plumbing, and even housekeeping.

Availability of particular services are listed according to the buyer's area code. Considering the service launched in Q2 2015, not all areas offer every service, with big metros typically being the first to offer coverage.

This is true of the 'Surveillance Camera Installation' service [link no longer available], that has spotty coverage in North America, but already has vendors established in major markets.

Shoppers can look only for service, but the relevant 'Home Services' link is featured on several product pages. For example, this Zmodo Kit and this Q-See system both prominently list offers to link buyers up with install labor directly from the product page.

The most compelling aspect of Amazon's installation offering is up-front estimates to perform installation jobs site unseen.  For example, pricing is based on a range of cameras installed and date the install is requested, but nothing more, and with the lowest price generally displayed as the first result.  As this example shows, the estimated pricing for an install of 5 - 8 cameras is ~$500 from the top 4 vendors, and under the terms of the program, the final price must be agreed on by all parties before work begins.

Amazon calls this 'Upfront Prices', and claims even further that the initial price advertised is the 'final price agreed upon 9 out of 10 times'. 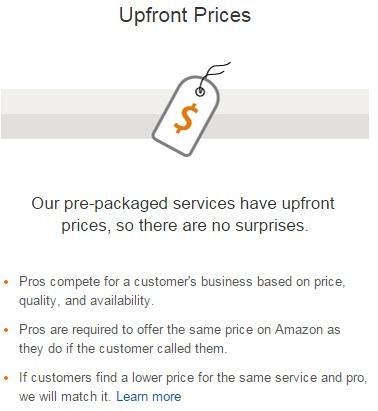 Amazon also claims they will match a lower price within 30 days of the work being performed by making the difference up in an Amazon giftcard, and will stand by a 90-day 'Happiness Guarantee' where they will refund up to $2500 in potential costs if the hired 'Amazon Pro' does not fix the problem.

In contrast to the independent pricing and guarantees of many small installers, these are very favorable for the customer and are not typical to the terms generally offered for small-system surveillance installs.

Another key aspect of the offering are that all the prospective contractors have been 'Invited, Vetted, and are Licensed' according to the terms of membership in the affiliate program. Amazon only allows bidders that have demonstrative histories in doing a particular type of work, carry the minimum licenses and insurance, and have passed both criminal and business background checks to be listed in the program.

Nationwide coverage for installation is spotty at best, but a check of a lower Manhattan, NYC Zipcode (10007) returns at least 10 potential candidates bidding for work: 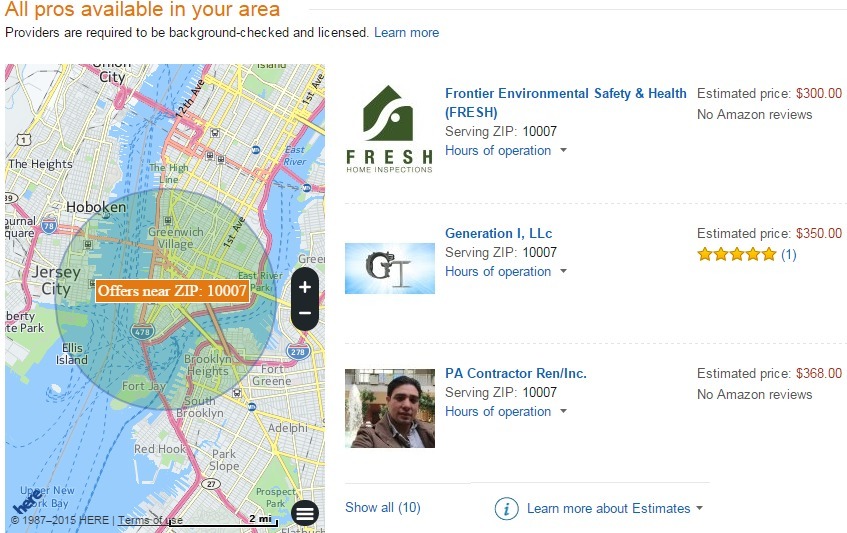 In general, the types of installers bidding surveillance jobs are not specialty surveillance integrators, but rather are a general mix of property management/maintenance companies, Home Theater installers, general repairmen, and small commercial construction contractors.

In a review of Zipcodes in NYC, LA, Chicago, and Boston, only three specialized security-centric integrators and alarm companies showed up out 25+ potential contractors. The other vendors simply have a more general focus.

To become one of Amazon's service vendor, the cost is negligible, but profits are not likely going to be great. Provided an applicant satisfies the initial criteria, Amazon takes between 10% - 20% percentage of the total invoiced amount for every subsequent referral job landed through the marketplace: 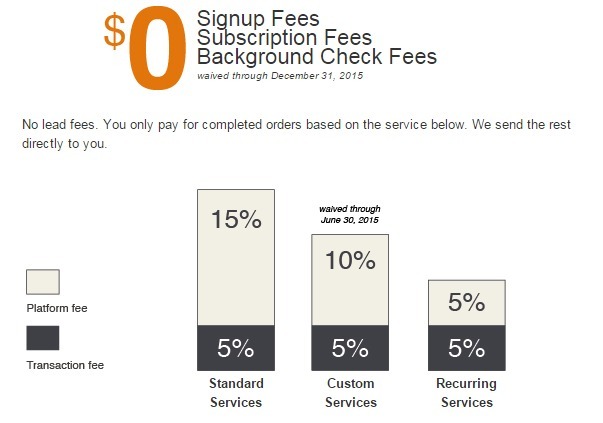 For an installation of 2 - 4 cameras, which the initial estimates suggest is a $300 job, Amazon's cut is $60. Having 20% taken off the top of the job is significant and may indicate that profits down in single-digit percentiles should be expected.

On the flip side however, traditional sales and marketing costs are essentially zero through Amazon. Instead, low pricing and a favorable 'star rating' (like those used to grade product offerings) are used to rate service providers as well. The exposure and success of your company inside Amazon's Install network is not directly a product of internal promotion efforts at all.

The biggest question then is "How much money should installers expect to make?" using HomeServices.  The answer is likely $50 - $90 per hour, but is subject to where specific cameras are expected to be installed.

If the typical residential camera and cable installs in 90 minutes, the rate is essentially $80 per hour for a 5 camera job earning $600.

According to our collected survey stats, an integrator would estimate between 0.95 - 2.75 manhours hours per camera, just to hang to camera - cabling labor is extra. The ability to break even seems very difficult for commercial integrators who traditionally bill $85 - $125 per hour for similar work, but could be adequate for smaller residential-focused installers.

The installation scope of work that Amazon defines is limited to:

In general, the overall length of the cable run, the mounting surface of the cameras, the expectation of hiding cables, cable terminations, cable grade, cabling support, or DVR/head-end recorder installation is not included. These factors are routine elements of a professional installation scope of work, but are left as 'gray areas' not explicitly addressed by Amazon's estimates.

In contrast, a commercial integrator would not offer a flat-rate install price but instead offer bids based on a survey of the site. Due to the risks of losing money on Amazon's platform, an installer would need to significantly emphasize volume and speed and encourage any 'additional constraints' like hiding cables and head-end installation to be extra charges.

It also bears mentioning that the pricing above generally centers around apartments in highly populated, urban environments. Typical living spaces are generally more compact in these areas (often less than 700 square feet) than larger suburban or rural homes that might have a footprint of 1500 square feet or more.  In general, the smaller footprint a 'HomeServices' install addresses, the more profitable it stands to be based on less cable to install.

Becoming an Amazon HomeServices installer could be a boon for a small 'man with a van' installer operation. Any company without a large overhead operating expense and that can benefit from Amazon's massive indirect marketing and merchandising influence stands to gain new work they would have missed out on otherwise.

In general, time will tell, but Amazon HomeServices could grow to become a significant competitor in the small-scale commercial and residential surveillance market.

The mix of Amazon's marketplace convenience, favorable end user guarantees, and diverse labor offerings could entice many consumers to consider begin using HomeServices instead of the chore of manually contacting service companies and gathering/evaluating quotes on their own.

Alexa Guard Expands Amazon's Security Offerings, Boosts ADT's Stock on Sep 21, 2018
Amazon is expanding their security offerings yet again, this time with...
Amazon Techs Installing IP Cameras Tested on May 18, 2017
In 2015, Amazon started offering video surveillance installation. Now,...
Amazon Distributor Favorability Results on Mar 03, 2017
Amazon is not a security distributor, but they often have more stock,...
"The Company The Industry Always Feared Would Arrive" Is Here on Apr 25, 2016
Not only will entry level product profits be wiped out, but so will...
Smart Integrators Should Lead With Access Control on Nov 10, 2015
3 years ago, we asked "Should Smart Integrators Lead with Access Control?"...
This Unicorn Aims to Get Integrators Sales on Sep 29, 2015
Getting new customers is one of the hardest challenges for integrators as our...
Amazon Aims To Compete With ADI and Anixter on Jun 01, 2015
The ambition of Amazon has no end. Recently, we explained how Amazon has...
Comments (28) : Subscribers only. Login. or Join.