Now Altronix has released the second generation of the eBridge line, simply named eBridge Plus.

In this note we take a look at this new line, comparing its features and prices to their previous and competitive EoC models to see how it stacks up.

The eBridge100TM is the first offering of Altronix's second generation eBridge Plus line. This transceiver supports Ethernet and PoE via coax and Cat5e cables up to 300m/500m respectively (3-5x the 100m limit of standard Ethernet). No local power is required, with the camera end unit powered via PoE. The previous generation did not support PoE up the cable. 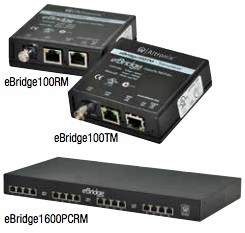 At the other end, Altronix has released four, eight, and 16 port receivers which convert coax (no support for UTP in multichannel units) to standard Ethernet. These receivers, like the eBridge100TM, do not supply or require power on their own. Instead, they are powered by a PoE switch or midspan, 802.3af (up to 15W) or 802.3at (30W) compliant. Altronix markets their line of PoE midspans (NetWay) for this as they have some features, such as full web interface management and 48V/56V battery backup, which are not common on all midspans, but any compliant device may be used.

Gone from these updated eBridge models support for analog video transmission over the same cable (aka SLOC).

This diagram, taken from Altronix's documentation, shows the layout and components of a typical eBridge Plus network layout: 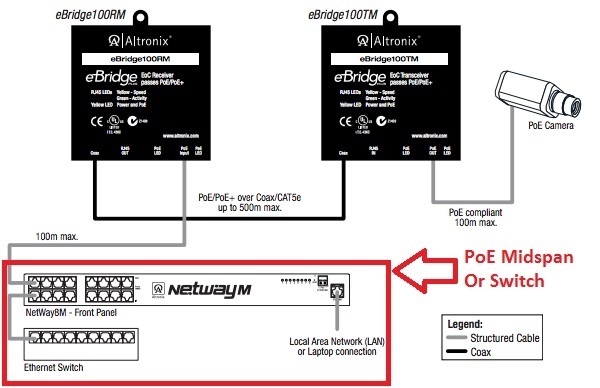 A single channel eBridge kit including receiver and transceiver, the eBridge100RMT, sells for about ~$240 online. This is more expensive than the original eBridge, which sell for under $200 online. However, this is inexpensive compared to many competitors, such as Veracity and Comnet, which sell for nearly double this price per pair ($180-200 per side). Pricing is not yet available for the Altronix multi-channel receivers.

Further, many competitors (notably Veracity) do not produce multi-channel receivers, requiring multiple single channel units to be racked together at the head end in order to handle more than one camera. Multi-channel receivers such as those in the eBridge Plus line reduce cabling complexity and points of failure.