Delivering access control to parking lot gates or elevators usually means spending tens of thousands on special cables or trenching. However, Allegion is claiming it's new kit can do everything for a fraction of the historical price.

In this note, we examine how it works, which access platforms it works with, and see if it is really less expensive than other methods.

Allegion's Wireless Gate/Elevator Control Kits are not standalone access systems, but a bundle of devices designed to connect remote access equipment by wireless link. The kit varies by application, but all are constructed around three main parts:

Shown in an example gate system, component installation is shown in the image below: 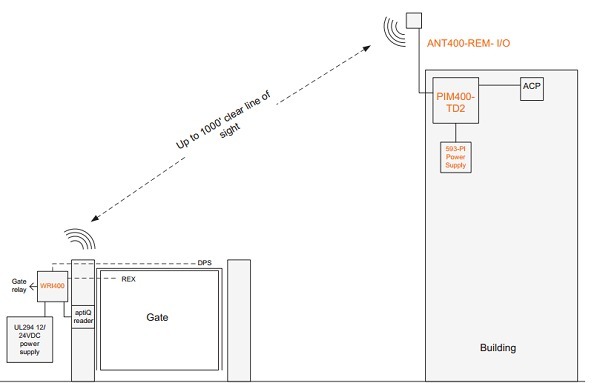 The WRI-400 reader interface connects the reader, position switches, gate operators, and other serial I/O to a building mounted PIM400-TD2 that is connected to an access control panel.

Wireless: Rather than running hard cables to distant locations like vehicle gates, or with mobile locations like elevator cars, Allegion's kit uses 900 mHz wireless for a claimed range of up to 1000 feet with a clear line of sight. This claimed range is sufficient for covering most commercial parkinglot gates or elevator shafts.

Open Compatiblity: The key to the kit's appeal is that it is nonproprietary to one particular system.  The 'secure side' PIM400-TD2 panel passes Wiegand or Clock & Data to other access platforms and controllers such as HID, Axis, Lenel, Honeywell, RS2, Genetec, Avigilon, and others.

Street price for the kit is ~$1,500 from internet retailers and national distributors. Allegion dealers will likely get the best pricing, although buying minimums likely will apply.

Compared to traditional methods of trenching and burying communication cable, this is a small percentage of the typical cost. Even a trenching run that does not distrurb parking spaces or concrete overlay can cost more than $20 per foot. For a 500' run, trenching labor alone could cost $10,000 or about 5X the cost of Allegion's wireless kit.

Line of Sight: Any maximum wireless range is heavily dependent on clear line-of-sight, or with no obstructions between link points. Even incidental obstructions like foliage growth or more permanent barriers like structures or RF interference can weaken signal strength and reduce range.

Two Readers Only: The kit supports a maximum of two readers. Some applications like ganged turnstiles or multiple lanes of gate operators will likely require multiple kits, where a single buried cable or fiber could support many more discrete access points.

Using wireless to transport access data is not unique, and other options in the market include:

However, other options are typically proprietary, unable to deliver to range of Allegion's offering, or limit the possible compatible readers. Allegion's long range wireless offering essentially replaces the direct cable connection between the reader and controller with a set of wiegand compatible wireless radios.