All In One, No False Alarm, Intrusion System Startup

It detects intruders through closed doors.

It is both an intrusion and video system, for just $299 that sits on your bookshelf:

Is this startup crazy or does it have the next big thing? In this note, we dig into their product specifics, examining its potential and problems.

Cocoon claims it 'is all the security a home needs in a single device' by layering multiple sensors into a single device about the size of a baseball. Like other recent home security products, the core device is an HD security camera but also includes a PIR motion detector, a microphone, siren, and a mix of audio sensors tuned to pick up ultra-low frequency noise: 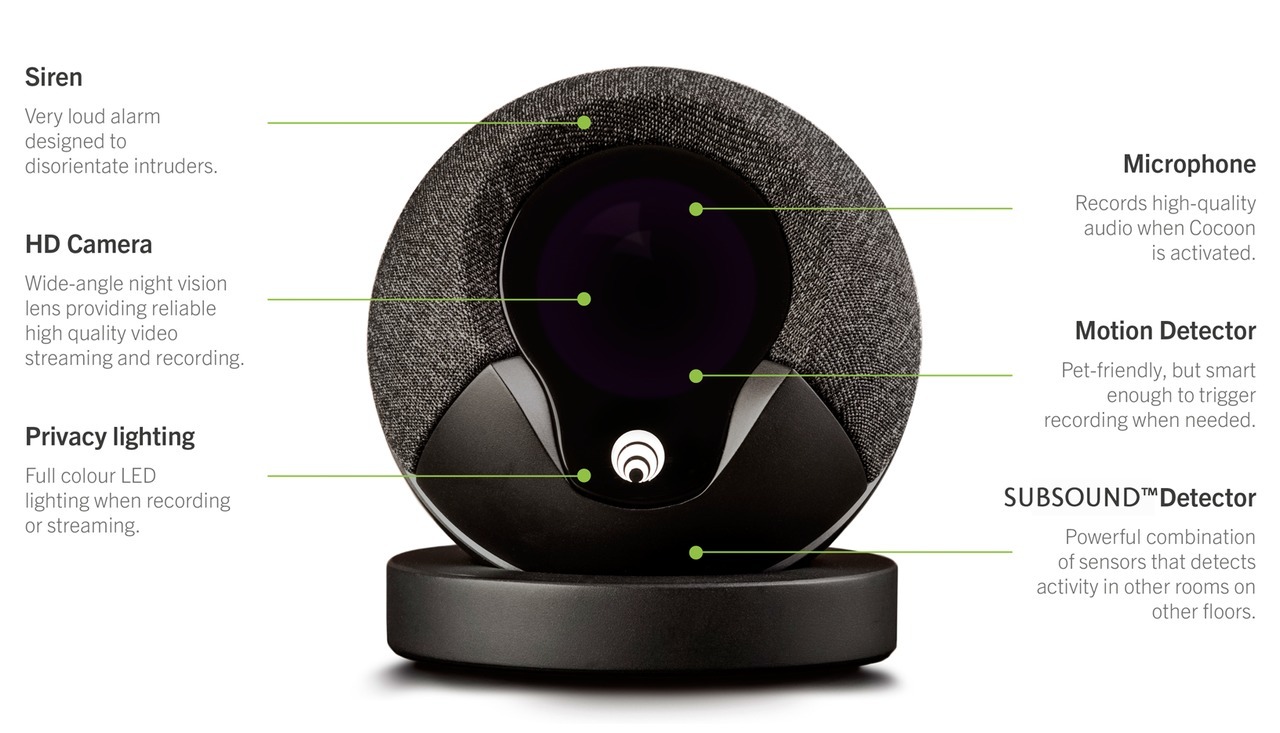 The unit packs all these sensors in a WiFi networked, fabric covered plastic ball designed to blend in like a piece of furniture. Pre-production price is pegged at $299, and although the companion app will manage multiple units, Cocoon makes the bold claim that one device is all you need for an entire house:

The basis for this bold claim is the 'Subsound Detector' sensors that pick up ultra-low frequency noise in the 'infrasound' 0 - 20Hz range.  Cocoon claims their sensor is sensitive to "things such as a door opening and human movement from another room in the same house. The waves generated travel around the house and through even the tiniest gaps beneath closed doors to our sensors."

While the unit's camera, PIR, and microphone is limited to essentially one room or line-of-sight, Cocoon claims it's Subsound sensor can pick up movements across a very large area. Given that low frequency long wavelengths can pass through walls and other obstructions, activity can be happening.

We know of no mainstream intrusion product claiming use of subsound detection, but we did find one from an infomercial.

Like Cocoon, Activator is also locally alarming, and works like a switch to turn on lights or music when infrasound is detected. However, Cocoon claims to take intelligence a step further by discerning whether such movement is typical and if it is from an authorized user before alarming.

This claimed intelligence results in 'send[ing] no false alarms'. This is because the sensor stack 'learns' behavior and adjusts sensitivity to activities contrary to 'normal'. The unit also detects when authorized users (app-enabled smartphones) are nearby, and mutes alarms. Only when a certain threshold of exceptions are noted, (ie: subsound detected when no one is home / nontypical PIR motion late at night) will the unit trigger siren alarm and push alerts to user cellphones.

We are skeptical of many of the claims for this still in development product.

The simple dynamics involved in any security system leave it prone to false alarms, much less a single device that claims it can monitor an entire house. Cocoon is barely past 'proof-of-concept' stage and is entering pre-production crowdsourcing, so no units have been field deployed, nor substantial testing has occurred.

In short, the company is not risking much when grossly overstating performance, yet stands to gain the dollars of eager 'early-adopters' buying into the hype.

Infrasound detection alone is fraught with many potential false-alarm sources, from wind buffeting panes of glass (subtle air pressure deltas), to nearby road vibrations, to even airplanes flying overhead. While Cocoon claims to filter much of these trouble sources out, the question is: just how many will it miss, and will that be acceptable to users?

Cocoon plans to launch its crowdfunding campaign on November 3rd, and is currently trying to build buzz by giving away 100 units to those who express pre-order interest first.  Also, the company is offering 'early bird' specials to those signing up in advance of the campaign by discounting the price to ~$179. At this point, the company is claiming more than 1000 have signed up for the early discounts so far.