Aiphone is one of the biggest names in the intercom industry, used often by integrators on projects of all sizes. However, due to the breadth of their line, not much clear guidance is available to users to help in choosing between their various lines. In this overview, we look at Aiphone's most commonly used series, the AX, JF, LEF, and others, and which applications they best fit.

For background, readers may review our door intercom tutorial, for the fundamentals of door intercom systems, and integrating them with VMS systems.

The Aiphone line is broad, with dozens of series for different applications, both audio/video, and audio only. With this many products available, there is much overlap, which may easily cause confusion for new users. The following are some of the most commonly used models:

These options are covered in more detail below.

The Aiphone line has a major weakness in high-end integrated security systems, as it is not currently integrated with any VMS or access control systems. The Aiphone AX series allows this integration via RS-232, but is not currently supported by any third-party systems. Users at this level will likely seek alternatives such as Commen or Zenitel, which are more widely supported. 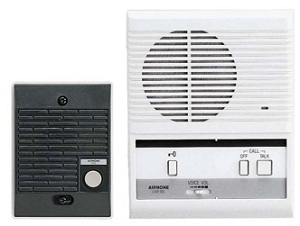 The LEF and LEM are used in locations where only audio is required, or which already have camera coverage, typically low door count, as they contain no internal camera. Relay outputs may be connected to IP camera digital inputs to provide video popup upon call, if desired.

These series are some of Aiphone's least expensive. An LEM kit containing one door and one master station is available online for under $100.

The JF and JK series are two of Aiphones most commonly used audio/visual systems. Both have similar door and master station options, with a few differences:

The JF and JK are most appropriate for facilities where only a single entrance is to be covered, such as small schools or commercial buildings. They may also be used internally in facilities with need of multiple secured doors, but without need for each door to be answered elsewhere in the building. This image shows the JK master and door station: 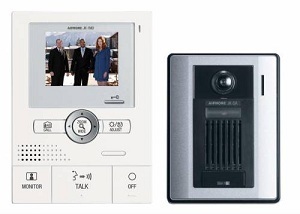 The JF and JK series are offered in kitted packages, with standard master and door stations included, or may be purchased as separate components. A JKS-1ADV JK series kit with one vandal resistant door station and one master station sells for about $400 online. The JF series is more expensive, due to its higher door/master station capability, with a 1:1 kit selling for about $700 online.

The AX series [link no longer available], one of Aiphone's more recent product entries, is an audio/visual intercom system which differs from most of the line in two key ways:

Due to its architecture, the AX is most suited to facilities with larger quantities of stations, such as corrections, healthcare, education, and parking. It may also be used where multiple independent systems are used, to provide common answering points for all stations. For example, instead of using three separate door/master systems for two entrances and a loading dock, a single AX may be used, so all stations may be answered elsewhere in the building.

The IS series is Aiphone's newest line, and integrates a number of intercom and emergency call functions usually handled by separate systems:

The IS series also introduces Aiphone's first PoE door and master stations. These stations communicate via the with the central exchange, or in a door-to-master configuration, or door-to-PC software master station, requiring no homerun cabling. The IS-IPMV master station is shown here: 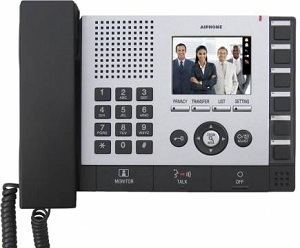 IS series intercoms are best suited to educational facilities. A single system may contain up to 160 doors, 160 masters, and 960 classrooms. Up to 32 independent systems may be connected, to function as a whole. This allows for district communication across all buildings, for example, potentially useful in emergency situations, or for general announcements.

The IS series is one of the most expensive in the Aiphone line. An IS-CCU central controller sells online for about $1,300. An IS-MV master station sells for approximately $450, and door stations start at about $200. PoE door stations increase in price by about $400.

Though the series above are most common, users should be aware of some of the other offerings in the Aiphone line, which are used in more specialized applications, such as:

While there are few competitors with Aiphone's breadth of product, both in pricing and feature set, there are options which compete with specific series at the high and low end: