All for just over $300 promotional pricing.

An incredible deal, on paper, from ACTi's "Catch All The Details" marketing campaign

We bought an ACTi E617 and tested it against other high megapixel (10MP and 4K) and a leading 3MP integrated IR camera to find out, including:

We tested it in full light and low light with IR on (below) to find out how it compares:

The ACTi E617 is available for ~$700 online (though currently, promotional pricing <$400 was available). There are few competitive 10 MP IR models available, though this price is lower than the Arecont AV10255PMIR-SH (~$1,020 online).

Due to its poor low light performance and lens quality issues, outperformed by even the much lower resolution (and lower cost) Hikvision 4132, the E617 is not recommended.

ACTi did not dispute our low light test results emphasizing that the:

The problem is 1/5s shutter is quite slow (6x slower than common 1/30s) and is guaranteed to create blurring on even people casually walking. Moreover, why not simply add more / stronger IR illumination? It would not add that much expense but it would radically increase the performance of the camera.

"The optical performance is the best when slightly zoomed in (not at the widest angle). The optical clarity may be less ideal at the edges when zoomed out all the way. The typical application of this camera is to use medium or narrow viewing angle, just like with vari-focal lenses."

However, we have not seen lens quality issues this severe in most other cameras. Beyond that, increasing the pixels only to throw it away with poor lensing is self-defeating.

Moving to higher resolutions is one way to differentiate oneself from growing competitors like Dahua and Hikvision. However, the increased resolution (e.g., ACTi 10MP) needs to actually deliver materially better image quality. This is now the second ACTi 10MP we have tested (also see ACTi E97 10MP Camera Test) that performed poorly.

Such an approach is bound to frustrate customers and decrease ACTi's overall reputation.

In this video, we take a brief look at the physical construction of the ACTi E617:

We started our testing by shooting the cameras side by side in our baseline conference room scene, noting image quality strengths and weaknesses and gathering bandwidth measurements.

Below is the ~24' HFOV used in the 4 camera shootout. The image below was taken from the ACTi E617. 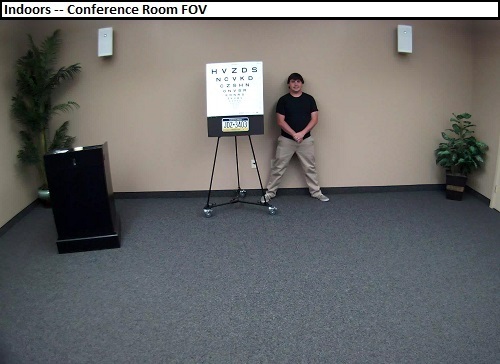 In full light, ACTi E617 image quality is comparable to other cameras tested, with PPF high in all cameras. The test chart becomes moderately washed out at line 6 in the E617, not seen in other cameras, though subject details are clear in all cameras. 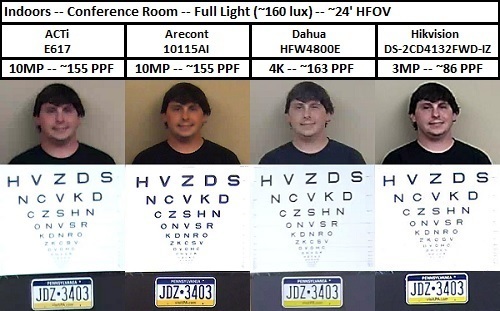 The E617's lens exhibited blurring, most visible at the ediges of the FOV, seen below with our subject in the corner of the room. Our subject's facial features and the background foliage are less defined, though the test chart in the center of the image is clear. 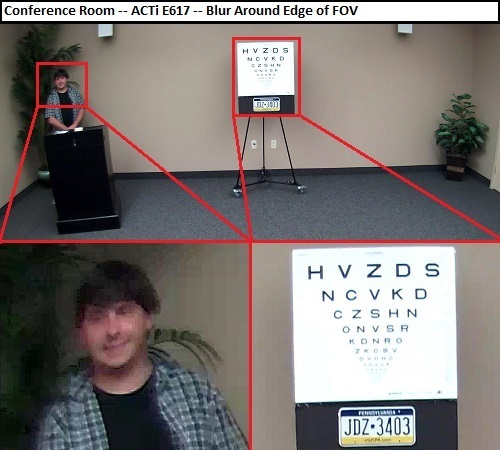 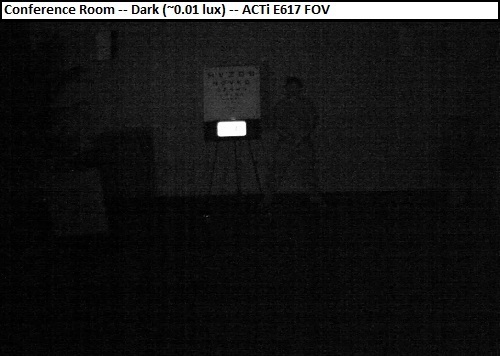 Comparisons to other cameras are seen below. The E617's images are significantly darker than the other integrated IR models (Dahua and Hikvision) tested. Notably, the Hikvision 4132 performs best at this light level, despite being 3MP, and about half the PPF of the 10MP and 4K models. The color only Arecont AV10115AI produces no usable images in this scene. 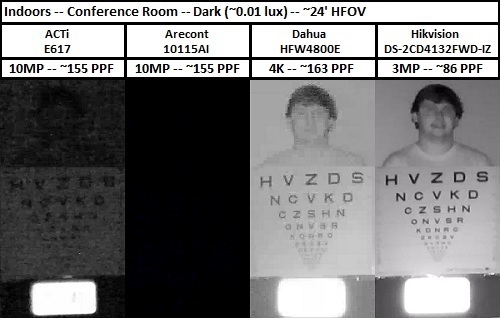 In an outdoor scene, without the reflective walls of the conference room, the ACTi E617 performs worse. Here, we can only minimally see our subject ~10' from the camera. Further back in the scene our subject becomes almost completely undetectable.

Listed is the following firmware used for testing: