Axis has launched an open VMS, with its new ACS5. What has historically been an Axis only offering is now suddenly a potential competitor to the many open VMSes in the market, including its corporate sibling Milestone.

But how well does it work? We downloaded ACS5 and the free trial license to try it out.

Here is a quick peek showing 4 manufacturers running inside ACS5:

Inside, we examine the 3 key strengths and 5 key weaknesses of ACS5.

ACS now has 2 types of licensing. Below is excerpted from our Axis Launches Open VMS (ACS5) report:

Right now, with no 3rd party VMD support, ACS5 will primarily be for those who want all Axis but just need to add in a few 3rd party cameras. However, once Axis adds that and cloud remote access, we believe that ACS5 will be a credible, but underpowered competitor, to open VMSes like Exacq and Milestone.

All third party cameras attempted (8 models from 5 manufacturers) worked without issues in ACS 5, with configuration of framerate and resolution functioning properly, and video continuously recorded.

ACS 5 does not support video motion detection on third party cameras. Camera side VMD is supported on Axis cameras only.

This means that non-Axis models are limited to continuous recording only, a significant limitation, as most VMSes support some form of motion detection (server or camera side) for many/most third party cameras.

Axis device compatibility tool checks compatibility with ACS5. Users enter the camera's IP address and credentials, and basic compatibility tests are run, essentially consisting of H.264 and MJPEG streaming, audio, and basic configuration (FPS/resolution). Axis specifies that devices must be ONVIF Profile S conformant, but ACS itself is not, and does not use the full Profile S spec for third party integrations, mainly only basic config and streaming.

Testing Avigilon, Bosch, FLIR/Dahua, Hikvision, and Sony, results were inconsistent, with some cameras passing and some failing, and results changing upon retest, without changing any other settings.

For example, we tested the Avigilon 3.0W-H3-B2, which fully passed all tests, shown as compatible. However, running the test a second time, the camera failed audio tests. Testing a third time, it passed once again.

Audio was the most common failure, a relatively minor concern given the rarity of audio streaming/recording. Only a single camera, the Hikvision DS-2CD2042WD-I failed video streaming tests (below). However, this camera worked fine in ACS once added. 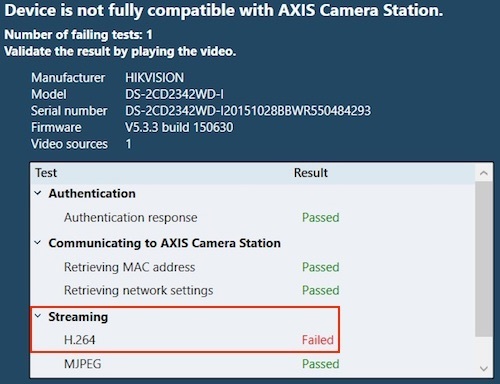 ACS offers strong advantages for end to end Axis systems, with the Axis Camera Management interface integrated directly into the client. This allows users to upgrade firmware, install ACAP applications, and configure cameras in bulk directly from the client. These functions are not supported in third party cameras. Note that configuration uses the Axis PlainConfig terminology, instead of simple language, which may be confusing for novice users.

Outside of the management interface, basic configuration options are available, such as brightness, contrast, WDR, etc., in addition to FPS/resolution/compression available for all cameras.

We review these features in this video:

ACS 5 adds a licensing portal through which users can manage their systems' licenses, see status, and add additional camera channels without needing to visit the site or access the server remotely. Licenses are activated and automatically pushed to the server via the internet. For sites without internet access, users may download a license file which can be imported to the server.

We show this portal in the video below:

Axis' new scrubbing feature allows users to simply click and drag through archived video, instead of requiring them to play back/forward at varying speeds or click to specific points in the timeline. This is new to ACS, but common in most other VMSes.

ACS 5 exports video in open .asf format only, without a proprietary player. Multiple cameras may be exported at one time, but without a proprietary/multi-camera player. A playlist is created containing all clips exported, but they are played back sequentially, not simultaneously.

Multiple ACS 5 recorders may be viewed and configured from one client instance, but user settings are not stored centrally. In order to set up multiple clients, users export a configuration file from a configured client, and import it to the next. Settings do not simply follow the user login saved to a central location.

Unlike the cloud connection found in their latest Axis Camera Companion release, ACS 5 requires manual port forwarding to remotely connect, either via client or mobile app (new with ACS 5). Users must manually enter the IP address or host name of each server they wish to connect to. By contrast, Axis Camera Companion 3 stores all sites to a user's Axis account, allowing them to log in remotely without manual setup.

CPU usage of the Axis Camera Station service itself was low, ~2-3% on an i7 2.6 GHz, with one 4K and 8 1080p cameras in use. This usage remained fairly consistent regardless of cameras/throughput in use.

Axis claims improved hardware decoding in ACS 5, but in our tests, we saw no difference with GPU decoding on or off. We have reached out to Axis for comment.

Axis Competitive Strategy on Apr 25, 2022
Axis Communications is in the midst of long-term structural competitive...
Axis Camera Station 5 VMS Tested on Dec 23, 2021
Axis Camera Station has moved into unified VMS and access control, offering a...
Axis Releases Unified VMS / ACS - Secure Entry on Feb 18, 2021
Axis is moving into the 'unified VMS and access' market, but they tell us the...
Directory Of 120 Video Management Software (VMS) Suppliers on Aug 30, 2018
This directory provides a list of Video Management Software providers to help...
Axis Employees Get $100 Bonus For Beating Out Avigilon on Oct 11, 2016
Axis offered its employees a $100 bonus for beating out Avigilon's VMS,...
Axis Wins ~$20 Billion Retailer With End to End Solution on Aug 22, 2016
Sorry, Axis partners, you are not needed here. Axis 3.0 is ramping up with...
Axis Lists Itself First Among VMSes on Aug 19, 2016
When you think of VMSes, who do you think of first? Well, Axis, the camera...
Camera Video Display Problems Tested on Mar 18, 2016
In the old days, displaying video was simple. Both cameras are monitors were...
Axis Launches Open VMS (ACS5) on Mar 10, 2016
Axis' VMS software has always been closed to Axis cameras only. [UPDATE:...
Axis End-to-End Solutions are Here! on May 20, 2015
The new Canon subsidiary and Milestone sibling has changed their go-to-market...
Axis Launches NVRs on Sep 29, 2014
The PC is dead? Not in the surveillance word, where boxes are the big...
Comments (13) : Subscribers only. Login. or Join.