A Postmortem of VideoIQ and the Future of Video Analytics

With Avigilon to acquire VideoIQ, we answer a number of critical questions inside:

VideoIQ aimed to be much more than analytics. Indeed, its main product acronym, ICVR [link no longer available], stands for: "Intelligent surveillance camera with video recording." The dream was all-in-one: a camera, video analytic and NVR in a single unit. And their cameras are literally huge [link no longer available] because they offer a hard drive inside for recording.

Edge storage might be hot today with SD cards, but when VideoIQ launched this offering 5+ years ago, depending on hard drives was essential.

Unfortunately, the hard drive inside a camera approach was as bizarre then as it is now. It created ugly, big, expensive camera / recorders that struggled to integrate with third party VMSes (specifically recorded video). VideoIQ tried to compensate for this by giving away recording licenses (like the Mobotix model) but with a very limited line of big ugly expensive cameras, it was hard to get broad traction.

VideoIQ's all-in-one dream clearly was a failure. One certainly could argue that it was ahead of its time (with advances in processing, SD card storage and standards - like ONVIF Profile G), this might become a reality later this decade. However, as a strategy launched in 2007 / 2008, it could not deliver competitive value with the technologies of its day.

On the other hand, VideoIQ clearly succeed with their video analytics. VideoIQ analytics work reliably with minimal configuration or technical training. This, unfortunately, cannot be taken for granted, with most analytics either suffering from severe false alerts or requiring very time consuming optimizations to overcome issues. Because the video analytics market has been such a failure, this is an accomplishment and justifies an acquisition.

Competitive Dynamics of the Surveillance Market

That megapixel has been far more successful than video analytics is not news, but to understand the gap, compare the current market capitalization of Avigilon, a publicly traded company, with the price they are paying for VideoIQ: 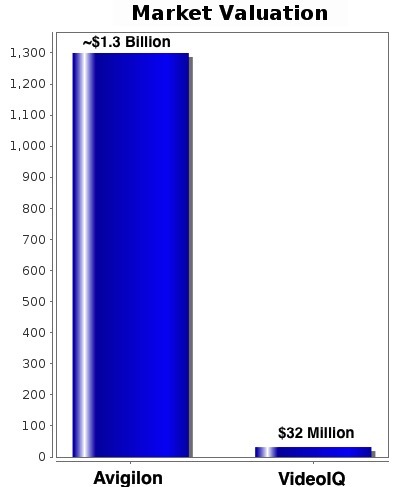 Avigilon is worth 40x more than VideoIQ, despite their similar origins and the fact that VideoIQ has been quite 'successful' as video analytic companies go.

While it seems impossible for VideoIQ to have matched Avigilon's market capitalization under any circumstances, they almost certainly would have generated far more revenue with a streamlined smart camera instead of an 'ICVR'.

From a marketing perspective, Avigilon will have a field day with VideoIQ. They claimed to 'prevent' crime even before they had analytics. Expect them to team up 'super megapixel' and 'crime prevention' as a powerful one / two combination.

On the product side, VideoIQ benefits most from weak competition, but their product portfolio is rather stagnant and burdened with unnecessary baggage. Eliminating the hard drive and packaging the analytics into a 'normal' form factor, such as their Integrated IR line would be powerful. Less weight, smaller size and lower cost could all be accomplished. In the interim, they still have a 'smart' encoder appliance, the Rialto, that allows them to integrate / upsell existing Avigilon camera users at a fairly high price, given the cost of that unit (see Rialto review).

What Competitors like Axis, Milestone and Genetec Should Do

The big problem is that there are no other broadly trusted, turn key analytic offerings in the market. Archerfish flamed out. OV sued everyone. BRS Labs is, well, BRS Labs. Sightlogix is still way too expensive for 95% of the market. Agent VI probably is the next closest though is hampered by having to load on 3rd party cameras and set it up. Worse, there are no startups that are close to being ready for mainstream use.

Avigilon is going to load up VideoIQ into their marketing machine and, rightfully, bash away at major players like Axis, Milestone and Genetec for not having such a critical component. Avigilon will be able to deliver an urgency and their loyal dealers will push hard to customers who have not considered analytics in year. Plus, Given Avigilon's competitor's track record, they probably will do nothing, and just let Avigilon continue to wipe the floor with them.

Axis, in particular, needs to solve this. The 'let's partner' approach is clearly hurting them. For example, there are more than a dozen analytic options to add on to Axis cameras but hard questions for users and dealers remain: which one works, with what cameras and which ones will Axis stand behind? When performance is not a concern, partnering is fine but tight integration is critical when it is a risk, as it is for analytics.

Axis believes the future is apps, not more megapixels, and, if they do not do something about it, Avigilon will be able to capitalize on the killer app - perimeter detection (from VideoIQ).

Axis does has some bright spots. Their VMD 2.1 is better than Avigilon's motion detection but bizarrely Axis does not promote it nor has it been able to gain wide 3rd party support. Moreover, Axis' $29 crossline application is fairly decent though not as robust as VideoIQ's for harder outdoor applications. Finally, Axis has finally started to add in more analytics but, so far, only to their highest end 1080p PTZ.

However, Axis (as well as other major camera manufacturers) needs a direct, embedded, VideoIQ alternative. Indeed, Milestone and Genetec need this just as much because depending on integrating video analytics from Avigilon into their open system, large scale users is quite a risk.