A new detector claims to do twice the work of its competitors. In response to growing legislation requiring carbon monoxide (CO) detectors in new construction, manufacturer System Sensor has developed a detector that combines both smoke and CO detection in a single unit. The company claims that its combo design reduces wire and installation costs by 'killing two birds with one stone'. However, does that claim hold under examination? In this note, we look deeper.

The Laws of CO Detection

While smoke detectors have been a mainstay of new construction since the 1970's, the laws requiring mandatory CO detection have developed much slower.

First issued in 1998, the NFPA 720 standard describes the full scope of CO detector placement, installation, and performance in buildings. In the US alone, 40 of 50 states require CO detection in one or more occupancy (building) types. While the exact requirements vary, most state have adopted it in multi-tennant occupancies, typically including:

Outside the US, "best practices" for life safety dictate use of CO detectors as well. For example, many Canadian provinces [link no longer available] require use of detectors in every residence and group occupancy regardless of rating.

System Sensor's 'i4 CO/Smoke' detector combines a photoelectric smoke and an electro-chemical CO sensor into a single wall or ceiling mount housing. The manufacturer's promo video below provides an overview of the sensor and it's companion 'interface module' that allow to be tied into common alarm panels:

The sensor is available in either 2 or 4 wire formats, and is powered via 12 or 24 VDC from the panel. A sensor uses 2 or 3 zones per panel; one zone independently for smoke and CO alarms, and an optional supervision or maintenance zone.

To use, sensors must be installed with companion 'interface modules' at the main alarm panel that monitor which type of alarm the detector is sending and coordinate multi-zone sounding if one unit goes into alarm.

For most houses, between 3 and 8 sensors are needed to cover all alarm points. An interface module allows connects up to 8 units, and larger facilities will require multiple interfaces.

Though recommendations for replacing CO sensor vary according to sensor types and local regulations, the i4's electrochemical type sensor is designed to be replaced every 6 years. The device sends an 'end of life' warning to the interface module to warn in advance of expiration. 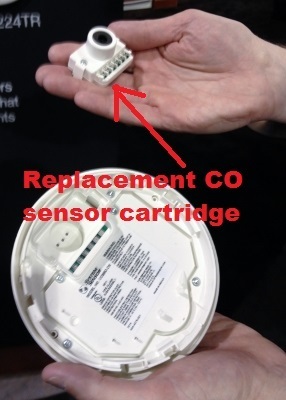 System Sensor sells product through dealer channels, and extended pricing is subject to sales volumes, but street pricing for i4 components is around:

The core value of the combo sensor is requiring less cabling and less installation labor than hanging separate devices. Potentially, using the i4 cost between 60 - 80% less than installing discrete sensors. While the cost of the sensor is ~100% more, half the installation labor and less than half the usual cabling is required. For the example 8 sensor system breaks down like this:

The projected savings using combo over discrete sensors is about $60 per job. A high volume installer can save over $10,000 inside the course of 150 jobs.

Aside from the potential cost advantages of a combo sensor, one aspect of design is a point of disagreement among authorities: Does a Ceiling mounted CO sensor detect as accurately as a Wall mounted Sensor?

The final determination is mixed on this point. While formal assessment bodies like UL and CSA certify ceiling mount detectors for use, several academic sources discount this practice as dangerous. While CO's density is more or less equal to air (Nitrogen), CO cools (and falls) at a faster rate. For this reason, some authorities suggest ceiling mounted detectors are less protective than those mounted at outlet heights, because CO accumulates at greater concentrations before triggering alarms.

For integrators or facilities maintenance groups who only occasionally install and replace smoke/CO detectors, the i4 Combo system does not offer compelling reason to switch from discrete, but less expensive, devices.

However, for those companies who regularly install and service these detectors, there is the potential to save thousands of dollars in a high-volume business. Likewise, for projects where inspection deadlines are tight, it can provide some schedule relief to install both smoke and CO detection in a single action, not only doubling the value of installation labor but also expediting the subsequent inspections by project AHJs at a single time.