It's 'award winning', but is it useful? With 3M Cogent's MiY-Touch fingerprint reader winning an ISC West 2013 "Judge's Choice" award, the #2 overall for the show and tops in access control, we wanted to dig deeper to find out why. Is the unit worthy of a "Best of" award, or is it just another fingerprint readers not quite demanded by the market?

While the ISC West NPS Showcase [link no longer available] bizarrely trumpeted the MiY-Touch as 'Fun to use', the device did not appear any more enjoyable than typical fingerprint readers. Alternatively, the claims of being 'fast' are difficult to validate on a trade show demo unit with a small number of fingerprints to match, compared with hundreds when actually deployed in the field.

However, given those caveats, the unit was responsive and low-profile, and weighed just over a pound, which means it can be mounted on drywall or delicate wall surfaces with little more than reinforcing anchors.

In default configuration, the unit can be used as a standalone access control reader, and door hardware and user records can be controlled within a single unit with no additional hardware needed. Aside from its lightness, the unit is on the small side, roughly comparable to a mid-range prox reader at ~6.5" x 4.5" X 2.0". The image below shows the unit's small size: 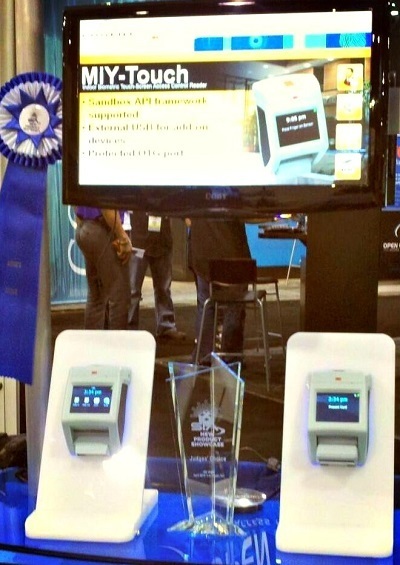 The MiY-Touch offer a range of notable features like:

The unit possesses some strengths that distinguish it from generic fingerprint readers:

However, the reader is not without potential shortcomings:

Needless to say, the mix of features in this 'award winning' unit position it ideally for high-security and government verticals. The fact it supports FIPS-201, PIV/CAC, and multi-factor credentialing hit several checkmarks for specification in those markets, but the overriding advantage of the unit (low cost) is offset in commercial verticals by the lack of Prox support.