In this age of classroom shootings, many are looking for barricade locks - a cheap and easy stopgap to bolster door security.

Critics condemn barricade locks as dangerous and even deadly because they do not satisfy basic building codes, while proponents claim their simple operation and cheap price outweigh the risks.

Access dealers, worried parents, and school administrators alike have waited to see if building code exemptions would be made.

The world's biggest building code group have weighed all these arguments, and made clear their position in the upcoming 2018 edition of international building codes. Inside, we examine the changes, the proposed code, and where current barricade locks run foul.

For the new 2018 version of IBC, the industry group responsible for proposing lock and egress codes BHMA has published their recommended language for 2018 IBC 1010.1.4 [link no longer available], called "Classroom Lock Requirements':

Even with the clarification, most (if not all) existing barricade device products will remain forbidden. For example, these ~$125 devices which have gone viral on Facebook:

As an example, these simply will not meet the clarified requirements, specifically:

"The door shall be capable of being unlocked from outside the room with a key or other approved means" and "Modifications shall not be made to listed panic hardware, fire door hardware or door closers." (emphasis ours)

We examined this barricade lock series, and a range of other similar products in our Barricade Locks - Pros vs Cons note. Because the majority of these devices are little more than improvised hardware, prevailing concerns and objections to their use still apply in the scope of the new language.

For Many Countries, IBC Codes Are Laws

IBC language changes are important, because they directly compose architectural laws in many areas of the world. Especially for systems like access control, where many products might unintentionally contribute to injury or death of building occupants when used incorrectly, codes like IBC are important to observe to maintain life safety. If products do not meet these codes, punitive fines, building closure, and urgent corrective actions can be enforced by courts and police.

For the 'classroom lock' market, IBC requires all products or devices for securing doors must satisfy code requirements designated by version or year.  While the 2018 IBC version will not be ratified as the authoritative code in all areas immediately, in three to five years it will be the most widely used and referred to version in North America and many part of the world.

For more on the jurisdiction of IBC and other important building codes commonly applied to locks and access control, see:

In our previous reports on barricade locks and after laying out the potential upsides and risks of the units, IPVM member opinions remain mixed on whether or not IBC barricade lock prohibition is too strong and should be exempted for classrooms: 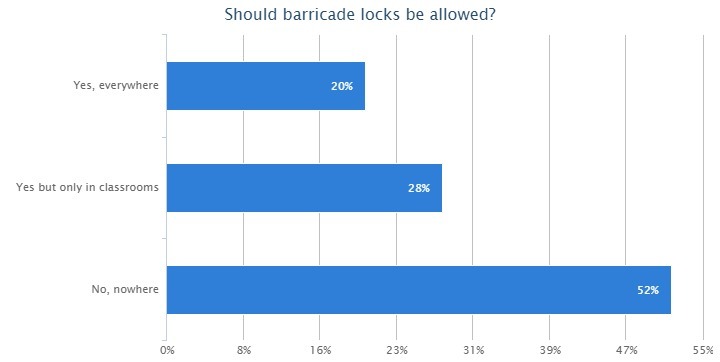 Indeed, opinions are mixed nearly 50/50 between continuation of the ban and outright or conditional acceptance in classrooms.

In any case, IBC has upheld its former prohibition and shows no signs of changing in the future.

Related: The Ohio building standards board on Friday gave final approval to rules allowing schools to deploy barricade devices in the event of an active shooter...

Lori Greene published a piece citing a lawsuit centered on barricade lock use: 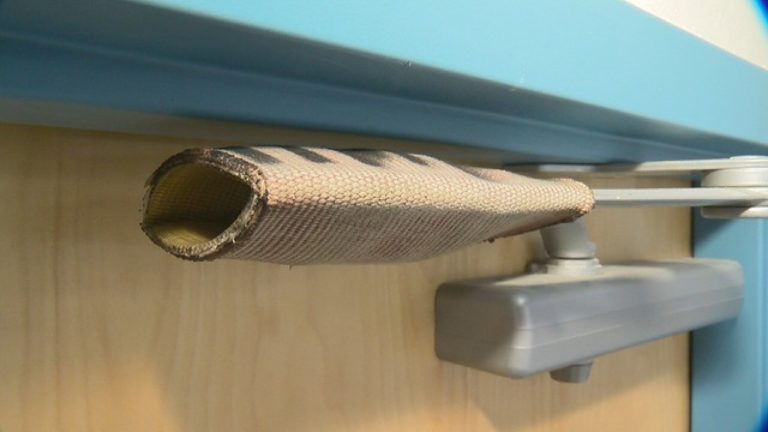 The Haven guys were on Shark Tank a couple of weeks ago.  They didn't get a deal from the sharks, but they said they got a 90 some odd piece order from a school system.  If anyone saw the demo on the show, you would have thought it was initially an intentional prank by the Haven founders, but in reality, one of them had a problem kicking in a door with a conventional deadbolt lock that was supposed to be able to be broken into with 5 or 6 kicks.  They eventually got it broken into, but by that time all the sharks were in a giggle fit.

I don't think they really were given the time to go into any depth about the product and it was positioned mainly for residential use in the pitch.  They weren't able to show the any of the manual override methods of releasing the door from the inside.

Is it still a violation of current building and life safety code to use the Haven device on a school/office door?  Has anyone deployed the Haven yet in a commercial or institutional application?

I applaud all the ingenuity of the different devices people have devised and come up with but in the end all these devices require human intervention at each and every single door. Not sure about the "Haven Guys" product though. First problem is unless they train the teachers and staff and students day in and day out, as say the military or first responders do, the majority of the classrooms aren't going to get any of these devices put in place. Way too much confusion and stress going on to accomplish this. There first action will be to gather the students and not worry about a door that should already be closed and locked.

Last I knew there hasn't been an active shooter at a school penetrate a locked classroom door. Could be wrong about this though.

Second is the "What if" scenario where someone gets locked into the classroom with either the assailant or an incendiary device gets tossed into the room from the outside or other means then you can't get out of the classroom in a timely manner.

I know in my daughters school where she is a teacher and many others I have visited or done work at the classroom doors are supposed to be shut and locked during the day, usually fire and smoke related. Unfortunately most of the time the doors are propped open with a wedge all day long. They typically will let everyone know when the fire marshal will be on site for inspections so the teachers can shut the doors and hide the door prop devices.

I was on a walk through with a school police office last year and the stuff we saw on our walk through to discuss locking the school down with electronics was quite interesting. He constantly had to close classroom doors as we walked through. The worst was a door propped open to a small back parking lot next to the music/theater department and no one was at the door for a good five minutes. When the teacher finally came out and the officer asked why the door was propped open and then asked why it shouldn't be the teacher had no clue whatsoever. He said "I don't see what the big deal is, the students are just outside unloading equipment." He didn't understand that it only takes a few moments for an intruder to come into the building through an unsupervised door being open.

The funniest part (to me) about Haven is that they posted on a subreddit that I frequent a year or so ago, and while some of the response was positive, the vast majority of it was, in essence, "this is a terrible idea because of egress". They were adamant and actually downright rude in their responses. and said they were going to proceed anyways.

The other thing that the Haven guys clearly don't understand is that while kicking a door is one thing, a good-sized crowbar will blow out the (likely tubular) locking mechanism on most any residential door with relative ease. After that, since Haven is only holding at the bottom, it wouldn't be difficult at all to break or bend most doors enough to get past it. It's just a really terrible design all around and doesn't really solve a problem in a meaningful way. If someone wants in, they're going to get in.

To the note above, the remote unlock from outside the door would not be sufficient to meet building codes. The "key or other approved means" does not include any sort of a network-related release function -- there must be a mechanical override of some type, either by a direct key or by a mechanical keyswitch that will break power (i.e. maglock).