Check this pitch out: 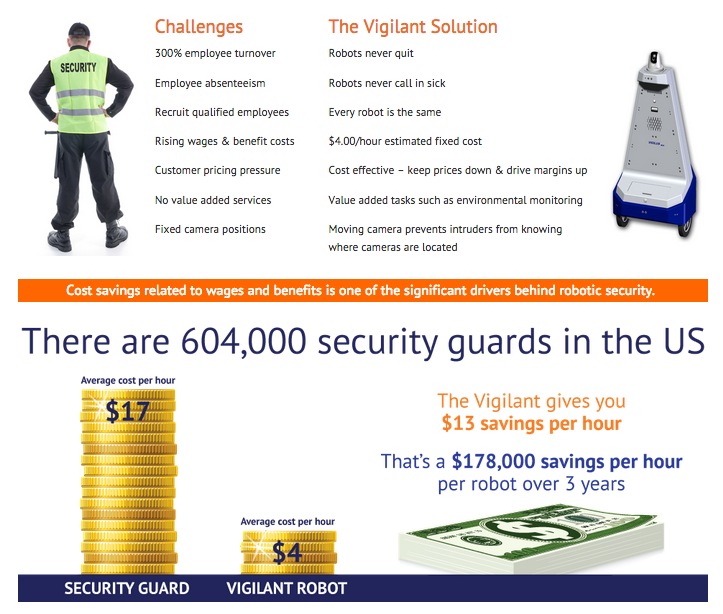 On the other hand, the Vigilant robot maxes out at ~2 miles an hour, has difficulty 'walking' and can't climb steps, all simple things for a guard.

In order to replace guards you primarily have to go THROUGH the guarding companies.

Guard companies have contracts with various end-users for guard services.

The end-users aren't interested in completely up-ending that arrangement most of the time, unless there is very clear ROI.

The guard companies are staffed by upper-management types who are essentially bonused based on the number of guarding-hours they sell, which is directly linked to top-line revenue for the company.

Guard companies in general are NOT interested in reducing revenue, which means they're not interested in replacing guards with technology unless absolutely forced to by their customers.

A pet rock would be even cheaper than a robot guard and save even more money. It has about the same overall effectiveness as the robot.

While I see that Vigilant tries to make some comparisons to human guards, that really really has zero impact. They need to show some specific examples or case-studies where robots have a proven ability to replace guards, reduce costs and not simultaneously reduce security or increase overall loss/liability.

Now, combine robotic security guards with hdcctv and then I think you've really got something.

"A pet rock would be even cheaper than a robot guard and save even more money. It has about the same overall effectiveness as the robot."

Now I feel silly for recommending you to be Vigilant's VP of sales this morning....

I just hope they obey the Three Laws of Robotics, otherwise no dice.