Which Manufacturers Sell Their Own Dummy Cameras?

In the past couple days I've noticed these two familiarly branded decoys: 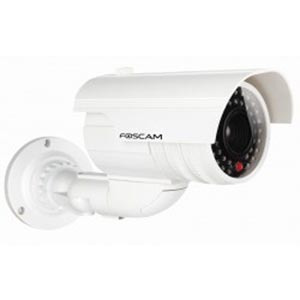 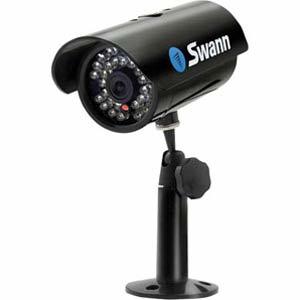 I know that Swann OEM's from China, but isn't Foscam a 'real' manufacturer? Doesn't it sound like a crazy idea for a real manufacturer to come out with a 'dummy line'...

The marketing blurb might say: 'Foscam is proud to announce its 2015 FauxScam Line, designed for those customers willing to take a chance on crime, but never on brand name...'

But then again, if the dummies are patterned after their real ones, in addition to criminals, they might fool other prospective customers in to thinking that they are real, thus enhancing their brand awareness.

Foscam might make 'real' cameras but they are far from a premium brand.

There may be some 'real' manufacturer who makes / sells dummy cameras but I bet they would downplay it as (1) selling something for $20 instead of $200 is not a great idea and (2) their integrator customers hate dummy cameras, partially for legitimate security concerns, partially because it undermines their reason for existence.

Isn't there some legal issues about providing a "false sense of security" if you install and utilize dummy domes?

No, none that has ever been proven. It appears to be more of an urban myth. See: Rape Under A Dummy Camera - Is This A True Story?

Btw, to elaborate, as we discuss in the link above, US courts have generally found that surveillance cameras do not provide security, ergo dummy cameras cannot, by definition, provide a 'false sense' of security.

Finally, a job I am qualified to do. Phone support for dummy cameras.

The most believable dummy cameras I've seen are from Q-See, because as far as I can tell, they use the same housing and LED ring as their actual cameras.

One of them is non-operational. Granted, they're also an OEM, and they're not exactly a major brand, but you can buy them at Costco, and I've seen the dummies pop up at Home Depot lately.

Have you seen both the dummies and real cameras at the same store? Side by side end cap?

Buy one real get 2 dummies free!

Here's what I'm really trying to say about selling both dummies and real cameras with the same logo, on retail shelves.

If a criminal sees a Q-see dummy display at Home Depot, he may have the impression that Q-see is only a maker of dummy cameras, and therefore will not be deterred when he sees the logo on a real camera.

Conversely, if a criminal sees a Q-see real camera display at Costco, he may have the impression that Q-see is only a maker of real cameras, and therefore will be deterred when he sees the logo on a dummy camera.

Conclusion, unless Q-see, (and Swann, Night Owl, etc) care more about their dummy business, they should stop the identical branding practice at once, and come up with a unique dummy brand name.

Maybe, but I tend to categorize this in with the people who think when you are away from home you need a timer for your lights that turns them on/off at a semi-random time daily.

In the typical case the average burglar is not spending a lot of time on reconnaissance. They're not watching what times your lights come on and off (and, if they are, they'll quickly realize there is no human activity around the house, regardless of the light schedule), they're not scanning for security cameras or ADT's yard signs and stickers on the windows.

IMO, dummy cameras are mostly sold to dummies who think that this kind of thing has some sort of real deterrent value. Wanna-be criminals are not scanning the aisles at Home Depot and memorizing the real cameras and dummy camera housings.

Dummy cameras are simply manufacturers exploiting basic Economics 101. Some people want a high value item, some people want a low value item, and offering "selection", and pricing things accordingly, helps push customers to the product you *want* to sell them. They already have 10,000 housings from the last run, and maybe even have some housings or whole camera units that didn't pass a QA test. Slap a $20 price on them and put 'em on Amazon, and you'll make a little money on otherwise valueless inventory, and meet some low-end demand from the market.

From a burglar survey, no dummy questions though. :(

But for arguments sake let's say you are right and burglars are either clueless or could care less.

Fair question: You buy a top of the line Foscam system, (I know, I know, just pretend...), you peel and place the Fostickers, you plant the Fostake, you practice your wireless PTZ moves and imagine the look of a would be trespasser as he dejectedly moves past your fortress to another less defended bastion.  All good.  Then you see at another store at the 1/10 the cost, the identical Foscam dummy setup. Are you happy?

I just don't think that it is worth the brand hit. To be clear, I'm not saying they shouldn't sell dummies; only that they shouldn't brand them the same.

I think people purchasing security cameras often do so expecting to capture that high-res mugshot of the criminal on their doorstep. Then, they take that to the local police, who know exactly who the person is and where they live, they've just been waiting for that one piece of irrefutable evidence to haul them in.

The person who purchases cameras to be cameras looks at the dummy system and scoffs at the sheer lack of purpose it serves.

Or maybe not, just another perspective. I don't think dummy cam sales really amount to anything all that significant one way or the other.

Update: After looking at the websites of a couple of these suppliers I see why they do it.

They are promoting hybrid systems consisting of both real and fake cameras together. So the fake ones have to look the same as the real ones.

If you want just a little extra deterrence you might choose a 2:1 fake to real ratio, the more adventurous might go 5:1 or greater!

"Real" manufacturers who currently offer or have offered dummy cameras based on actual working models: