Which Lightmeter Do You Use?

When it comes to good lightmeters, what do you use? When I was an integrator, I preferred the Extech LT300, and mainly chose it based on cost (<$200) and the fact it registered <1 lux (0.00). The hold feature was wonky, and it wasn't always repeatable with accuracy though (+/- 5 lux common). 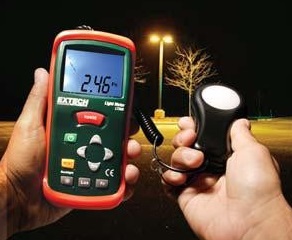 Now there are much fancier and newer units out there. What do you use? What features would you like to have?

Thanks for the response/info Carl. I had been holding off making a purchase and will due to the marketing and not the reality and the Extech units look good.

By the way, to contradict my first paragraph, Extech also makes the LT40 "LED Light Meter" and the LT45 "Colored LED Light Meter" for white and colored LEDs respectively. They also make the HD450 and SDL400 meters with datalogging, but I don't believe they "talk".

Visible light equals visible light. I don't see why a meter would be any less useful for LED lighting than for any other type. You might make a case for IR and/or UV measurement since Extech claims "Utilizes precision photo diode and color correction filter". I would assume that filters out most invisible light.

I also prefer the detached sensor head. I can have the meter in plain view while moving the sensor around rather than having to contort myself reading the meter.

Since this is a light meter thread, I have an additional question regarding the type of lighting the meter is built for. I have seen light meters that indicate they are for standard, mercury, sodium etc. lights and then meters that are for LED. I have not found a meter that indicates it is usefull for both LED and other light sources. Is this a marketing ploy or are older meters unable to properly read LED lighting/temp?

I have had several light meters over the years. I am currently using the Extech LT300 myself. I like the display backlighting feature that can be turned on when needed (on some of my surveys, it's so dark that you can't read the meter.) Its also quite rugged. What I don't like about this meter is the detached sensor head. It's tough to hold the meter, sensor, and try to write light readings on a clipboard at the same time. There is a tripod mount on the back of the meter, but IMO, it should be on the sensor head instead of the body of the meter.

I also have a Minolta T10A which was quite expensive (over $1,000). I thought spending more and buying a "professional" grade meter would give me better results, but that is not the case. This meter doesn't have backlighting and is quite fragile compared to the Extech. One drop on the pavement and this guy would be toast.

I got together with an electrical engineer one night to survey a big parking lot. He brought his meter (also a Minolta) and I brought my two and we set them side by side to compare readings. None of them matched - there was at least a 10% variation in readings between meters in the same spot.

I think that in our line of work, we are just trying to establish an order of magnitude anyway. Is the light on the order of 100 lux, 10 lux, 1 lux or .1 lux? For these reasons, I don't think that having a super accurate meter would give you much anyway.

Features I would like to see: Autologging feature with GPS coordinates, voice announcement feature that speaks the readings as I take them.

We use the same Extech meter pictured. It is accurate enough for our purposes and still works fine. In fact, I believe John bought the Extech on my recommendation.