Like you, every day I get weird emails from no-name Chinese manufacturers who want to sell me their latest and greatest cameras.

However, today's email was especially weird because they included pictures. Usually, it's just generic pictures of cameras or DVRs but today they sent me a picture of their 'workshop', like so: 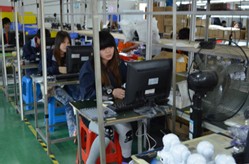 A few things come to mind:

Evidently, they included this picture to impress me but I am just confused. Is this impressive compared to other Chinese 'workshops'?

I've actually seen other images of Chinese factories where the workers were wearing coats and hats. I immediately thought they just didn't heat the place, but maybe there's some other explanation... maybe?

Come on they are uniforms - can't you tell?

I'm sure the idea is to assure you it's a real company with real people, and not some shadow company where they just want to take your money. But they can't afford an effective marketing photographer.

Based on a trip to China (northern and southern) and a couple of similar factories, yes. Heat in buildings is not always common. In the touristy parts climate control is as you would expect. In a couple of office and government buildings I went to that were off the beaten path, it was about 60F inside. Also, it was very common to see very little lighting in hallways and things like that.

No idea, but I don't think this is atypical.

From what I've seen in both China and Japan, there are random-odd American culture influences. They often will see a logo or image, but have no idea of its context, so it winds up in strange places. A skull and crossbones on office wear. A 5 year wearing a t-shirt with a Jack Daniels bottle and the words "Happy Drink!".

They simply want to present themselves as intimidating to potential Bands of Chinese Gangster/Counterfeiters.

Just like you don't pick on a dude in Compton wearing Oakland Raiders gear, you don't mess with a DVR tech wearing the Skull 'n Bones.

What I find humorous is the american names they choose to use. Sometimes they will pick a very tough name, such as "Duke". And then I get some really odd ones, for example, this girl called herself "onehundred"

There was a notorious surveillance camera spammer that used the name "Elvis". :)

I'm trying to figure out what these workwers are doing at these tine workstations, not big enough to do assembly. Is this tech support?