What Percentage Of People Use Surveillance Cameras At Home?

We are currently running a survey of 1000+ consumers (general population, not surveillance people) asking them if they use a surveillance camera (or cameras) at home.

I want to compare our guesses to the consumer survey.

Are you differentiating webcams from 'surveillance' cameras?

good question marty... with the removal of webcams i would guess around 2%...

You can differentiate between the two if you want. Either way, make a guess.

Bonus question: What rate do you think use is growing at year over year? 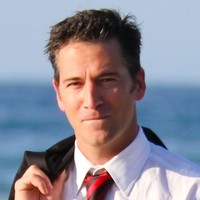 I hate to be picky here, but you have to define this better. 90% of my friends who have babies are using a nanny cam. If you ask them, they would say yes, they are using a surveillance camera...

What about those who use their USB webcam to look at their home when they are away?

So, if you ask how many people use ANY camera that can be monitored/recorded, I would say 5%.

If you narrow it down to true surveillance systems like most of the people who participate in the discussion here have in their house, maybe 0.01%

I am not trying to narrow it down to 'true surveillance systems' by which I assume you mean professional systems with 4+ cameras. I am curious if people use anything to monitor their houses.

I think the rate is higher than most people would expect, but also very regionalized (eg: I see more basic/general residentail CCTV in NJ than IA).

Overall, it's probably around 3-4% of all homes have some kind of basic CCTV in use. Growth rate is probably about 25%. If you look at some of the back and forth that Home Depot and Lowes have done with various DIY home camera systems, it seems that there is a lot of demand (relatively speaking), but it's spread over too many vendors to make any one hugely successful.

My guess is 10% with 1% haveing a true IP setup with storage and email notifactaions.

It's an interesting question, because I suspect there would be some "Joe Average" consumers who have "security cameras", but might say no to the survey because they equate "surveillance cameras" with something more professional/high-tech/expensive/industrial/commercial.

That's just a guess, of course, but I can think of a few times I've mentioned "surveillance cameras" to people, only to be met with a blank look, until I re-phrase it as "security cameras". MOST people seem to view the two terms interchangeably, but not all.

Anyway, my guess would be around 5%. They seem to be popular items, I know plenty of people who talk about getting a system (usually something from Costco), but not a lot that actually have.

I think it'll be low, but I know it'll grow as IP comes around and prices lower, and wireless gets better.

Between 5% - 10%, and it's probably doubled in the last 3 years. The people opting for IP at home are way less than 1% of the total, and many of those are probably members of this site.

In Sydeny, Australia I would say less then 5% - I go through many streets with no camera at all.

However, new homes are uptaking video intercoms and CCTV at rates I would say about a third of alarms. And alarms I would say are being fitted in 50% of new homes, so growth is definitely there - maybe at a rate of 10% per annum overall? I see new homes as the main driver - people seem to think that a new house requires new protection technology.

Bohan, I do not see many streets with cameras at all. However, outdoor cameras in homes is more expensive and complex, so it means someone either is a technical hobbyist (e.g., Ethan has 17 cameras mounted on the outside of his house) or is quite wealthy.

I do wonder how many cameras are installed indoors, either monitoring indoors or looking out a window.

Here's our results from the Google Consumer Survey of 1300+ people, a stunning high number of 15%: 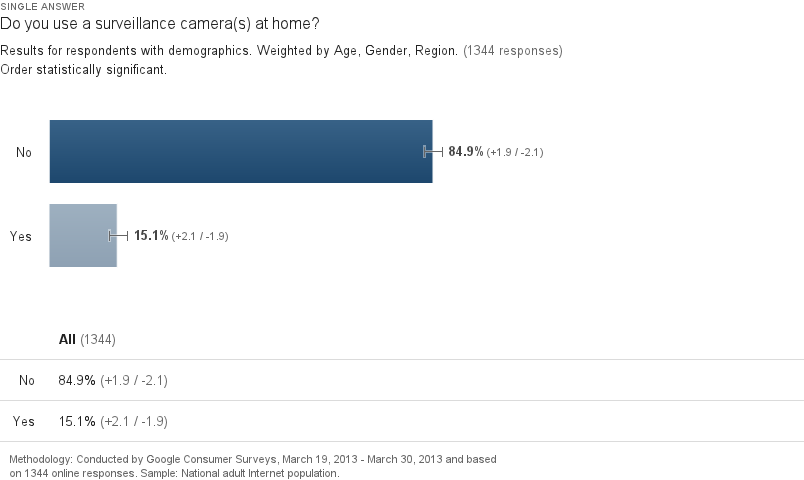 The question is now: Are the results just wrong? Is the question asked poorly worded/confusing? Does this being asked to people on the Internet skew the results? Are we severely underestimating the use of surveillance cameras at home?

Note: Google's surveys are one off questions so you do not get really any color, so there's little additional details that could help explain why this number is what it is.

Frankly, I find the results interesting, but not too surprising. Despite my earlier thoughts about Joe Average's interpretation of terms like "surveillance" vs. "security" or "CCTV" cameras, there could also be a number who may have once bought some cameras or a system that no long work... or bought a home that came with cameras that may or may not work.

Of course, if this is an online Google survey, I suppose there's a potential skew in that people answering will already be at least somewhat tech-savvy; the numbers might be lower if you included people who aren't online or don't go online for anything other than reading the grandkids' email or something...

Evidently, 78% of Americans use the Internet. If you assume that everyone not using the Internet does not use a surveillance camera, that would put the true number at 10-12% for home surveillance use.

A slight, but still noticeable difference. Don't forget those who use the internet but for one reason or another, would never come across or take part in Google's survey. I have several older family members, a few friends, and a couple customers who don't do social networks at all, but merely email with the family (maybe once every week or two), and do very little else online, but would still count as being among those using the internet.

Of course, we could debate Google's methodology forever - Twain's words (or Disraeli's, depending on who you ask) still apply ;)

I still say the results are interesting, but not surprising to me :)

Maybe 10% of people who responded are just liars.... can't discount that.

Matt, it's fair to debate the methodology, but you should actually look it up before making assumptions. Google claims they partner with publishers and run it on various websites - not necessarily social networks.

I doubt people would lie on this but I do suspect the sampling is skewing the results. I just don't know how much and how to overcome that.

I disagree. Lots of people want to associate themselves (even if only in their own minds) with things that are either 'new' or 'cool', or 'in'. For instance, if you polled 100 random, anonymous car drivers (of which 5 actually owned corvettes) if they drove a corvette, I bet you'd get 7 or 8 that said they did.

I admit I might be a wee bit jaded, but humans are strange animals... :)

Are the results from the US only?

There are many countries where 'home security' means something drastically more than just an intrusion alarm. Central America, South Africa, and the Baltic states come to mind... Internet users in those regions tend to be affluent, too, so I can easily imagine they would deploy some form of video surveillance.

For the result, my gut has a hard time guessing above my initial estimate between 5% - 10% in the US.

"Google claims they partner with publishers and run it on various websites - not necessarily social networks."

I wasn't meaning they ran the survey via social networks... I actually got distracted mid-thought there and didn't complete it properly. The main point some people don't do ANYTHING with their internet other than occasional email, maybe a little Skype with family, etc. These would qualify as "Americans with internet", but they're not a segment that would be likely to respond to online surveys anyway, regardless of where or how it was presented.

There's a quote on this article from the Columbus Dispatch on home surveillance cameras which is relevant to this conversation:

Coming across footage of a crime at a residence doesn’t happen often, said Sgt. Greg Hoyle, a burglary-squad supervisor. Of more than 29,000 theft and burglary reports last year, only about a dozen had home-surveillance video as evidence.

That's something like .04%? Granted, that's incidents which had video evidence, so some could have had cameras, but not caught anything. It also doesn't take nannycams, etc., into account.

That being said, that's the sort of percentage that seems more realistic to me than even 5%.

That is consistent with our Google survey number.

I would have thought less than 1% in Canada. No one in my circle of friends has a cctv system at home

the survey numbers seem incredibly high! Very interesting that the actual reality is so far from my impression