What Kind Of Camera Is This Samsung? SDI, TVI, AHD, IP?

Can you tell what the technology of this Samsung camera is just by looking at the spec sheet? Here are some clues:

Are they being purposely evasive or is it just so low end that it doesn't get a real sheet?

I'm guessing it's SDI based on the SDC in the model number and the 100m limitation, but isn't SDI natively coax? And the POE without IP seems unusual. Plus from what I've read here this is a pretty good price for SDI with 1080P and built-in IR for outdoors, no?

"The camera is essentially same as HD-SDI camera, but we send the HD-SDI signal over UTP instead of coax.The cost is similar to the HD-SDI. It's not like CVI or TVI at all. We are still sending digital signal over UTP."

None of the above.

Samsung refers to it as 'HD UTP' (in their DVR user manual). It appears to be a proprietary IP camera optimized for easy connection to their DVRs.

"The camera is essentially same as HD-SDI camera, but we send the HD-SDI signal over UTP instead of coax.

An Amazon reviewer has some interesting color:

"When I went to Samsung's US web site and went to the IP Camera section, this camera is listed on the IP Camera landing (under "Category Top Products"). Confused? So am I. So... long story short... Samsung has 96 different camera models, 3 of these (new models) SDC-9440BU, SDC-7340BC, SDC-5340BC have an Ethernet jack, are not usable as an IP cameras without Samsung's DVR.

Plot twist; the camera does operate on a IP network, it does request a DHCP address, but running a port-scan reveals no open services on the IP address."

To that end, it's an interesting approach by Samsung, but sucks to be the person who buys that camera and tries to connect it to anything else.

None of the above...It appears to be a proprietary IP camera...

So I'm guessing we have three kinds of IP cameras,

So there can be some consumer benefit to even the un-certified use of the ONVIF product logo: namely, you at least know they're trying to be compliant and you have a good shot a getting a basic stream. And if they don't use the non-logoed word ONVIF in their copy at all, good luck... ;)

One strange thing, why do you suppose they include this (and only this) wiring diagram of the rj-45 60 ft. cable? (Manual page 22)

I believe its actually referring to another samsung prop. Rj-45 standard, for analog, that is.  I know that this dvr is a hybrid (analog 960H and HD-TX) but does it really accept both analog or ethernet rj-45 inputs?

Why would Samsung not be more obvious about what this camera is? They are going to get hammered with returns from those who buy this camera thinking it is a regular IP cam.

At what appears to be a very low price compared to other IP cameras that use similar-sounding specs, they seem to be intentionally luring in the half-learned - those that know something about IP camera specs but have no real understanding of what the spec terms actually mean.

My favorite is the minimum cable length spec

Related: the Amazon reviewer cited above gave it 1 star because of this exact confusion / issue.

Don't worry though, this is just an early glimpse of the problems that will arise with the incompatible analog HD offerings coming....

My favorite is the minimum cable length spec.

Well that settles it. I'm gonna fill up my car with non-volatile gasoline and drive right out to buy me some of these beauties.

Either this is a UTP based analog HD camera or it is a proprietary IP camera, but it is not both. That is some seriously crappy, misleading spec writing. Maybe Samsung's usually-impressive QC needs to be aimed squarely at their spec writers for this product line. Or perhaps this sheet was produced by the seller, rather than by Samsung? It does read more like a sloppy Ebay posting than a document from a company as detail-oriented as Samsung.

On a broader note, I am heartened to know what products are going to fill the void in my life left by the disappearance of junky analog camera kits with combo monitor/quads and pre-made cables with proprietary connectors. I do so miss having to explain to customers at least once a week that "yes, you have an existing camera system, yes we install and service camera systems, and no I'm not going to waste my time or your money trying to add cameras to your proprietary system, and no I'm not going to spend two days of my time trying to track down a $25 replacement camera for your system." Comforting to know HD camera technology has finally advanced sufficiently that I won't have to suffer without those conversations much longer. Thank you, HD manufacturers. We are all in your debt.

Looking at it, I don't think these camera are IP. The only thing that makes it sounds like IP whatsoever is the reference to PoE, which I think is just a misnomer. Based on that pin out, it looks like it's proprietary HD over UTP of some sort. It clearly refers to the RJ45 ports as HD UTP in that diagram above.

The back of the unit has BNCs for analog, and clearly says you can only connect HD UTP cameras to the RJ45 ports. 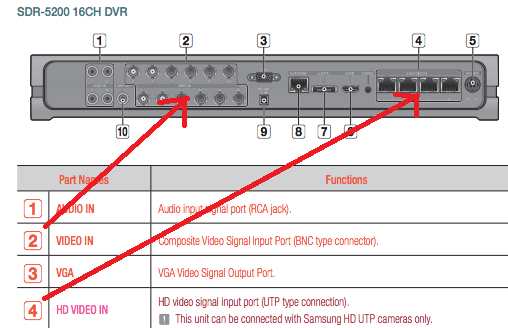 Maybe it's using CVI or TVI or AHD, but it doesn't specify, obviously.

Whatever it is, it's a step back to the days of the proprietary UTP systems of yore. At the old place we sold and installed a bunch of Bosch observation kits, and years later when they were discontinued, trying to hack things together to keep them running or replace cameras was a nightmare.

I agree that if it's IP the diagram is wrong.

But I do think its at least a slight possibility they included the wrong diagram in for that dvr. Only because a major samsung reseller insists there are two incompabtible rj-45 samsung camera cable pinouts here: (and the one in the diagram is at least compatible with the old regular analog one)

The cables that are compatible with these cameras are the RJ-45 Cat5e T-568B. Confusing? I’m quite sure that it is. Because these cameras are made without a separate power cable, this specific RJ-45 cable is made to carry both video and power currents. This specific type is required to ensure constant power flow to the camera. In cases where different incompatible cables were used, the cameras have malfunctioned beyond repair. The small wiring difference within these different types of RJ-45 cables make a world of a difference. This difference is also evident in our newest HD Camera the SDC-8340BU. Although it uses an RJ-45 cable, the type is different. It is the RJ-45 Cat5e T-568A.

Though this is not totally convincing, since as long as they are termed T-586A on both ends or B on both ends, they are straight thru, right? Maybe they mean one is a crossover...

The main evidence that I see for it being IP outside of the POE and rj-45, is the reviewers claim that the camera "does operate on an IP network".

But let's keep in mind that a DHCP request isn't an IP request, it's a request for an IP, and it occurs at the network layer and therefore could be used without actually using the IP stack, as part of a homegrown protocol (HD-UTP?). Also if the reviewer was using wireshark or equiv., he would would have seen ports that were listening (if there were any), even they weren't "open", or least TCP/IP packets, but he doesn't say he saw anything IP. If it is IP and you hooked it up to a good VMS autodetect program, maybe it would find something...

Does anyone know if the rectangular box in front of the lens is the cut filter? Aren't they usually after the lens?

This reminds me of those RJ11 connected Mace Security cameras that were hot in the trunkslammer game a while back. I forget what they called it, maybe RJ11 technology? It was just a normal analog camera that could run over really lousy Cat3 cable.

Like this Samsung camera, they could be powered in the same UTP bundle, but it wasn't called PoE - it wasn't ethernet. 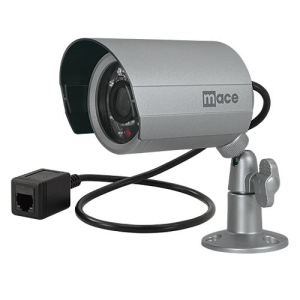 "The camera is essentially same as HD-SDI camera, but we send the HD-SDI signal over UTP instead of coax.

essentially same as HD-SDI, but over UTP?

And with power-up-the-cable to boot!

Todd is going to be pissed.

Samsung Techwin on the other hand doesn't hide the fact that they have cameras using HD-SDI, they just hide the cameras themselves under their Analog products section. Some engineer probably lodged an objection on principle... Maybe they should call them non-networked cameras?

Three 720p videos: one AHD, one TVI, one CVI, ignore the thumbnail and title if possible, and decide which looks the best before checking.

The CVI one doesn't seem to be doing 30fps, does it?

What the details behind these clips are I'm not sure. Maybe some else can find them at mammothtechnologies.com. Be warned, this site is not for the faint-hearted, it must have been modeled to look like an exploding billboard in Times Square...

I am voting 'not enough information' on this comparison.