What Is The "Effective ISO"?

What is the Effevtive ISO? If anyone knows about this, please explain.

There IS a correlation between ISO and other exposure factors that would allow one to provide an answer to this question. Let me see if I can articulate it here...

Film "grain" corresponds to the size and density of the crystals of light-capturing compounds on the film, so it's roughly analogous to the pixels of a sensor - higher-ISO film has larger crystals to gather more light at the expense of "detail", like a sensor having larger pixels at the expense of resolution.

Also as with sensors, there was a wide variation in grain quality depending on the manufacturer, the particular formulation... and the cost. For example, I used to shoot sometimes with Kodak Ektar film, which was their particular line of higher-grade film. For nightclub work, I would use Ektar 1000, which had about the same level of grain (clarity) as most other ISO 400 films, but with one-and-a-third more stops of sensitivity - that is, I could shoot with a significantly faster shutter. I also paid about a 30-40% premium for this film over most standard lines. They also made an ISO 50 version of this film that was so incredibly fine-grained, on a shot of a radio tower silhouetted against the sunrise, I could make out the bolts attaching the guy wires on a 4x6 print, and could see magnified bumps in the paper before I could detect any grain.

Of course, Sunny 16 is just a rule-of-thumb and hardly a basis for scientific measurements, but hopefully you get the idea. With the proper lab equipment, you could measure the output of a sensor while feeding it a carefully controlled amount of light and get a much exact number, although even then, the ISO number of a digital sensor is still somewhat arbitrary, as it will provide an INDICATION of light sensitivity, but not a DEFINITIVE number... and as with film, it's little more than a vague suggestion as to the actual image quality produced. As Brian notes, the sensitivity of the sensor itself doesn't change, so when you "adjust" the ISO on a digital camera, what you're really adjusting is the gain of the sensor, electronically boosting the signal from that 0-gain setting, as John describes.

There is the ISO 12232, which describes ISO sensitivity measurement of digital cameras. No mention of an "effective" ISO there, but could still be what is intended by the customer.

ISO is to photography as AGC is to surveillance cameras. If the camera had 0 gain, it would be the equivalent of the lowest ISO setting on the camera. See our AGC test results.

I suspect this is a somewhat awkward cross reference to photography cameras, and ISO speed vs. gain to project some sort of wide-dynamic range ability. 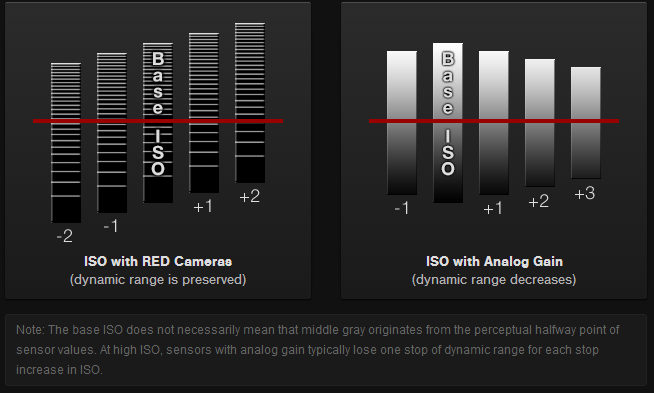 However, ISO speeds are not common with IP surveillance cameras. Factors like f stop and shutter speed are manipulated to influence light exposure, but I cannot recall any that use ISO.