We are going to do a test of VMS mapping feature (i.e., layout cameras on maps, control, select them from it). We are curious what you most like or dislike about them (as well as what questions you have).

Do you never use them? Do you use them but only in certain situations? Is there some type of mapping you have found to be better than others?

John, It would be great if you included Milestone's Camera Navigator, although its not exactly a map, it is configured based on a map, and although I think its cool concept feature, I have not been able to get it to function as its intended. It seams like when I place the cameras on the map the location of the camera hotlink changes on the image, but I cannot get it to correlate exactly to the location on live image, by adjusting its position on the map.

Joe, input. That's certainly a part of mapping / geographical representation. A few VMSes claim to have a feature like this, though the marketing names differ.

Here's an excerpt of Milestone's marketing claim for Camera Navigator:

And from a user manual: 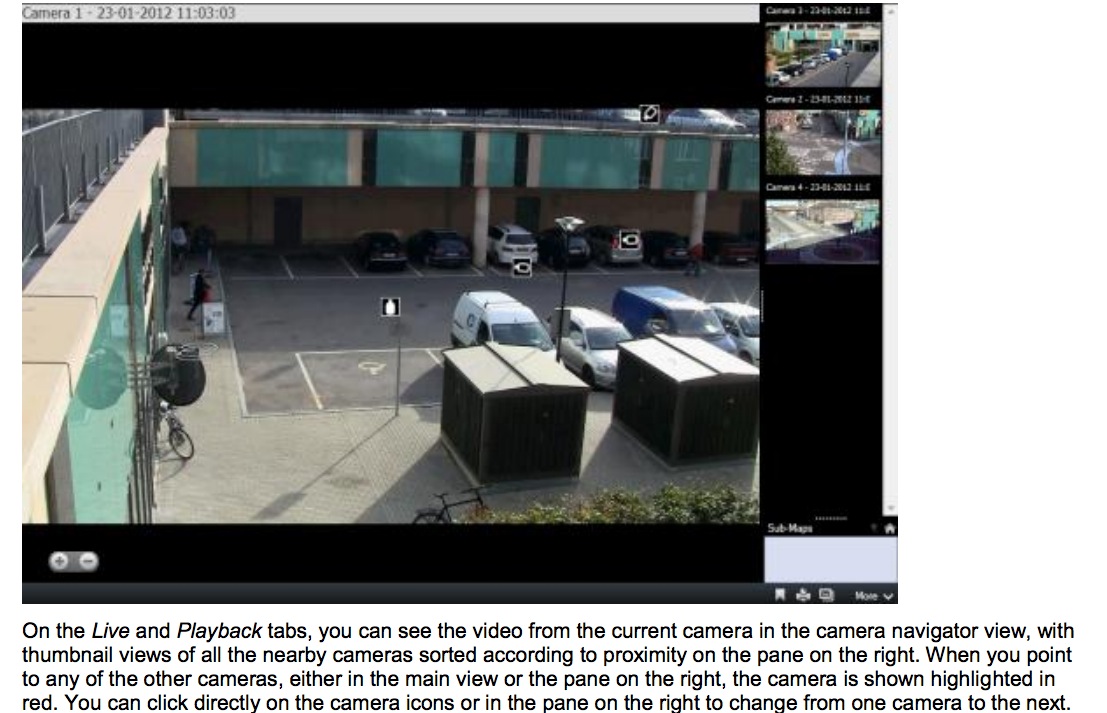 I have only set it up in our demo version, so I haven’t had a customer use it yet, but what I found to not like about it was you have to configure the cameras placement on a map view, there is no way to scale the positioning of where it falls on the image. What would be great is, rather than setting up the nearby cameras from a map view you do by placing the camera on the image, that way the icon falls exactly where you want it.

For instance I would like to see the ability to drag the camera onto the image say, on top of the sheds you see in your posted scene. Rather than have to create a view with enough tiles to see nearby cameras.

This way if I see someone walks into a shed, I just click right on the icon and be taken to that camera inside the shed. A motion indicator would be icing on the cake.

One would think that creating a false map, of incorrectly placed cameras on the map orienting the cameras correctly on the image would fix this, but Milestone is doing something more behind the scenes to have the icon on the image show up, as image placement of the icons change as more cameras are added to the navigator further limiting the ability to trick it.

Thanks for the detailed feedback. We have not used it ourselves, so we will look into this during the test and get input from Milestone about how it can be best used.

When you can put your access controlled doors and cameras both on the same map.

Aside from that I have rarely used camera maps other than in large installations.

We used mapping infrequently. Usually the customer was expeecting far more than the map could do. It would be nice if you could left click on the camera to bring up live video and right click to bring up recorded video. Maybe an option for a thumbnail right next to the camera with a snapshot updated hourly.

Just relaying what my previous customers always asked me :)

We use the mapping feature on our Exacq servers vewry frequently. Clients love the ease of use and realtime display of motion or events then be able to drilll down to the image with one click.

Along what John Groke said, having searchable icons of other security/safety systems on the same map - to allow faster access to the relevant camera in case of an event (such as access control, fire sensors, door sensors, motion sensors, glass break...)

Some of these system could be integrated to the VMS, resulting in automating the popup of the relevant cameras in case of a trigger, but most of them are not (could be, but might get too expensive)

I understand that this sounds like infringing on a basic feature of the PSIM functionality, but it would be far cheaper to have it in the VMS maps.