What Do You Call A Video System?

Since CCTV is all but dead, what is the proper term for a complete video system? VSS - Video Surveillance System? I still get people referring to Digital/IP systems as CCTV. Drives me nuts but I can't seem to find a universal naming convention.

Now, you are opening up a can of worms!

There's no real universal naming convention (as in some accepted standards body as ratified one name or the other).

IPVM tends to use Video Surveillance System, though we do not use the VSS acronym, simply out of fear that people would not recognize what VSS means.

We had a very similar discussion 8 months ago in our (old) LinkedIn group.

I prefer to call it a video surveillance system, yes. I'm also not bothered when people say CCTV, because I know the technology has changed, but we all know what they're talking about.

I try to look at it these days from what the typical end user is looking for, a security camera system. Most people just call them security cameras anyways.

I do use CCTV to explain to people the closed curcuit part when designing thier network cabling setup as to why to keep ip cameras on a seperate network .

As far as the can of worms go, lets call it CCIP system :)

CCTV is the well known term used very loosely from my experience, regardless of if it is for monitoring and/or recording using analog/IP/HD-SDI/whatever cameras. There is no consensus on which one is correct. I have seen video surveillance system (VSS), video management system(VMS), camera management system(CMS), camera recording system(CRS), video information system (VIS), video security system (VSS) and you can add analog and/or IP and/or HDCCTV to these terms.

In a strict sense, IP cameras + NVR is not closed circuit. HDCCTV is still using CCTV, and in a way it makes sense for HDCCTV.

I usually go with what they want to call it and try not to correct it unless it is absolutely misleading.

Ughhh you guys are making me cringe. The words pretentious and high-falutin’ (if that is a word) come to mind. What does it really matter? If I call it CCTV instead of HDCCTV, VSS, VMS, DVR, IP Cams, ACLU, FBI, DHS or any other idiotic acronym does it change what we are talking about? If I call it CCTV will you not understand what I am talking about? Nothing would make me angrier than to be “corrected” on something that needs no correcting. Well, unless you said there was an API or SDK to care of something your software didn’t do…… In that case I would taze you.

Did I mention it is 96 degrees with a high dew point and people are dropping like crazy?

What does it really matter?

Actually it does matter. I'm creating documents and standards for the company I work for. We have CCTV and we have all IP. If someone looks at the documentation and I refer to both as CCTV it will lead to confusion. So to make it clear I was looking for a designation for IP. Had there been something everyone generally agreed on I would have used that, since there isn't I'll use VSS. Was that too much to ask?

I meant to me. What does it really matter to me? Documents and Standards you bet and I am all for it, but I am going to continue to call it CCTV for the foreseeable future. I’ll be damned if I am going to retrain my entire staff to use a new acronym when most of them still call Tyco ADT.

Plus, didn’t I mention I was hot and cranky?

Someone. Vanderklok needs a snowcone!

I wish there was a single certain term that everyone agreed on because it can increase confusion. For instance, even doing an internet search, the term you use significantly impacts the results received, even if the core technology / products are the same.

John, how about analog CCTV vs IP video / IP cameras?

Oh yeah, VSS works for me.

When I discuss a security camera system and draw up sales/marketing documents, I try to be clear with the description I use to differentiate an analog CCTV system from a network camera system by using the term "IP cameras". This makes it clear to the subject/target market the difference between the two. I dont use the word digital as some newer analog cameras have DSP in thier hype.

I dont use VSS as this also does not differentiate between analog and IP. Both are a video surveillance system.

I talk/write about the recorders seperately and later in the discussion because currently you dont need a recorder to have an IP camera system with recording in the camera now.

HDCCTV and HD-SDI systems are a seperate discussion because they are not IP cameras but the recorder is an IP device that can be attached to the network.

An Internet protocol camera, or IP camera, is a type of digital video camera commonly employed for surveillance, and which unlike analog closed circuit television (CCTV) cameras can send and receive data via a computer network and the Internet. Although most cameras that do this are webcams, the term "IP camera" or "netcam" is usually applied only to those used for surveillance.

There are two kinds of IP cameras:
Centralized IP cameras, which require a central Network Video Recorder (NVR) to handle the recording, video and alarm management.
Decentralized IP cameras, which do not require a central Network Video Recorder (NVR), as the cameras have recording functionality built-in and can thus record directly to digital storage media, such as flash drives, hard disk drives or network attached storage.

Our sales staff will typically call it Video Surveilance System, but sometimes you have to refer to it as CCTV due to Bid specification sections, legacy contractors, etc. I can't say it bothers me much, I get much more annoyed when people refer to WiFi as just "wireless" actually...

I think Video Management System was a big naming mistake. From when I first heard it until now, I think of VMS as some way to manage my DVD's and computer videos, not immediately anything related to surveillance. I think Video Surveillance System makes moe sense. The words to me cover what VMS is supposed to mean but speaks more clearly to the "surveillance" aspect than VMS does.

I suppose many 'VMS' vendors imagine themselves as more than surveillance. But yes, VSS instead of VMS would be more appropriate overwhelmingly.

Sorry for adding more fuel to the fire :P

I would just call it an IP surveillance system if its IP and a CCTV system if its analog. If it's both IP and analog I call it a hybrid video system. Am I remiss to think its that cut and dry?

I dunno, I'm with Ross here.... when you say "CCTV", almost everyone equates that to "video surveillance' - only in fora such as this do people waste time deconstructing the term to see if you REALLY mean what you THINK you mean. "Wait, you said CCTV, but you're talking about IP cameras, so which is it?" I mean, really.

If you want to get REALLY pedantic over terms, "CCTV" is incorrect from the very start, since the TV stands for "television"... and if you deconstruct that, you get to the meaning of "tele":

Strictly speaking, CCTV signals, analog or otherwise, aren't travelling very far - maybe up to a couple hundred feet in most cases - while when it comes to TELEVISION, you're usually talking about signals being broadcast over dozens or hundreds of miles.

The whole point is, getting bent over whether IP, SDI and other systems qualify as "closed circuit" is pointless. People know what "CCTV" refers to. You might rile some debates with it, but you're not going to confuse anyone by using that term as a synonym for "video surveillance".

Honestly, the semantics over this one just conjures images of this guy: 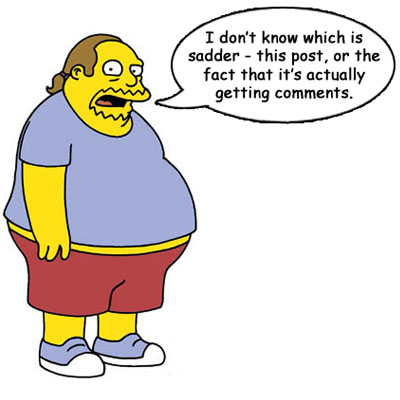 (As an aside, the term that I've seen cause a lot more confusion is "DVR" - many manufacturers and service providers use it to refer to a TiVo-type system, aka the PVR, or Personal Video Recorder... though technically, a PVR *is* a Digital Video Recorder as well.)