The first time I covered the major drone show (AVUSI) back in 2011, it was almost taboo to talk about arming UAVs. I’d ask companies about UAVs that could be weaponized (like the one owned by a sheriffs office in Texas that could be equipped with a grenade launcher) and most people tried to shift the conversation away from that or said something like "we just make them, the end users decide what they use them for."

At this year’s show, it was the complete opposite. I saw at least a half dozen mock-ups of weaponized UAVs showing military and law enforcement applications.

These two are obviously marketed to defense departments with big budgets. A new missile that can be fired from a drone: 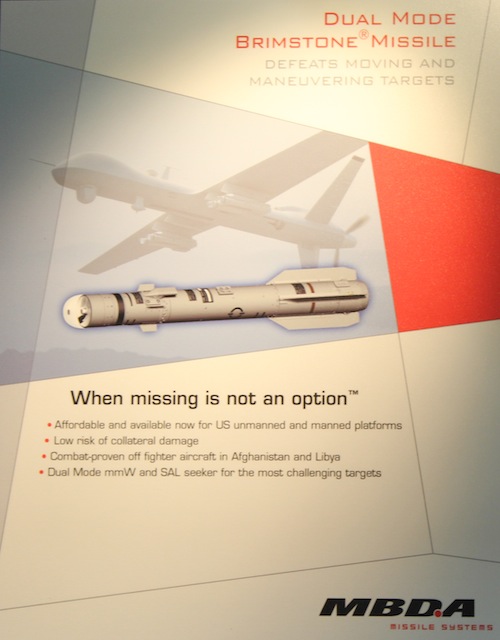 and a drone boat with a mounted rifle: 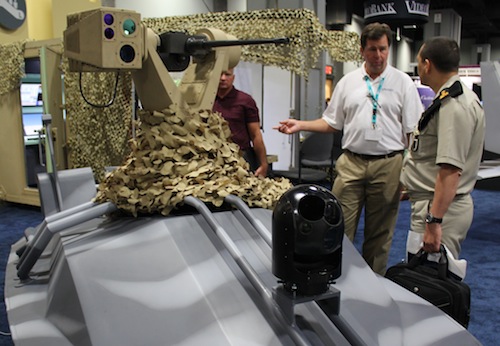 But who's going to be using the smaller ones? Local law enforcement: 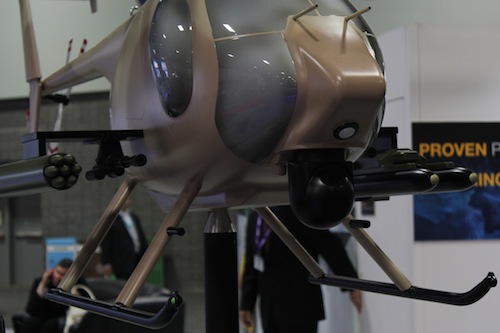 It's strange how the shift from "These will greatly help you with search and rescue and give you better situational awareness" to "look what weapons you can put on here" happened in just two years.

My opinion is that we need to Weaponize drones, but only if we manufacture our own (here in the US).

It is inevitable that technical adversaries will covertly design and build killer robots, treaty or no treaty.

John, those would be a rocket pod (for shooting rockets) and a gatling gun possibly. Not anything police would be using. The UAV there is a marketing model of Boeing's Little Bird helicopter. There is a manned version and an unmanned version. The rep at the booth says they have been marketed to military mostly, but local and federal law enforcement interest is growing and is what is going to fuel demand in the future.

I think the biggest problem will be the "disconnect from reality" that will accompany drone operation. Friendly fire incidents happen often in the military, despite constant training aimed at avoiding them. In Vietnam, I was involved in two (losing side, unfortunately) and both were a result of poor communication but with live people at both ends. Drone operation likely feels like a video game and I assume there would be a subconscious tendency to lose full control without actually having skin in the game.

That is probably the greatest danger. Operating a drone in a live fire situation would likely trigger the same mental and physical responses without the sense of personal danger experienced by real pilots.

Carlton, the small one looks like a toy. Do you know what type of ammo / etc. it is carrying?

Might get hit by a drone while driving to work before getting shot by one.

Carl, do you think maybe special rules of engagement will be designed for if/when they do start arming them?

Not at all amazing. What will be amazing will be the response to lawsuits from innocent bystanders caught up in friendly fire incidents by trigger-happy "shoot first and ask questions later" law enforcement yahoos.