So I had the pleasure of visiting the ISE last week and I was drewling the whole day.
Videowalls! Videowalls everywhere!

I mainly went there cause my knowledge regarding videowalls are limited, as in the past we only ever used single monitors. But with our IP installations becoming bigger and bigger I get more and more request for bigger presentation.

I was quite pleased to see all these products there. I noticed a difference in videowalls made by multiple LCD monitors with slim brezels, gigantic single LCD monitors (105"!), LCD Panel walls or Beamers.
Now personally I don't think using giant LCD Monitors or Beamers would be smart in a control center. Mainly due to a giant LCD is costly to replace, and beamers never give the same brightness a LCD can.

The LCD panel walls were quite intresting to see. They seem to have longer life then monitors, but have less detail close up. I'm at a loss what the main differences between this and Monitor video walls is tho.

What are your personal experiances regarding this ? Have you build videowalls in the past, and ifso, how ?

I have seen it done multiple ways (I have some AV project background). On the high end I was involved in large project where 60 water-cooled rear projection displays made up the video wall along with Crestron touch panels, Extron AV matrix switchers, and numerous architectural interfaces (AV inputs with line drivers) made up a $4 million video wall. On the low end I have personally hung 8 professional grade displays on a wall, used HDMI to single Cat5e transmitters (due to distance), and a pricey workstation. Obviously that was much less expensive but it is not particularly scalable and nowhere near as feature rich.

Many VMS also offer some level of support for a video wall. Milestone has one called SmartWall built in to Xprotect Corporate but it is pretty basic. I know Geovision and Avigilon have something as well but I have not used them.

If you're working on the high end projects... get an AV company involved. There is just too much programming and switching necessary unless you know what you are doing.

On the low end projects just be mindful of EDID and you should be ok. No one likes when the workstation reboots and the entire display wall rearranges itself. Something with better EDID management than Windows should ideally be between whatever is driving the video wall (workstation) and the displays.

Also on the low end, but a very fun idea, is to make use of OPS PCs to embed the workstation directly into the monitors. I've seen it done for digital signage but AFAIK no one has done it on surveillance yet. 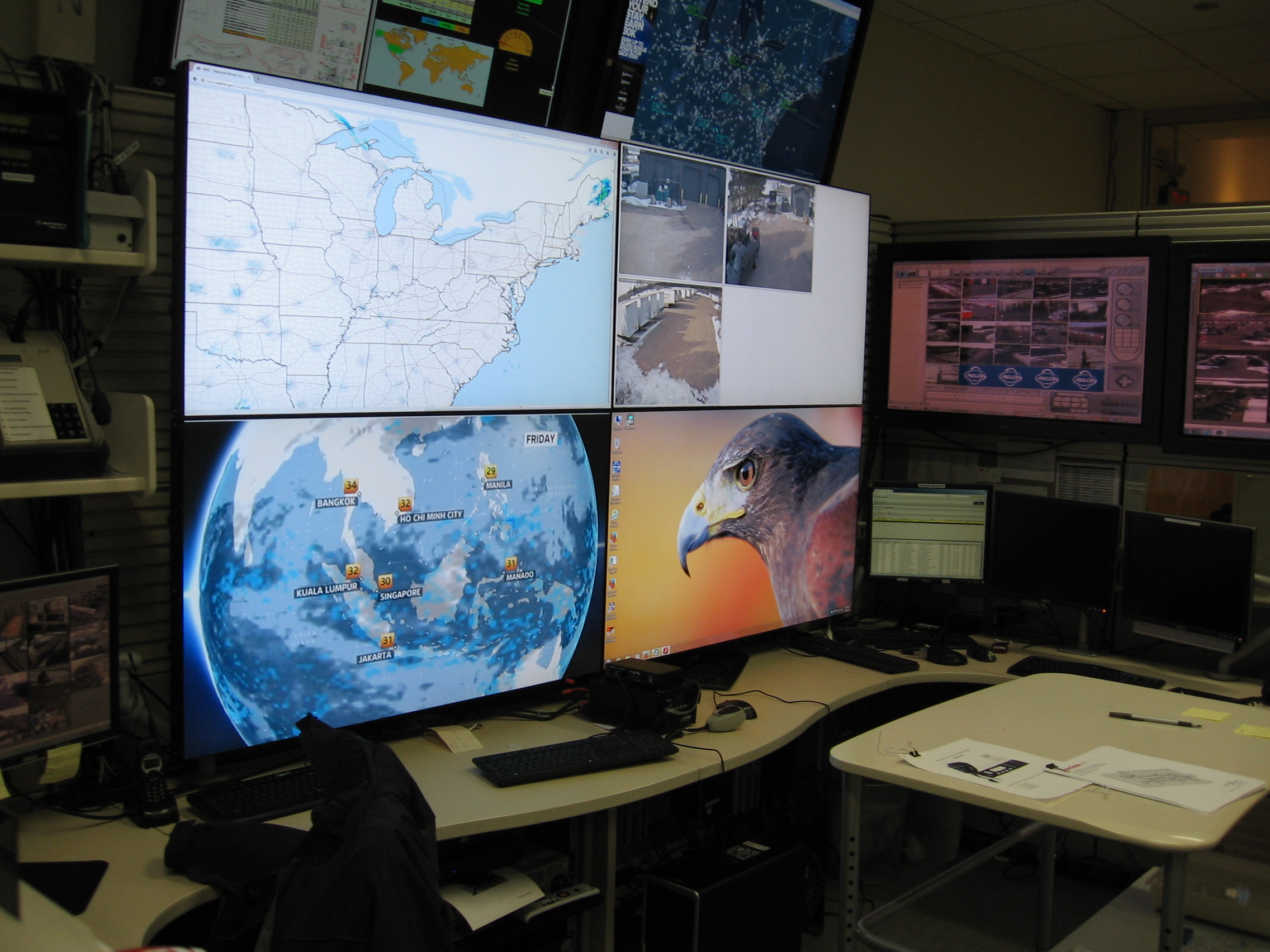 Whoops! Dang that is a big picture.... Sorry about that. We are lucky enough to have tons of engineers who always want the latest greatest computers with fancy video cards. We just wait until they upgrade and snag one of their PC's.

Probably none f the video walls Rogier saw at ISE were sent video from a pc with multiple outputs. Usually they go behind a matrix switchers, a video wall processor, some of them panels have inbuilt software, and so on.

These are NEC monitors with all kinds of software to set it up however we want and that uses a PC as its processor (no need for a seperate dedicated unit). We just found it easier to not use the specialized software and treat them as four seperate computer monitors out of the PC's video cards. If we were to use the the software I would need to connect all the monitors together with RS422 AND DVI cables. So I decided all the cool fancy features were not worth the hassle.

Roger if you want to do it on the cheap just get a few decent video cards and a decent PC and you can accomplish a whole lot.

Actually. They had tons of different ways to show video on the walls. Since I went up to most to ask how they did it.

It was mostly a show where the displays are used for advertisements and such. So asking how they would solve a video solution was quite intresting as well. As having a gigantic videoscreen is nice, but if you only have 1 PC hanging on it you're still limited to the numer of streams it can handle.

TVone had me quite intrigued with their videowall controller.

Panasonic makes a plug in pc that goes inside some of their displays allowing for video monitoring, etc. I personally have used IP Keyboard/Mouse software (Similar to KVM, but just KM). This lets you have multiple PCs/monitors and 1 keyboard and mouse to control. The slot PC also has multiple monitor outputs to drive 2 monitors from 1.

Very clean and elegant solution. It can pass the HDMi video through the slot bus, and also have HDMI/VGA outputs.

One of the reason I'm mostly looking at these videowalls is due to two reasons:

- We need a workable solution for stations who have allot of HD camera's. So far we see two possible solutions. One being a few hefty workstations connected to a videowall controller with a videowall connected to it. Being LCD panel or LCD monitors.
The other one I'm quite considering is either monitors with mini PC's in them, or Intell NUC's attached behind the monitor. WHich handle only the single monitor it's attached to.
Since we run Milestone I can get them to use the Smart Wall function to manage the wall.

- We sometimes get the question if it's not possible to integrate the monitors on the desks since they are getting more and more. Here I really see a good use for a videowall controller. As one can add the video next to the SCADA they use and various other systems. Reducing the number of loose monitors on the desks.

At first I ignored the mini PC's as having way to few CPU power. However, I think that if you have a decent i5, it should be able to handle 9 streams. Which in most cases, is the highest number of streams you need on a single screen. I'm setting up a NUC now to test this theory.

Ok, so to give you some more info with my findings.

I have a NUC laying around here so I did somet tests with my Milestone client to see how it would respond. This particular NUC has an i3-4010U (Duo-core 1,7 Ghz). I could run 9 to 12 different streams before running to its max. Now do note, it was running on 90%-100%. Which isnt what one would want.

However, the NUC's are availible as i5 2,8 Ghz and they announced an i7 serie as well.
So it seems that NUC do seem like a workable solution for single monitors.

Then I did some study on the 'PC in a monitor'-cards. Apparently this is called OPS. Which stands for Open Pluggable Specification. It's a standard created for the Digital Signage market. From what I can gather, they're basicly NUC's in a standard form so you can slam them into a monitor so you have less connections.

It seems to be still quite new and I couldn't find products of them the large computer manufactuers (HP, Intell itself). However, it does seem that allot of monitor manufactuers have either prepped their new monitors to support it, and in some cases even sell their own OPS-modules.
Names I found so far are Panasonic, LG, NEC, AG Neovo.

Imho, I think OPS might have some sure value in the future. It does however seem a bit too new at the moment to start to use it. Since it's created with Digital Signage in mind.

I've used OPS PCs in digital signage. The standard was pretty much created by NEC. NEC makes some OPS PCs but there are third parties making them as well. NEC also makes some projectors with a slot for a OPS PC.

HP, Dell, and Intel are unlikely to create reference designs since the volume they would look for isn't really there. Gigabyte does make one and they're a reputable MoBo manufacturer that bases their boards off Intel reference boards. There are some third parties that make some with a bit more oomf than the ones that NEC makes.

Disclaimer: I do not represent any of these manufacturers and aside from NEC, have not used their product.

Ah good. So at least we have Gigabyte. I was a tad reluctant to try OPS out due to the only suppliers being monitor manufactuers.

I'm going to be seeing if we have any suppliers who have OPS PC's. I definitly think this has merit and I'm going to try one to see how it goes.

Please let us know how it goes. It sounds like you may have an opportunity to use it before I will.

I am curious on how you will use the video wall on Milestone once completed. Will you pop up video based on events that occur at the camera or on an integrator access control system? Or will it be used just for the guards to view whatever groups of cameras they want to see... Or both?

Both actually, altho the first one mostly. In some cases we have a static wall where their most important camera's are to be found. In others we have external contacts. Like for example intercom usage, gates opening or SCADA.

We have Milestone Coorperate. Meaning we got Smart Walls we can use. So far I haven't really made much use of it. Partly due to the fact you can't get rid of the black bars as you can with normal views. But Smart Walls are a perfect solutions if you want to switch to a whole different setup based on extrernal contacts. One factory we're working with now wants to switch between a Quad view and a single view based on how the factory line is running.

But the reason I want to see if I can get these NUC's to run Milestone is fed due to a different need. One large building, part of our large Blast Furnace, has just gone fully automatic. They moved all the controlls to the main controlller room which is in another building. We had to install camera's on ever floor so they could at least see what is happening in their building. So they got about 20 camera's in total there which are presented on 3 42" monitors hanging in the new controller room. However, we are having some glitches with the workstation presenting these. I haven't quite figured out yet what is the cause, but the lack of video is quite dangerous. As a situation can occur in their factory, and if they haven't have sight on it, explosions might happen (coal dust everywhere). So if I can split up these 3 monitors, and give them a station of their own, then if 1 fails, the other 2 will still continue to work. Also, since we also maintain all the equipment, I'm looking at it from a Total Cost of Ownership. And if I have to replace a NUC, I'm cheaper off then an entire workstation. Not to mention that we use those NUC's for other purposes as well, so it's easier to have a few in storage for maintenence.