I was in a newly constructed building today that has a few locations of EAC. Nothing special, basic looking electric strikes. Unsure of brands but I'll be back there next week and will check it out in more depth. I brushed against one of the strikes walking in, and it was very hot. I then checked out a few others out of curiosity, and they were all hot. Pretty much burn level hot. Something definitely isn't right Assuming we're not talking defect, what are some potential causes of this? I've never seen one this hot before. They appear to be working, and they were scheduled to be open (so they were constantly energized) while I was there but still. Shouldn't be that hot. I'm thinking wrong voltage/type something. But I've never experimented much with that to know if the result is very hot strikes or what.

I for one would have preferred you used the buttons...

Maglocks should never, ever be used by anyone serious about access control, except as an absolute last resort.

Strikes are much less likely to require inspection and tying into fire alarm systems for override in emergency.  Strikes are usually much less expensive.  Also, fail secure strikes will function in their security roll long after the battery drains on a maglock power supply during power outages.

In reply to Syd Anthony | 12/27/16 03:19pm
If the Doors need to be kept open for long times ... Wouldn't maglock be the better solution? Does it have to be strikes?
Reply
Agree Disagree Informative Unhelpful Funny Fav
Agree
Disagree
Informative
Unhelpful
Funny

Hmmm Smart Pac seems to be a good product....

Smart Pac all the way. It lowers the voltage draw after the strike opens to reduce the heat. We were called into a school after their integrator installed a hundred of them and one of the kids got burned after leaning on it.

Hopefully you have enough room in the stike pockets to wire it in there or you are going to be doing a lot of cleaning out.

Something else you can do is if the strike is an AC version (i.e. just a coil for the solenoid) and you feed it with DC it will seem to work ok but the AC solenoid is constructed with less coil wire causing a lower resistance and hence more heat then failure. You can minimise this by sticking a diode (like a IN4007) across the coil. make sure the positive from the supply goes to the anode and the negative to the cathode. This also protects it from voltage spikes.

I experienced the same thing with the same strike. Hard to swallow 140* is "normal" not to mention 171* is hot enough to burn skin.

Folger Adams, Adams Rite, and Vonduprin strikes I have used get warm but not like that.

Smartpacs fixed the problem although 19X$38= a big chunk of my profit.

Ah... sounds like everything IS (theoretically) as it should be, then... which makes this a real mystery!

It was the 24VDC tail. Sorry, should have included that.

Negative: It's set for fail secure and is engergized during some hours of the day to allow for free, non-card, access during those times. It fits for this application.

Since those are a dual-voltage strike, I'd look into whether they're wired for 12V operation: 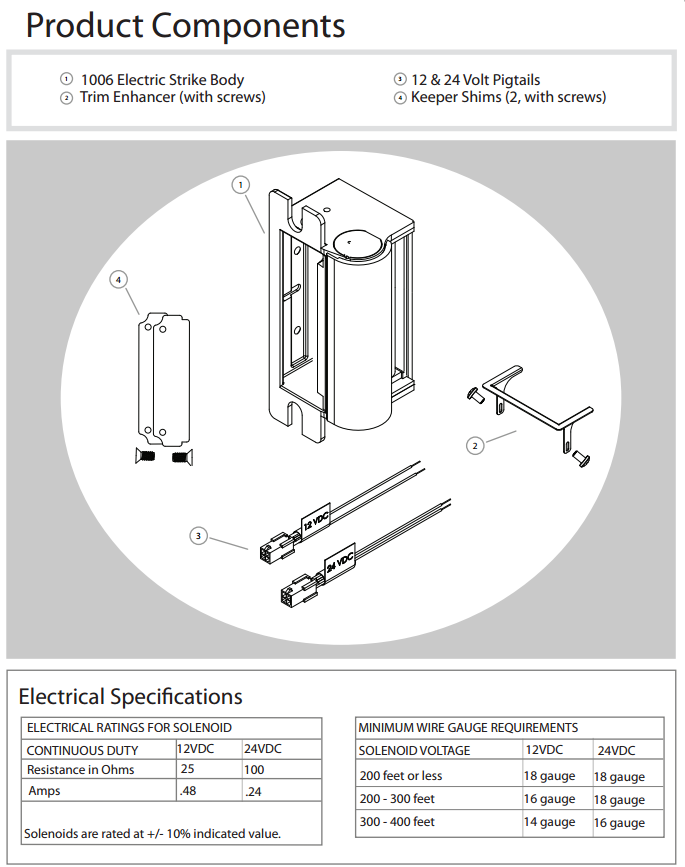 If the 12V tail was used, the strike is presenting only a 25 ohm load and will be sinking nearly a full amp. NOTE: This also explains why the spec Brian listed doesn't appear to follow Ohm's law. As I noted, there IS something else going on: the strike is normally wired differently for 12V vs. 24V operation... and if it's wired for one and supplied with the other, you're going to have issues.

It's also obviously set as fail-safe, and is being kept energized constantly to keep the doors locked... I don't know if this is really desirable, since loss of power to the strike will leave it unlocked. Whether or not the voltage is correct, setting it as fail-secure would at least avoid the overheating, even if it's not a real solution.

I ended up there on Friday and rounded up some additional information. Note: this is not our building so I was trying to maintain a light footprint.

The max temps I measured on multiple units ranged from 165-171F. Admittedly the hottest spot was slightly on the inside and less likely to be hit but that's still too warm IMO. People are going to complain. (Already heard lots of complaints on these and the building isn't even open yet)

Based on the comments here and some reading about that strike, it looks like some Smart Pac III's are in order if they want to keep these strikes and/or continue to use them in this manner. Looks like the Smart Pac is a good idea anyway. Thanks all. Good discussion. 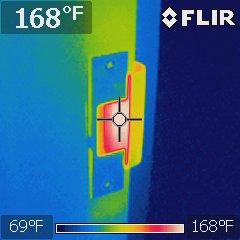 I concur with this post. We always use the SMART PACs as well if the HES strike will be unlocked for hours.

Assuming it is just an issue with the strike under constant power (during the day for example) and all else is correct, I see where that would be good during the day, but then you have the reverse problem at night and it gets hot at night. Plus, you fundamentally change the security situation upon loss of power with that modification.

I've seen this problem before, and it's a simple fix if the hardware allows. Electric strikes are typically used as fail-secure, and stay locked when not energized - they open with a shot of energy from the controller. If the application requires the door to remain unlocked most of the time, then a lock with a fail-safe hardware setting (usually a toggle or turn-screw) will be used. It sounds like the lock in question is a fail-secure device and the panel has been set to constantly power it to stay open. Reversing the lock's setting AND the panel's relay to match (from NC to NO) will fix this without a change in programming. If the lock doesn't have that option, it ought to be replaced so the power draw and heat problem are resolved.

Heat is the killer of all electronics. Another related feature of the smartpak is that it fires the strike at the higher voltage (12 or 24) then runs at a lower 9 or 18 volts after 2 seconds. Also has built in diagnostics.

When we first installed the strikes in the new building at my old job (HES 1006), we noticed they heated up, as well. Some thought to the point of burning. I didn't think they were that bad. We did use the Smart Pac III on some projects, though, and it did help with it. They still get warm, but not hot.

Is it normal for HES electric strikes to heat up during continuous duty?

Yes, all electric strike solenoids will heat up, especially under continuous duty. It is the physics of electricity. Solenoids can reach around 140 degrees F. Note: if the electric strike becomes too hot to touch, it is likely that there is too much voltage getting to the strike and this will cause damage to the solenoid if left unchecked. For continuous duty we recommend using the SMART Pac III

New construction.......energized strikes (open doors and very hot). Bet the strikes are rated for "intermittent duty" and they are being fed continuosly making them run super hot. That is definitely a fire hazard....at the panel! Depending on the relay rating doing the switching, more and more current is being pulled thru them so its just a matter of time before they burn letting out all that pre-packaged blue smoke.

I will do what I can to get more details on the issue and share the findings. It's someone else's system so my poking may be limited but it was a curiosity. Lots of good info here; thank you all. Someone will win a cookie.

No, in this case, flip that:

With a purely resistive load, the relationship between voltage and amperage is directly proportional like Matt suggests. If one increases so does the other proportionately.

However, with an inductive load (even a DC coil, like a solenoid) the relationship is inversely proportional. Increase the voltage and you decrease the amperage.

Ummm... current would be limited by the DC resistance of the coil. Same load at half the voltage would be half the current. I=V/R.

24V constantly energized strikes run with 12V power supply. At half the voltage, you need twice the current to do the same work. Double the current, double the heat.

Correct voltage with very long and/or smaller gauge cable can also do this.

My money (for as much as an over-the-internet diagnosis is worth) is on over-voltage - a strike designed for 12VDC being run on 24VDC, for example. If it's a particularly long run, it's possible it wasn't operating properly at 12VDC due to voltage loss, and someone decided it would be a good idea to give it 24V as a work-around (don't laugh, I've seen it). 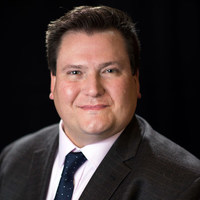 Do you know if they are fail safe or fail secure? Fail safe electric strikes have a constant 24V to the lock to keep it in the secure position. This will cause the locks to run hot. If the electric strikes are hot (burn the skin), then you have a bigger issue.

I also remember one application with a NEW solenoid that ran hot because the power cable was a really long run. I think 75' - 85'.

The strike manufacturer troubleshot this, and explained that due to voltage drop in the long run, the solenoid never 'bottomed out' and floated. Even though the strike released well, it never completed a cycle, and always drew a small amount of power. Over time, this caused the strike to heat up.

The manufacturer recommended using a power supply closer to the device, and the problem went away.

Was it a new or old unit?

Especially when strikes get older, the coil pack in the solenoid becomes less efficient. Over time, the potting inside the solenoids melt and 'burn-in', and usually they draw more amperage to do the same work.

In my experience, when they get hot like that, the 'end is near' and it might have days or weeks left before giving up the ghost.