Neighbor buys new camera system online for house after moving in because old system is 10+ year old Lorex SD Domes (90 degree mount) with no head-end. Chooses the find me a local slammer installer option on website. Guy comes, says basically where do you want them?

Guy finishes, shows neighbor the views on the nvr system and shows him how to use it. Next day neighbor notices old cameras still present and even some of the new cameras mounted right beside old hard crusted over ones.

Slammer says install price is based on new system, and an upgrade actually is more expensive than new. Neighbor says deception.

Should slammer remove old for free, or should owner have to pay more?

Honestly, for residential work aka downtown 'Slammersville, if it wasn't in writing... the owner should have to pay more. The slammer should've accounted for it, and maybe they did, but just didnt want to do the work. That's why they're a slammer.

The homeowner wants an upgrade (to keep the old cameras) or to simply have the old ones pulled down?

Old cameras are presumed dead/non-functional/obsolete. Unless they are dummies of course, then they are probably still working... and remember no head-end was ever found after neighbor moved in. 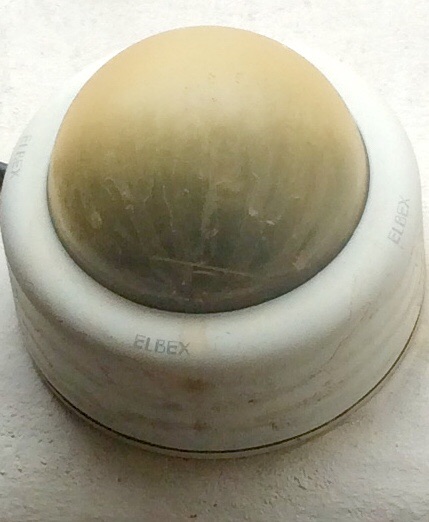 Owner didn't even notice at first because of the way they blend into the side of the house.

Regardless owner will remove since all in all they're just another 'brick' on the wall.

I believe it is on the owner since no call out was specifically made. If you had 5 lights on your house that did not work and had an electrician come and install 5 new lights in different locations but near the old would you expect him to remove them? How would he know that they did not work (although the cameras are pretty obvious)?

Legally I'm sure you are right, but what installer wouldn't even ask? Also two of the new cameras are within 2 feet of the old glazed biospheres.

If mounting a new camera costs X, how much does removing an old one cost, assuming a new one is NOT being mounted at the same location?

So the user did not ask for the cameras to be removed? He just assumed the installer would do it or?

The only issue is that once he removes the old unit who is taking care of patch and paint? Now he has opened up a can of worms if he did it and was never asked. Just playing Devils Advocate here.

No, not explicitly. But when examining the outside and deciding where they should go, the owner said something to the effect of let's keep that view the same, when it came to the two locations that now have an old and a new. He also said he offered them to him, since they were "probably junk", but never actually uttered the required "just toss'em then."

I figure it's like this: Slammer commits to a price thru e-mail, where owner wants a "new" camera system installed, but when there was no actual mention of old camera system. Shows up and doesn't want ask about them because afraid the guy will act like that is part of the deal. Just plays dumb. So then he probably didn't overcharge, but maybe the new cameras could have been mounted over the old, with a possible better cosmetic result.

I'm waiting to hear back what he actually paid for the system and the work...

is anybody familiar with these online Amazon/Home Depot/Lowes select a slammer options?

Problem resolved, neighbor is going to use CAMOVER removal services. ;)

So in essence your neighbor is surprised that he went with a very low-cost solution and he didn't get a high-end outcome?

I'll bet that local guy (and honestly, the whole "trunkslammer" thing seems overly derogatory here, what do you have against a local guy trying to make a living?) had been burned in the past going beyond the scope of work. He takes the old cameras down and inherits and all new problem (rotten wood behind the camera from a bad seal, mismatched paint, whatever).

Really this is just basic contractor-101 stuff. Spell out what you want done when hiring people, don't make any assumptions, if something seems like a gray area then ask for clarification.

If your neighbor had purchased the equipment through a local installer, and had asked for some advice/input, discussion about removing the old units probably would have come up in conversation and he would have gotten what he expected. Of course, he would have also had to pay more money most likely.

Although it's true I asked who should pay in the OP, let me make clear my neighbor does not care about the money. He got sucked in online and hit the button and got an installer. I would bet that he would have just as easily bought from an integrator a system costing 10x, if that had presented itself. He didn't 'spell everything out' because he considered the project as much as we might consider our car being detailed. So, I agree, he really has no one to blame but himself.

He was just shocked that someone would actually do that, even though he would admit they fulfilled the bargain. Maybe like if you went to Starbucks and asked how much for coffee, then ordered and paid, then they said did you want buy a cup to go with that?

So, yes, the neighbor is guilty of not paying the proper attention and getting everything nailed down. But that doesn't mean there can't be a little contributory negligence on the part of the installer too, no?

And I am ready to drop the trunkslammer reference, all that is necessary is for someone to personally state, "Yes, I wouldn't have asked either, and I'm no slammer.'

But no one seems ready to go that far in their defense, will you?

But no one seems ready to go that far in their defense, will you?

I'm not an installer, so hard for me to comment directly.

When I'm selling something, I do generally look for ways to make more money and make the client more happy. Had I been there, I probably would have asked if he wanted me to take down the old cameras, for a fee.

The fact that your installer didn't do that suggests he might not be the best at maximizing the value of a sale, but it doesn't condemn him as a "trunkslammer" (IMO).

Maybe he had a few other larger and more profitable projects to get to, and he took this job as a slight favor to your neighbor so he wouldn't get ripped off by an actual trunk slammer who would do a poor job. Who knows?

You make some good points, I'll admit. :) But what defines a slammer for you?

There is only one thing to do here... we have to consult the AHJ for trunkslamming.

Therefore, I appeal directly to a certain member that we're all familiar with, namely the distinguished and venerable A. Erenthal, writing the majority opinion in the foundational IPVM reference, suggested that

You might be a trunkslammer if you've ever agreed to install equipment a customer picked up from eBay.

Defining the Scope of Work is basic for any purchase agreement. Most RFPs I ever responded to for replacing a surveillance system included a clause specifically mentioning removal of old equipment, ie:

In this case, the end user assumed the installer/tech would do it, but I don't see room to fault the installer for failing to meet an expectation not addressed explicitly up front.

Faced with an old, obviously non-working system, I can't understand why an installer wouldn't take the even easier path of pulling the old cameras, using whatever cable existed to pull new cables through, and mount the new cameras in the same location. This tactic would benefit the installer with an easier project, and less labor time/trouble to finish (assuming these aren't dummy cameras now in place with no cable or pathway).

Benefits to customer would be no removal, no patching/painting of old mounts, and less opportunity for the slammer to make mistakes and cause new damage in making his new pathway.

Ultimately, it looks like the installer did nothing 'wrong', just missed a perfectly good shortcut. Shame on customer for assuming so much ...

Update: neighbor says that it looks like Internet Installer may have attempted rip and replace but then decided not to, based on fresh flat-head screw driver markings under one dome. Maybe he wasn't carrying any security bits?

Also, I imagine that guys taking work like this are used to people trying to squeeze every last minute of their time from them, so there's that.