In the security industry startup discussion, a company introduced itself offering a way to track people on and across cameras via smartphones. I am trying to figure out how well or if this will work.

Well as far as positioning, any phone will be able to find its own approximate position by triangulating cell towers... most smartphones now have GPS receivers, so as long as they have a clear view of the sky, they can generally give a position to within a few meters. And I don't know about Blackberries and iPhones, but Android phones can also use WiFi signals to get a fairly accurate posision (since Google logged all those WiFi points in their StreetView cars).

How would the VMS know then? Well, one presumes this would have to be a custom VMS for just whis purpose, and a VMS designed to communicate with phones could be designed to pull all sorts of data from it besides just the video - location info and live audio included.

As to what to put on the phone, I know of at least one app already that does something similar to all this: there's a security/tracking app called Prey that runs in the background and will allow a user to activate it by "flipping a switch" on their website, or by sending a specific text message to the phone. When active, it will report the phone's location (from whatever internal location services the phone has), turn on the phone's camera so you can see what it sees, and I believe give you two-way audio communication. There are iPhone versions as well as Windows and MacOS versions as well (put it on your laptop, etc.) Prey: Unified Device Management | Reactive Anti-theft | Data Protection

Cost-wise, Prey is free for (I think) up to five devices and a limited number of alerts per month... beyond that you pay a monthly fee for the service, with the various apps themselves being free for whatever supported platforms you have.

(1) is not technically hard (as you explain) but logistically it is because it needs to be connected to the VMS for each phone.

(2) is where I am especially confused. Let's say you tell the VMS "I am a phone X and my coordinates are Y,Z." Almost no VMS knows what to do with that. The VMS can't say, "Oh, you are within the FoV of Camera B, let me pull it up."

Like I say, I would think "the VMS" would have to be something custom and specific to the purpose. I wouldn't see this working with most if any existing VMSes.

Once you have a custom VMS going on, everything becomes relatively elementary. Something that's tracking multiple phones should have no problem handing off to another phone that's using the same system.

Looking at Prey as an example, you wouldn't connect the VMS to the phone - you'd have the phone's app connect back to the VMS.

Just think of it like Avigilon with their JPEG2000 cameras, where those cameras will ONLY work with their own VMS.

Elerts is claiming to do it with 3rd party VMSes, ergo my questions.

You could add this to any VMS as long as the VMS added in functionality to geocode camera FoVs. It's possible though probably tricky to configure accurately in small areas/FoVs.

Ah, well... it could use its own software to receive the streams, transcode it, then re-send it on to the VMS of choice. Then the VMS doesn't have to do any of the thinking; it simply receives and records the video its sent.

Not saying this IS how they do it, just saying, it's really not that complex to do what they seem to be claiming to do.

The most complicated part, really, would simply be convincing people to put the necessary app on their phones.

One of us is confused. Elerts is not saying that they send video from phones to VMSes. Indeed, lots of VMSes do that already and don't need any third party. You load the VMSes app and connect back.

What I believe elerts is offering is tracking / integrating of the phone's location, not its video feeds.

Elerts has enabled our mobile app, that is made available to all empoyees as a free download, to communicate the location of the phone to the VMS. Our technology knows where your cameras are, and what they can see, making it easy for us to tell security officers which camera to look at to find an employee reporting a safety or security issue. With our VMS integration, we automatically 'trigger' that camera on the screen for them.

How does your technology know what area each camera covers? That has to be done manually at each site, no?

How deep is the VMS intregration? What does it display on a VMS? Screenshot please of VMS.

Okay, sounds more like it's designed to work as an internal personnel tracking system, kind of like having employees with RFID tracking fobs, but using their phones instead of fobs. I would think that would definitely take some level of configuring the system so it knows the actual location of the cameras.

Hi again all, The ELERTS software that you download on your smartphone (ELERTS Medic for hospitals or ELERTS campus for corporate or education campuses) enables you to communicate directly with the safety & security offices via a discreet, private method. It offers incident reporting & employee notification capabilities, and even 'virtual escorts' that give users a way to give security the heads up of where they are and where they headed - before an incident occurs. The software's primary function is to improve communications between security and the employees they protect.

Our patent-pending surveillance integration takes it one step further, and delivers security a powerful weapon to convert expensive camera networks from record & rewind devices, into tools capable of putting security instantly on the scene with of an incident. Our software knows where the cameras are & what they can see, and our cloud-based backend analyzes reports and can direct the VMS to focus attention on camera that can view the reporting user's location instantly.

A screenshot of the VMS would look like the customer's existing VMS...we simply focus attention on the event by triggering a dedicated tile...putting security on the scene and more capable of assisting responding officers with additonal information.

I really love all the discussion, thanks for introducing this topic. Brian

Are you able to answer some of John's TECHNICAL questions, Brian, or is pasting marketing copy the extent of your input?

Hi Matt, Thanks. The VMS integration consists of a custom configuration, based obviously on the system type.

It displays the user reporting the incident.

A screenshot wouldn't be necessary, as I mentioned it would like similar to their existing VMS and act similar to an access control trigger.

I think that answers his questions, however I'm always happy to provide as much detail as I am able to share about what we do and how we do it. I'm also happy to set up some time to share more detail to anyone interested.

Great discussion, and very encouraging that we are truly innovating - as evidenced by the line of feedback and questions.

"Our software knows where the cameras are & what they can see, and our cloud-based backend analyzes reports and can direct the VMS to focus attention on camera that can view the reporting user's location instantly."

The only way elerts software can know where the cameras are is if someone manually enters them. I am not sure what technology is patented beyond an interface to input / help input the geocoding.

It triggers a dedicated tile? That's it?

What does it cost?

Brian, let's get into the real details. We are not going to accept your high level marketing without supporting information.

"very encouraging that we are truly innovating - as evidenced by the line of feedback and questions."

It's the opposite - so far it sounds like you are way overselling your capabilities.

Please confirm. There must be some sort of manual input where a tech sets up the geocordinates of each camera for all cameras.

Our patent-pending surveillance integration takes it one step further, and delivers security a powerful weapon to convert expensive camera networks from record & rewind devices, into tools capable of putting security instantly on the scene with of an incident.

I think you just described the plot of the movie TRON.

Hi Jon, i'll like to give my thought on this, as to how it can be done:-

1st - knowing the Phone's location, it had to be a proprietary system that tracks either Wifi or Bluetooth; not cell or GPS triangulation though, as the phone may be travelling in mutli-levels enclosure, cell or GPS trianulgulation only give 2D geo-location not 3D. With Wifi, mostly likely, a fingerprinting methodology will has to be applied within an smart phone App, this will also mean a holistic pre-site survey will have to be done at every building or location that needed to track the phone.With Bluetooth, a presence locate methodology will be most likely candidate, this will require a large numbers of proprietary Bluetooth Detection Base Stations to be installed at the location for tracking, the number of base stations required will depends on the tracking granularity required.

2nd - knowing the camera position, similar to above, the camera location can be indexed on a floor plan or map which matches the geo coding of any above positioning technology. Yes, Jon, you are right to say, a manual input for camera location will be to done in this case.

With the phone's location and camera's location known, its just simple geo code (tile or grid) matching to bring up the right camera when the phone move along the "pre-configured tracked space"

If i were to do this, my choice will be Wifi, as it requires no additional hardware on site (provided the site already has abundance of "free" wifi signals), but will require a certain level of technical competency in wireless fingerprinting know-how though.

Like to know if anyone here has any other thought on this? 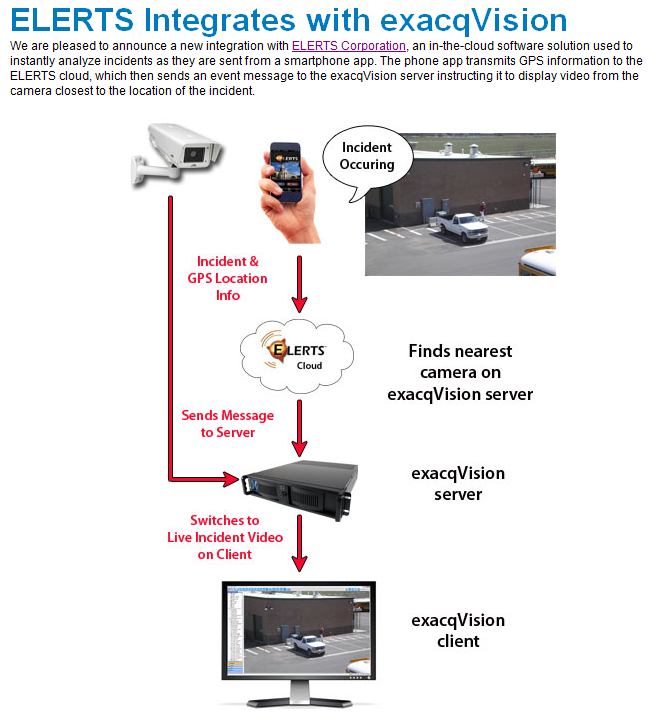