TOPS DVR - Anyone Familiar With These?

A new client is currently using 10 TOPS 8916 DVRs to monitor about 200 analog cameras from their campus' main control room. System works okay and wants to add 20 more cameras plus possibly relocate the existing DVRs to another building. Don't know the age of the DVRs. Client wants my 'opinion' of their existing TOPS DVR system and offer possible reasons to replace the entire system with a more current CCTV solution. TOPS website.

Is anyone familiar with TOPS DVRs? I've never heard of them before.

Never head of them before but their website does not inspire confidence (very dated). On their about page, they say they are a systems integrator too, which is weird.

Hopefully someone knows more about their particulars.

Their client interface looks very familiar but I can't place it. 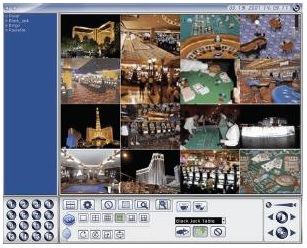 They list a bunch of partners. I'm guessing they're just private labeling or reselling one of those. Or else they're putting capture cards into their own machines.

There is no need for the video cassette recorder unless you wish to store video on cassette for your own reasons.

TOPS DVRs have some sort of control on the monitor that operates like a joystick and by clicking the mouse over the appropriate function the camera responds.

I fully expected this to be just another abandoned ghost site, semi-functioning but dead. So I called the Tech Support number, but then was startled at the sound of a human, and hung up... Maybe it was voice mail... As for:

You can record on the VCR as well the DVR at the same time.

My comeback suggestion to TOPS? ax the VCR and be the first to announce driver support for Sony's 185 TB tape drive..

Thanks John. I thought them being an integrator also was a bit strange too.

Thank you Rukmini. I tried to call also but only got voicemail at tech support and accounting. Both had the same male voice and generic message, "I'm currently unable to take your call..." It was 5:15PM when I called so maybe they went home? I'll try again tomorrow just to see if they're still in business. My client isn't recording to VCRs but to the hard drives in the DVRs. Certainly I want them on a more current VMS platform. If TOPS is no longer in business, it will be an easy argument to move the client onto newer technology.