Industrial Thermal Camera On My VMS

I was wondering if any of you have any experiance with getting a Thermal camera to work on your VMS.

I've tried to get a FLIR A310 to work on our Milestone system using RTSP, but I couldn't quite get it to work.
So I was wondering, have any of you happen to stumble upon a case where they wanted industrial thermal camera's to work on their VMS system ?

And if so, what brands ?

I believe we can help you with that. Let me check your email to follow up.

Thank you. Please do.

Thanks for sharing. That's a cool application!

Just to add some more info on why I'm actually looking for a thermal camera. We're doing a project now to reduce the workforce by adding about 55 camera's all over our terrain to check for leakages from pipes and other things. In that project we also have 3 torches which require a thermal camera to check if it's actually burning.
Due to the gas being burned so well, the flame is blue and in daylight its nearly impossible to see with a normal camera, hence the thermal one. And on top of that, the camera needs to give off an alarm once it sees the flame, so that the SCADA systems can record that the flame is actively burning, and that they aren't pumping gas into the air (although the falling seagulls might be a good indication of it as well).

Here's a photo of one of them torches. 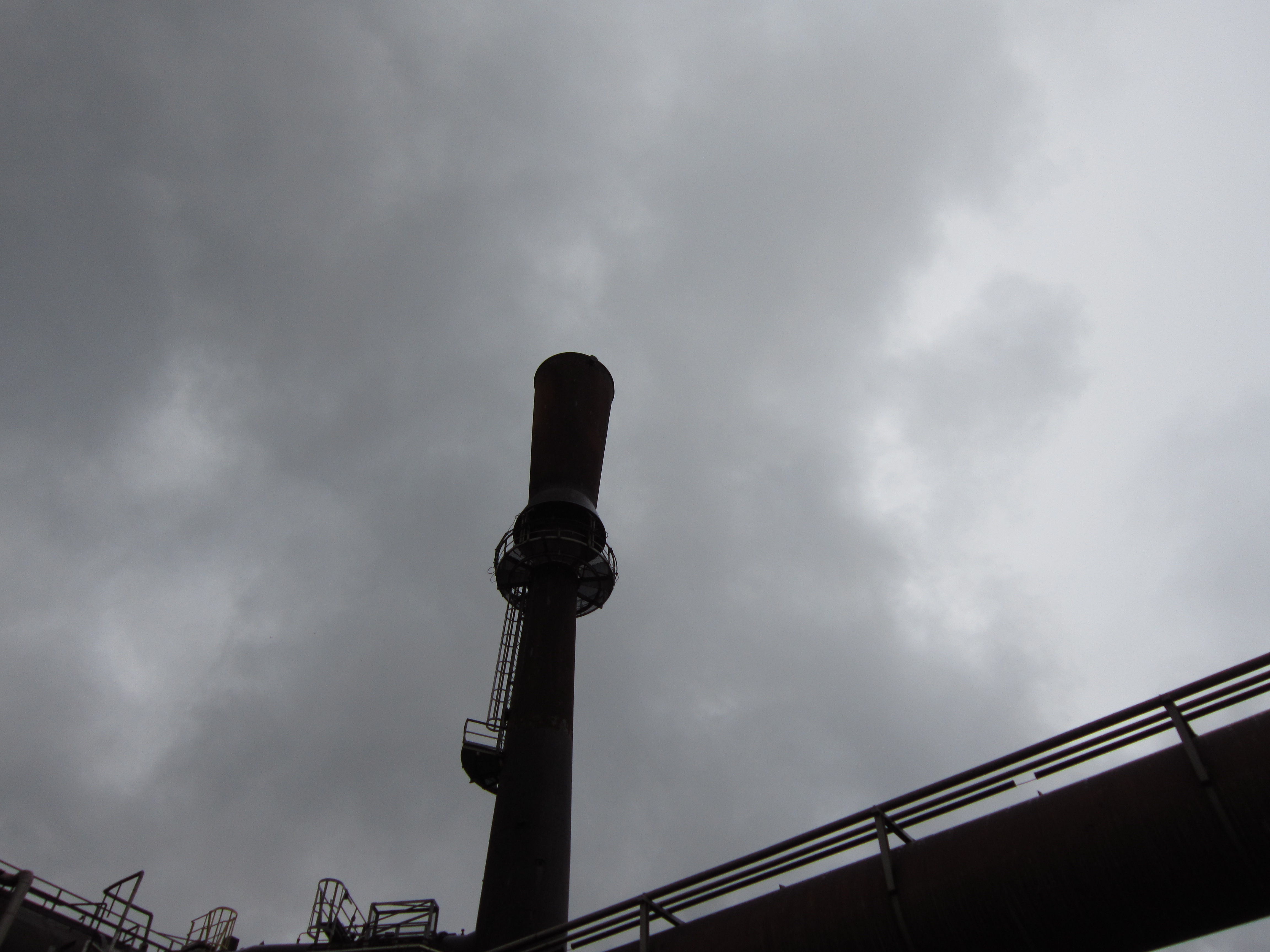 That's one impressive camera! It's good to see that the Industrial side of CCTV get's some attentions every now and then.
I'll contact you trough email for more details.

That's good to hear that it can work.

I had a loan to test with. I can't say what firmware version it was running and updating was something I thought of, but didn't want to do due to it being a loan.

What driver do you use to make it work ? The RTSP one or are you using ONVIF ?
And if you do use ONVIF, are you able to recieve the alarms as well ?

Reply Edit
Delete
Create Topic
Ban post
02/10/14 06:40am
Hi Luis We currently don't have any plans in releasing VGA version but if there is market demand we will definitely look into it. Please contact me by my email and we can discuss more in detail. Thanks! Alan
Reply

Alan, when will you release a VGA version?

I hope you don't mind me telling Rogier about our thermography solution from Pelco with Milestone Integration.

I am the thermography engineering lead from Pelco. I was very excited to see your post because we have just launched our thermography camera products that can read temperature as accurate as FLIR's A310. In addition to our temperature accuracy, we offer several key benefits, number 1 is integration of RTSP steam with temperature overlay, alarm and data trending through a new Milestone plug-in that was released specifically for Pelco thermography cameras integration. We use a separate temperature data stream that goes through the milestone plug in to allow for storing and displaying temperature information without corrupting the video by embedding the information. This allows us to treat the temperature data separately in Milestone so temperature information can be turned on or off in both liveview and recorded stream. The temperature alarms are also stored in alarm manager and can be retrieved the same way as from a security camera alarms. It is a fully integrated solution in Milestone. In addition, our thermography camera is completely IP which means you can configure the camera and read temperature data without additional software installation. It can be done by any web browser. Also, we have developed an IP weather station as an accessary that can communicate to our camera to update ambient temperature, atmospheric pressure, humidity and rain in order to maintain temperature accuracy automatically in any ambient conditions.

I am just on my way back from the Netherlands visiting some very happy customers with our thermography camera solution. The model numbers of our thermography camera are TM314, TM335, TM350. It is 384x288 resolution with 14mm, 35mm and 50mm respectively. In the near future, we will offer the PanTilt version that can have monitoring zones following different preset positions.

Here is a link to the training video that I recorded. Pelco Thermography Camera Demo Video

Here are the latest spec sheet we have published. Pelco Thermography Camera User Manual and Spec

Here is a screen shot of the integration with Milestone 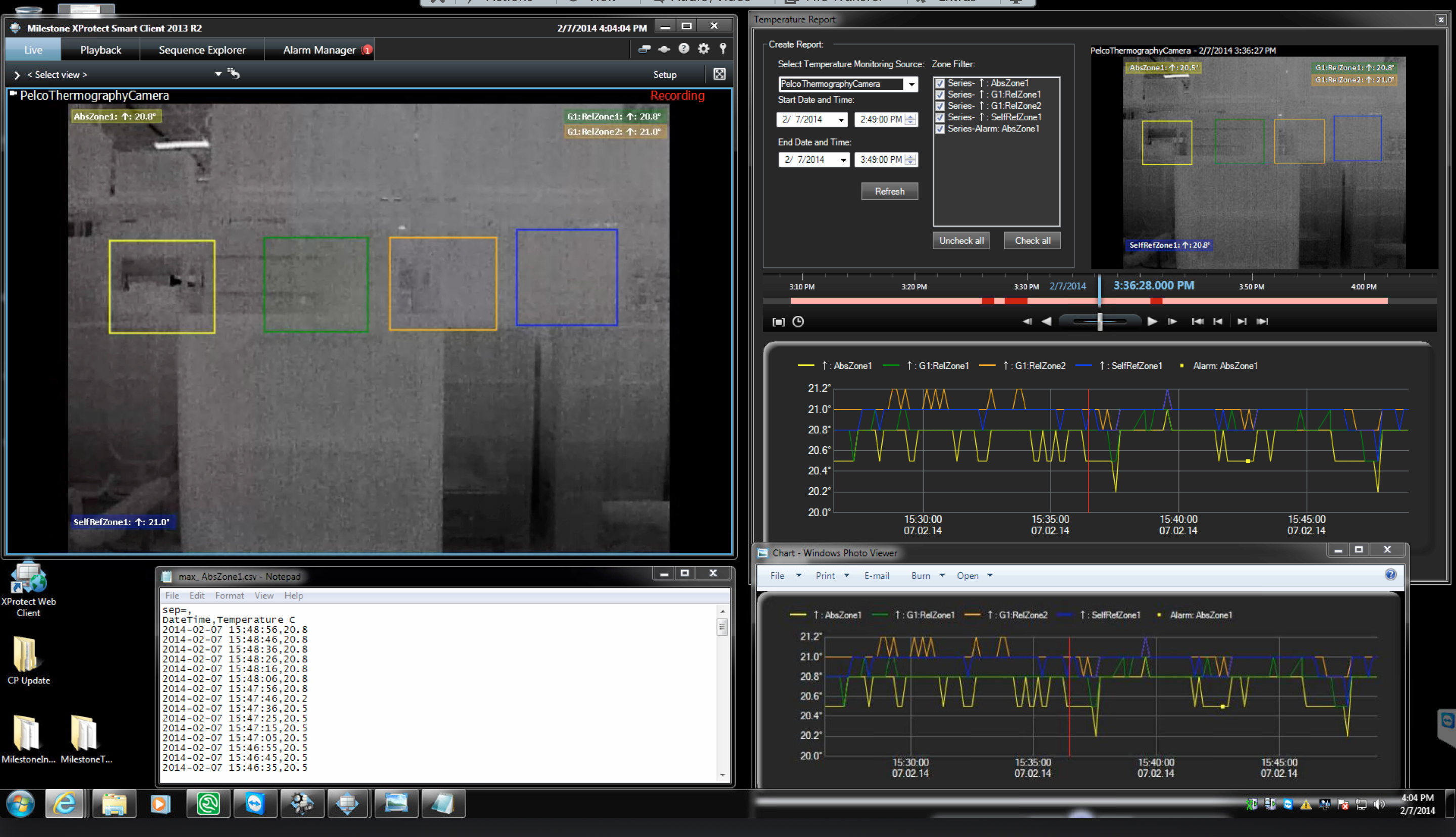 The product spec is not on our website (www.pelco.com) yet. This is currently a SMR product but we are ready to take order and have already shipped cameras to our customers.

We have hundreds of the A310 camera's working with Milestone systems. 1. Are you using the most current firmware on the A310? 2. What version of Milestone are you running? There should be no issues though.

I have 8 DRS cameras working with Avigilon

no problem at all

Hey Rogier, I've never connected the A series to any VMSs, but it's listed as ONVIF compatible on the Milestone supported devices page. That may require a firmware update, though (they list 1.4.1). I remember having to do that with the F series cameras I dealt with awhile back.

The F and FC series connected to VMSs just fine, but they were security centric products instead of more industrial-focused like the A series.

The only case I've ever run into with entities wanting to view existing industrial thermal cameras, it was FLIR, so I can't help you much there.

We've tested and I know of installs with DRS cameras on Geutebruck systems and they work fine. I tetsed PTZ control on one of their PTZ cameras, though it was a little laggy. That was with their first gen PTZ, though, so improvements may have been made since.