[Note: this analysis may not be of interest to our regular security/surveillance readers and while we regularly analyze tech company financials, this is the first analyzing a media company's ones. I found SupChina's fundraising interesting so I wanted to document my initial thoughts.]

For those not familiar, SupChina has various articles and podcasts on China. My perception is they are more positive on the PRC / CCP than Western media generally. I find their content interesting and do follow it.

While the investinsupchina.com webpage has high-level details, I could not find lower-level financial details but these are available via the SEC, as itemized below:

Tech companies these days are raising money at all sorts of eye popping valuation ratios. That noted, I was a bit surprised that SupChina was raising at $45 million (to be clear, they may very well get it as lots of people interested in the PRC have lots of money, and investing in a news organization may be a good investment even if indirectly). The deck notes their goals with the funding:

Last year's revenue was just a half million, from the offering memo:

Most of their revenue has come from their events:

COVID, notwithstanding, events can be big business.

SupChina says they are on pace for just under $1 million this year:

If they do hit that their revenue would be up 70% year over year.

I've asked SupChina for clarification but reading it again a "2021 run-rate" more likely implies ending the year at ~$75K per month revenue, which would still imply notable growth but not 70% YoY.

They are investing / spending to get there. Not counting this year, the company has burned through more than $7 million:

The Company has incurred significant operating losses since inception. As of December 31, 2020 the company had a working capital deficit of $7,206,611 and negative shareholders’ equity of $7,200,611.

Operating expenses were ~$2 million each for the last 2 years. Their burn rate is ~$1.5 million per year, with the company noting:

A particularly interesting slide is how they assess their competitors, copied from their deck: 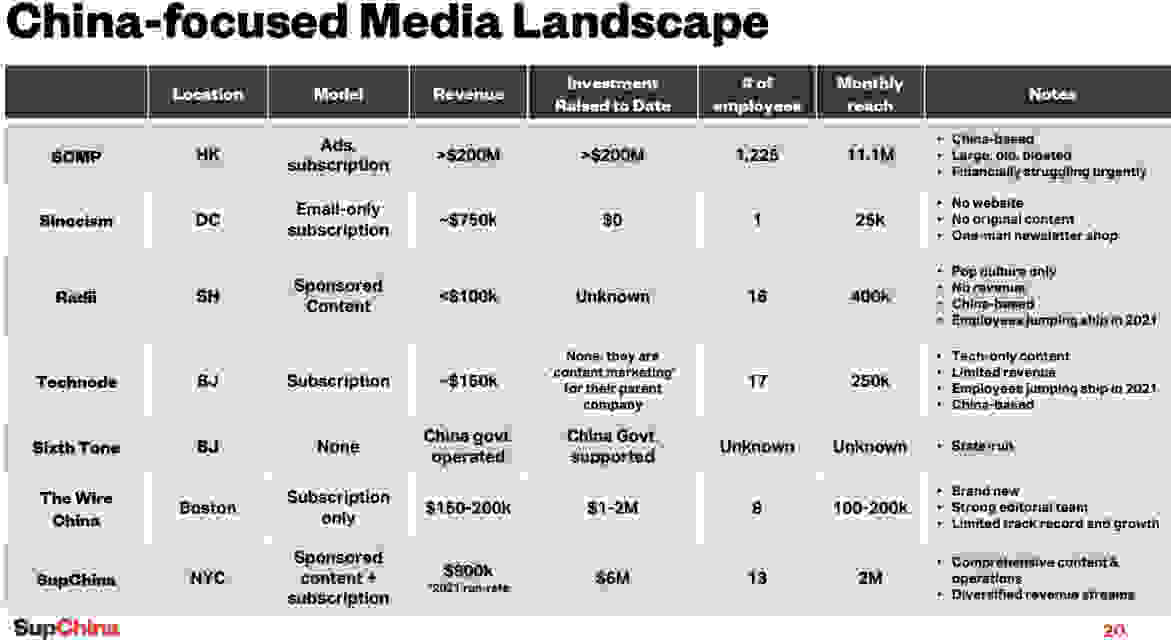 We do not know enough of China publications to assess their competitive landscape though I do subscribe to Sinocism and The Wire China.

It does seem that SupChina has far greater ambitions than most other publications, with a corresponding burn rate to match.

Interest in understanding the PRC is certainly growing so that to end, they have a growth market. How big they can get is unclear. One structural issue will be how satisfied most readers will be with incumbent media publications with China teams, e.g. NY Times, Economist, BCC, WSJ, etc. relative to specialists. The potential to go deeper is clearly there for specialists but how many will pay for that, especially relative to the burn rate of SupChina is unclear.

If they raise a few million / up to $5 million, that will allow SupChina to continue to become bigger than most of their competitors. And if demand from investors is there, they may run new rounds. This gives them the possibility of getting even bigger than their rivals. That scale could be an important differentiator as they compete for subscribers and event attendees.

Raising $5 million at a $45 million valuation means minimal dilution to the founders though it makes it harder to see returns unless SupChina can grow a lot more for many years to come.