How To - Surveillance In A Library

The problem is there are multiple halls (some with separate entries) each with multiple aisles (with limited illumination) created by shelves full of books and other printed matter. Some of the matter is quite old and may be said to be priceless. Fixing a camera to monitor each and every aisle may not be feasible. Some of the shelves go all the way to the ceiling while others are only about 7 ft. high.

Scholars are given access to the books etc. and sometimes it is later found that certain pages have been torn out, resulting in greatly diminishing the value of the book/document.

Since scholars are of all kinds, some of them from the topmost echelons of academia/society/politics it is not possible for the library to enforce any kind of a regular pat-down/search system.

I would like to invite suggestions from members who may have worked on similar projects or who may like to offer their thoughts on how to best go about tackling this.

Ideally, the suggested system should act as a strong deterrent since a missing/damaged page (even if recovered later) greatly reduces the value of the original document.

The budget has not yet been decided but is likely to be limited since the library like most, runs on a limited grant.

The immediate thing that comes to mind to me is a checkout system, i.e., non staff are not allowed to go into the stacks. They request books of interest, staff retrives and it it assigned out to them. When they return, staff reviews and if the books have any problems, it is the responsibility of the person who checked it out.

The shelves make surveillance incredibly difficult, short of dedicating a camera to every aisle, which as you allude to, is likely cost prohibitive.

I am thinking along the lines of how retail manages shop lifting. What I learned from the report posted a couple of months ago is that store detectives when they saw suspicious behavior signaled to security to watch what they are doing without drawing attention to themselves. In a library, floor staff could serve the role of "library detectives" but who is manning the cameras? Perhaps a dedicated station in the library office could serve that role... Suggest you read the retail report, maybe some ideas might come from that.

Robert, I agree that retail store layouts share significant layout similarities. I think the challenge will be for any given aisle in retail, there's lots of traffic and frequent issues. By contrast, with a library, many aisles may only be visited a few time a day and the number of issues per aisle is likely to be low over any given week or month.

Since this is a research library and not a school or college library, traffic levels per aisle are fairly low, to the extent that some aisles are not visited by any scholar for weeks.

Exercising the option of not allowing scholars to directly see the books in the shelves is not acceptable since the process of indexing the books on the shelves and digitizing that index and making it available on conveniently dispersed terminals is still in its early stages and proceeding slowly on account of shortage of staff.

The similarities with retail surveillance are strong but limited. They would be more applicable to school and college libraries where multiple copies of text books may form a significant part of the total holding. In both those cases, it would be relatively easy to come up with an ROI estimation. In this case, since some of the material is priceless, it is very difficult to come up with such figures and apply for a grant from a donor on that basis.

Suppose some benefactor funded installation of a camera at each end of every aisle. How would staff detect attempted book thefts or page removals? The monitoring challenge seems very substantial. If deterrent is the plan, well, a red flashing LED has been said to have some effect...

Given recent Surveillance End Users Getting Sued, you might need library lawyers to confirm no prior art to analytic page removal video primitives or remote page removal monitoring.

In reply to Horace Lasell | 10/21/13 05:04am
While a flashing LED may have some deterrent value, it would perhaps lose this value over a period of time. I wonder if anyone has used strategically placed mirrors to bring down the camera count and still act as a strong deterrent. If so what has been the experience. What are the pros and cons of using them.

NOTICE: This comment has been moved to its own discussion: Place Mirrors To Reduce Camera Count?

You could hire Det. Bookman... but make sure you have some instant coffee on hand.

Seems to me that this would be a good scenario for 360 degree fisheye cameras mounted in the center of the aisles. This would allow you to see down multiple rows of shelves with one camera. Since quality of image wouldn't appear to me to make much difference in this application because you're looking for an "act" and it would be easy to know who the perpetrator was. May need to look at rearranging aisles as well....

My visual of research libraries is that the shelves go up nearly to the ceiling itself, blocking the view of any camera trying to see across multiple rows. Something like this: 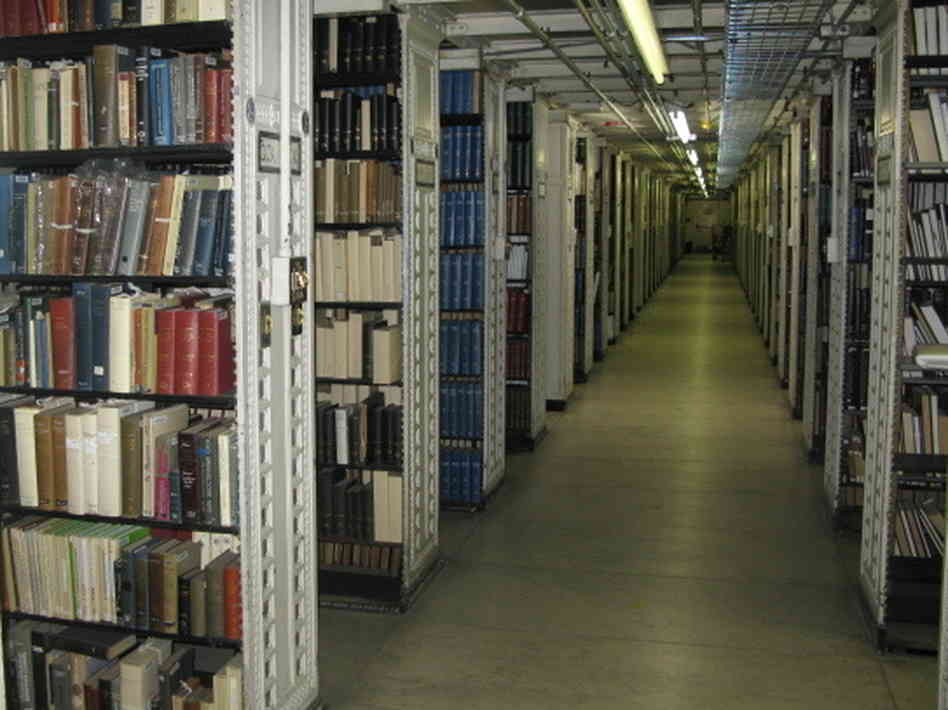 If that library is laid out anything like this, I do not think any camera could see across multiple aisles.

if this IS the scenario then cameras are not the option and procedures for access need to be looked at like your first response to the query.

The other issue I see here with putting cameras on every aisle is that there are still other places where a page could be removed - someone could take a book to a study carrel (holy smokes, I don't think I've actually used that term since high school) and pull out the page while reading it, slipping it under a coat or into a binder or notebook in relative privacy (unless you want to litter every corner of the library with cameras). Cameras watching the shelves and rows will let you track (to some degree) who takes a book out and when, but will be little use in proving who actually removed a page, especially if several people use the book before someone notices it missing.

Consider, too, that unless you have really good resolution and lighting, it may be impossible to tell WHAT book someone takes out from the middle of an aisle, especially if a lot of them look similar; someone accused could claim that they didn't take out that specific book, but one adjacent to it.

I agree, the best bet would be to have a strict checkout system - to expand the retail analogy, think of it more like a pharmacy: most items are out on open shelves, with the few "controlled substances" being available only over-the-counter from the pharmacist. If resources for indexing are tight, the practice could be limited to the books considered particularly valuable, rare, and/or susceptible to page theft. Since traffic for those books tends to be low, until the indexing is improved, it may even work to have a staffer accompany the borrower to find the book he/she wants.

They could also adopt something of a "safe deposit box" concept where certain books are under a checkout procedure, and then can only be taken to a certain open area with a couple of covering cameras, that offer little privacy for page-ripping.

Honestly, I think a combination of control measures would be FAR more effective than a bunch of cameras in reducing the actual theft. OP notes that even if a page is recovered, the value of a book is substantially reduced, and so the "ounce of prevention" theory really applies.

While placing a camera in every aisle might not be cost effective or feasible, perhaps placing a mirrored dome in each aisle would be.

You're going for the deterrent effect of having cameras. Some of the domes could have cameras; others would not. Or, you could move the cameras from time to time.

This option, cameras at the point in ingress/egress, and a few signs might have the desired effect without an insurmountable expense.

That said, all things considered, giving the logistical challenges, it could be a useful deterrent at a low cost.

Perhaps another way to look at it is you're going to implement cameras in phases. But the first phase would include the domes for later phase installations :)O

At our University, we had a significant theft problem at the library. Mostly, the thefts involved small electronics (smartphones and netbooks, etc.) that students left at their desk to "save" their study space when they used the bathroom or took a quick break. By adding two fixed cameras one focused on the entrance and one focused upon the exit, we have essentially eliminated the theft problem. The cameras are prominently displayed and we supplement them with signage to the effect of "...video surveillance in effect 24/7..." The final component was a 32" monitor that displays the camera view to everyone that enters the library. I feel that between the new cameras and the monitor, we have effectively cut crime at our location significantly. The cameras are also supplemented by a student-aide "checker" who does a cursory check of all back-packs of anyone exiting the library.

I am a little surprised that they would use their smartphone and netbooks to save their study spaces. Seems to be common sense not to leave expensive electronics unattended in public.

Btw, how much of the value do you think comes from the checker vs the cameras?

I think that most of the hardended criminals know to secret the stolen goods in their pants. They realize a student aide "checker" won't search them. Now, common sense is another thing...the students unfortunately, think the library is their dorm room or their house and leave a $500 laptop on a desk like it is a pencil. The cameras were the real reason thefts have declined and I have to assume that the word is out on the street that our library is no longer an easy target.

Attached sign posted near main lobby and prominently throughout the 6 story building.