How do you deal with a situation like this?

Customer wants an overview along the front of their building.

Between the canopies and the sconses, it is hard to get a reasonable shot. 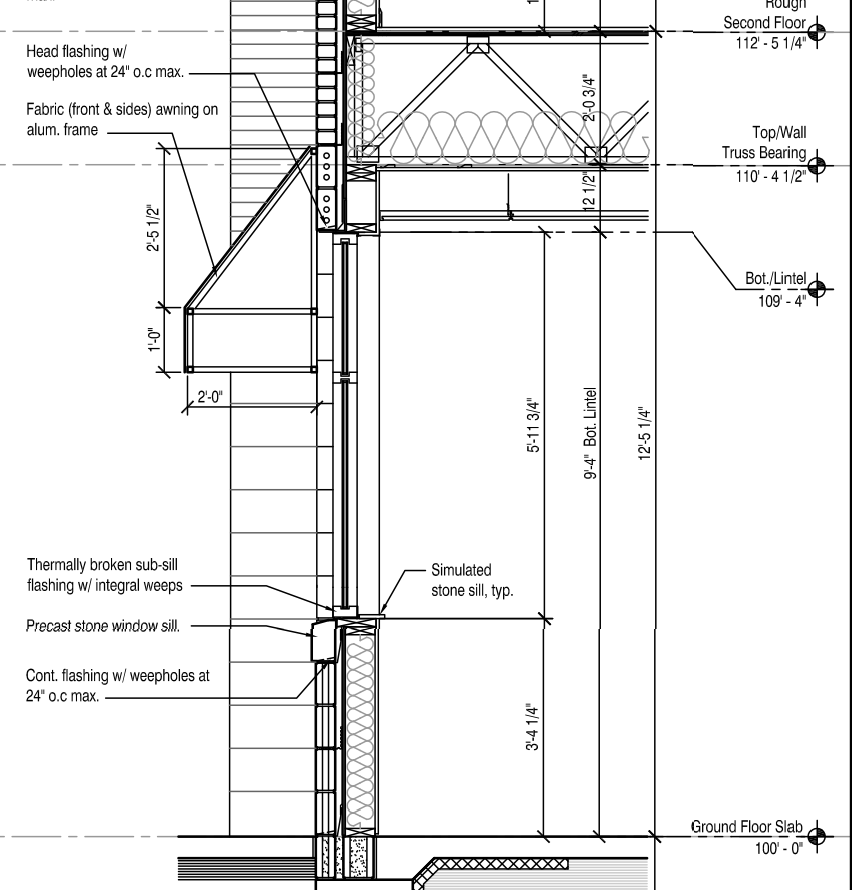 Can you mount a camera adjacent to the front of the building, across the street?

Maybe a gooseneck that extends further than 2' from the wall? (Yikes)

Series of domes hung on the alcoves (ie: the abutments measuring 17'-4") that shoot in opposition to each other, with cameras mounted at the door frames?

That's a tricky install. It would take a bunch of cameras regardless, but even more with the awnings and sconses.

+1 for the building across the street :)

Could you slip a wire out just below the truss, into the canopy, and hang cameras on the outer edge of the canopy itself? You'll probably still have blind spots in parts of the alcoves, but that would give you more coverage than something right on the wall.

Just brainstorming here, but getting back a ways from the storefront seems like the goal. The building across the street does seems ideal. Maybe you can make some sort of deal, you let him install his cameras on your property to look at theirs, and vise-versa. Are you allowed to put up a pole/post along the sidewalk? I'm always unclear who "owns" the sidewalk. A lower mounting along the surface of the building would probably do, but if the sidewalk is busy, a tall guy could block the entire scene, also opens up opportunity for vandalism. If you choose a multi camera solution you might be interested in some sort of image stitching technology such as products offered from DVTel. DVTel's SceneTracker IP Camera Stitching Solution - YouTube

Across the street is a no go.

We are leaning towards a couple cameras mounted low using long lenses. I'm looking at the Bosch Starlight dome w/ the 24mm lens. It is not ideal (vandalism is a real concern), but "a bunch" of cameras don't fit the budget.

Matt's idea of using the canopy as a mounting point has me intriqued. It's a fabric canopy over aluminum frame, so I need to find out how substantial that frame is. Many of the ones I've seen are pretty flimsy.

Something a little more lightwight and inconspicuous may be in order... we recently used a dozen of the Axis P1214-E cameras in giant patio umbrellas for a restaurant, they work quite nicely. Axis' "corridor mode" feature was great for a section that's long and narrow.

How far from the front of the building does the business property extend to the street or sidewalk? Is there a landscape strip between the sidewalk and street? I have seen some camera installs within landscape lighting fixtures that are pretty creative and might work a bit better than attached to the building or the awnings which might pick up a good bit of wind vibration.

Other than the doorways, what purpose does covering the remainder of the building serve if vandalism is not much of a worry and an alarm system for the numerous windows would be a greater deterrence to window entry than cameras.