After a local white supremacist group were arrested for doing armed patrols of the city, the city councilman who lives across the street from the group's leader installed a surveillance camera on the front of his house. But once the camera went up, the group leader's girlfriend got a temporary restraining order against the councilman saying he was being a "voyeur" and a judge signed the restraining order.

In contrast to the discussion we had last week, where it was the police who set up a camera across the street from a suspected trafficker, this time it was a city councilman who set up a camera facing the house of his gun-toting, white supremacist neighbors.

This is a photo from a local website of the group on patrol. The woman in the back is who took out the restraining order against the councilman. This is the video from her camera. 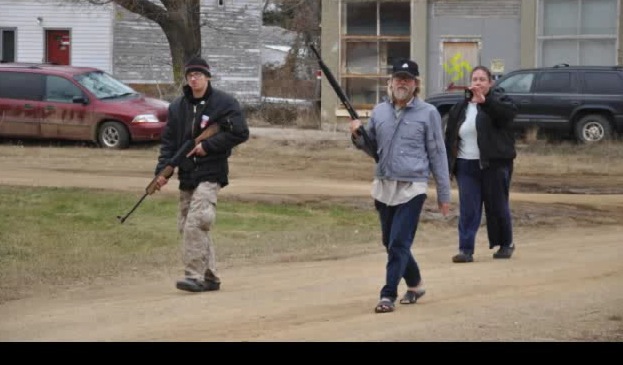 Should she be able to block him from recording what's going on around his home? Vote below, but elaborate on you answer in the comments.

The real question is whether or not the white supremicists have a hot tub within view of the councilmans cameras.

I suspect the precedent regarding pointing cameras at your neighbors left the barn a long time ago. Probably thousands, if not millions of homeowners, businesses and indeed government agencies have cameras busily recording what is happening on their neighbors' property. I don't think it is uncommon for the Police to request video from the adjacent property owners in the course of investigating crimes and accidents, nor is uncommon for the Courts to admit the recordings as evidence. Under those circumstances it seems a bit unlikely that the Restraining Order will remain in force, if it is seriously challanged.

None of this is based upon any formal legal training on my part, just observations of how accepted the intrusion of recorded video in our lives has become.

as of yesterday he still got to keep the camera... he was issued a "stern" warning from the judge regarding the camera facing the towards the front of mr. cobbs house (the supremacist)... they have condemed the property of mr. cobb and it will be torn down in the very near future so that camera won't have much to look at anymore... the other interesting twist in mr. cobbs life is that he took a dna test on a talk show and it revealed that is isn't 100% european as he had expected but had 14% african in his heritage... this is happening in my state so it is on the talk news stations pretty much everyday...

Leith, North Dakota, the least attractive place to live in the US

If the camera appears to be limited to the immediate area surrounding the owner's property, and there is signage (as I have) to say "this property is subject to CCTV surveillance" - I don't see an issue. If, on the other hand, you have a Camera trained directly on my property - I would object. I would also probably do some covert testing on the short term effect that a 5 watt laser has on the average imager. I've often wondered if it would cause damage to an imager" Does anyone know?

I would also probably do some covert testing on the short term effect that a 5 watt laser has on the average imager.

Define short-term, atto/femto-seconds? Much longer than that and you probably have an overt fire...;)

It looks like the restraining order got thrown out, according to the latest news post on this page.

That's a different restraining order that they tried to get against that website. The hearing for the one against the councilman isn't until December 30th .

Oh, pardon me for not actually reading it.

44% of people who voted in the poll said she should be able to block the camera from pointing at her house. Why is that?

I don't want my neighbors camera pointing at my house...

What if it's pointed at a public street and several houses, including yours, are in the field of view?

Carlton, a quick answer is that i would feel the same way.

So a camera is so bad that a judge gets involved, but having an armed group walking around with (probably loaded) guns is OK?

I truly do not understand the logics in the U.S.

Welcome to the crowd! And I live in the USA.

I'm hoping Carlton, will give us all more background on why these guys need to be patroling.

i think the irony of it is that they (cobb and his group) cared so much about a low grade surveillance camera yet they walk around recording video and audio during all of their antics and it doesn't seem to bother them... i am sure they have filmed the city councilmans house from time to time...

So a camera is so bad that a judge gets involved, but having an armed group walking around with (probably loaded) guns is OK?

a lot of places in the US it is not against the law to carry a loaded firearm... there are "gun free zones" where it is against the law... whether or not the firearm is concealed is usually the issue and there are strict laws pertaining to that... the way they (Cobb and his minions) went about it became terrorizing and they were arrested and charged for it...