Casino Table: How Much Resolution Do I Need?

Hi, If a camera is mounted right above the casino table at 5 meters height.

If I want to view cards, chips what is the PPF that should be considered. Typically for license which is roughly 6 by 12 inch is 40 ppf.

I saw a tutorial which showed 80ppf having good recognition. In this case i assume 1.3 Mpx could be min choice...

True in general... but the jump from 720p (1280x720) to 1080p (1920x1080) isn't really THAT great when it comes to pixel size, and there's more to low-light than marginal differences in pixel size. Comparing 720p with something like 5MP, sure... but as we've seen in inumerable IPVM tests, there are WIDE differences in low light performance among cameras with otherwise identical resolutions and sensor sizes.

Most mainstream 720p/1.3M/2M/1080p/3M cameras have ~1/2.8" sized sensors (1/2.7" to 1/3"). Therefore, the size of pixels (which is directly proportional to light sensitivity and hence image quality and low light performance noise wise). This is the primary reason why 1080p/3M cameras typically perform worse in low light conditions compared to 720p/1.3M cameras.

When cropping a 1080p camera to a 720p stream - you are effectively "reducing the size of your sensor", hence further degrading overall light sensitivity. Cropping is hence an option that should only be exercised when bandwidth/storage issues are harder to solve then swapping out the camera for the appropriate 720p/1.3MP model.

Sentence of the Week candidate: "I could be wrong, but then again I know for a fact that I am not."

That image for the poker table was just a test to get the gamma, gain settings correct for the glare before we do the final FOV adjustments.

Yes i got permission to use stills from the owner of the casino. He allowed us to use for whatever reason. I blanked the name out on my own even though it was ok to use his casino's name.

One question for Vincent: why do you have the camera zoomed in so tight on the blackjack table? You have more than enough pixels on target to zoom out a bit and be able to see the dealer and the chip rack.

Barring the above, I'd still like to know what kind of cameras and VMS were used in this install... Hopefully Vincent still wishes to share this.

I did notice that. But the image doesn't belong to the integrator. It belongs to the casino. And I don't think ANY casino would ever approve, at a corporate level, the use of their gaming table images to any online forums. Ever. I could be wrong, but then again I know for a fact that I am not. It doesn't matter that the name is blanked out. I know what alot of casino felts look like, and I can put 2 and 2 together. The main point is that the casino may be under the impression that their system is confidential, as their policy demands, however it clearly is not.

Did you notice tha casino's name was blanked out? That is what we are required to do (plus obtain Gaming Commission approval) before we release images from our casino.

On a side note, I wouldn't even ask if I was considering publishing them (they would refuse), unless they were part of an approved article.

Out of curiosity, what kind of cameras and VMS are being shown in these still images above?

Vincent, your employer/customer allowed you to use stills from their gaming tables? Do they know that you took them home with you? Seems like confidentiality isn't high on the priority list there....

I would recommend consulting a company that has done several casinos with great success. We've walked into a few casinos that have been migrated to IP and are already out of compliance. There's too many things to consider other than just pixels per inch. Lighting and placement are very large key factors too.

thanks for the inputs ,

it agree above thatv1.3 there are some shortcoming usually

Yes you can but all of the 1080p cameras we tested had other shortcomings, including poorer light sensitivity.

This does have a couple benefits: you don't need to spec a bunch of different cameras, for one; you also have the option to increase resolution in the future if it becomes necessary.

It depends on your application. As I've said before, I'm a firm believer in "just enough" camera coverage. For table games, either 1280x960 or 720p, when properly implemented, is more than sufficient to provide high-quality images showing what we need to see. 2MP (1080p) can be overkill, wasting bandwidth and storage; it may not provide optimum images in lower light and it may not provide the 30fps we require.

Try this one... simple, but fairly effective.

Carl, what do you think of 2Mpx..is it a safe bet?

Jvsg has limitations on this with the min. dimension.

So around 12 feet from the table? That's about the same as most of our pits.

We tried a number of cameras from Axis, Bosch, IndigoVision, Ganz and Geutebruck (Basler makes theirs). Ths Axis P33xx series gave the best image quality at very reasonable bitrates (~3-4Mbps). Bosch and IndigoVision cameras had AGC issues, which caused "washing out" of the card faces and excess noise, although IndigoVision provided a fix via a Telnet setting. Ganz and Geutebruck/Basler provided relatively low image quality because of noise and compression artifacts.

All 1080p cameras we tried had issues with our relatively low light levels and the increased pixel count didn't contribute anything to our ability to identify card suits or chips. They also had even more problems providing 30fps.

The cameras are mounted about 15ft high and has a 3-9mm Varifocal lens.

The first image is just what the system was streaming to my phone. We set it at 17fps and the actual frame rate varies between 15-17fps which falls right around what is required.

Your findings jibe with mine. We tested cameras at SVGA (800x600), XGA (1024x768), 1280x960 and 720p and found that SVGA wasn't quite enough resolution (800x600 was really no better than our best analog cameras) and although XGA provided enough resolution to identify card suits, it provided pictures with too many "jaggies". We've settled on 1280x960 for "standard" half-moon tables and 720p for poker tables.

One question: the first image displays 1.0fps. Is that the frame rate you plan to use? That is awfully low. We will be using 30fps, per our regulations. One other thing we did discover is that a number of cameras have trouble reliably providing 30fps, especially feeding multiple streams. The Axis P3354, P3364 and P3384 cameras we tested and a couple of others really bogged down when dual streams were attempted. Typically, they provided 20-22fps or less.

Vincent, Could you please provide me more info on the lens focus on the first and second image ?

A rough estimate shows the table in the first picture is close to 3 meters.

I think a 2MP camera is overkill, here is a snapshot saved from my phone from the latest job. Had to adjust some gamma settings to decrease the glare. I think 720P would be fine. 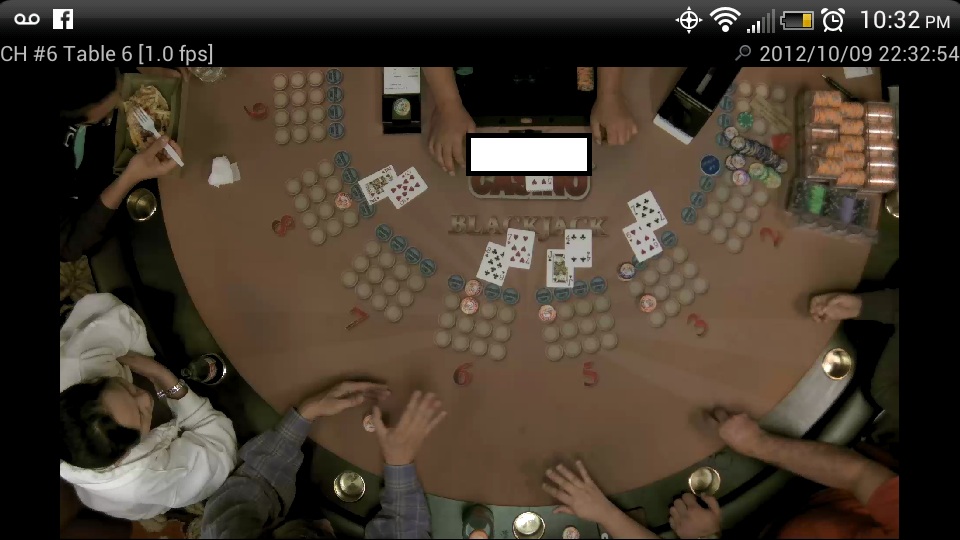 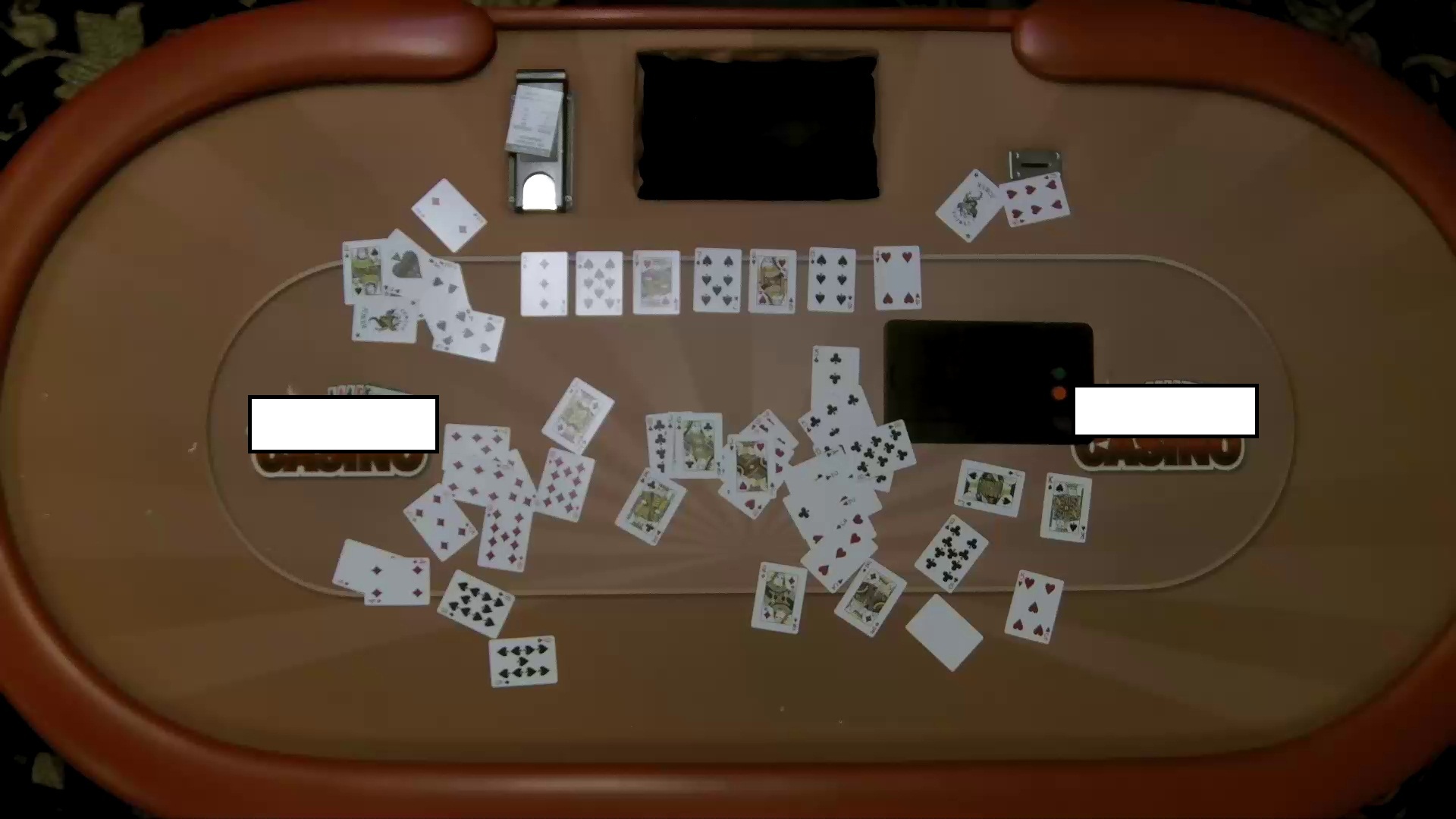