We've had a few discussions and updates on the net benefit or harm of retrofit barricade door locks. You might remember these recent posts:

Lori Greene published an update detailing a school system where over $30,000 worth of a retrofit barricade type lock were purchased by parents, but the local fire marshals have forbidden them from being installed or used.

The objection centers around the barricade lock design being noncompliant with emergency egress codes. If used, these locks potentially trap people inside the room it is being used to protect.

However, schools are looking for inexpensive ways to improve lockdown security for students, and retrofit barricade locks are a cheap(er) way of doing that.

What do you think? Should emergency egress codes be relaxed to allow for these locks?

BTW: I voted 'no'. As a former teenage troublemaker, I can tell you without reservation I would have used these things for all kinds of bad reasons in high school if given the chance.

There are still lots of punk students in schools, maybe more than ever...

Securitech (I'm not an employee) makes their Intruder lock designed for this application while taking life safety into consideration. If they sold a couple more T shirts they could have purchased something made for the job. Not one person involved in this had the brains to consult with somebody to see if this was allowed? Sorry but the chance of this device being used at the wrong time are far greater than it being used at the right time. Good effort though with the shirts. $30K is a lot of shirts!

Not one person involved in this had the brains to consult with somebody to see if this was allowed?

In their defense they were implementing state guidelines regarding active shooter situations, where even makeshift, ad-hoc barricading was advocated. They are now awaiting clarification from the state committee who issued the guidelines/training (excerpt below), before determining how to proceed.

Relying on lockdown alone will significantly endanger occupants in a violent intruder situation. ALICE trainers instruct on practical techniques for how to better barricade a room, what to do with mobile and electronic devices, how and when to communicate with police.

And from a recent state sponsored ALICE training exercise in Ohio:

In the second scenario, participants were instructed to barricade themselves behind a classroom door and find anything they could to throw at the shooter. This time, the staff members grabbed belts and wrapped them around the door handle and shoved tables and chairs up against the door. When the gunman tried to come in during the second scenario, he was not able to get to any of the participants

which I think is certainly true if the educators are not trained on its deployment or the device itself is not kept secure from troublemakers and punks, myself included. ;)

Curious if you are pro-gun or not, since you often hear the same argument about household guns, that they are also far more likely to be used at the wrong time than at the right time.

I don't own a gun but think it is ok to own one. In this scenario though somebody could barricade the door and potentially kill everybody in that room if the building was set on fire since the door doesn't follow code that was written to preserve the lives of people that need to exit an area. Owning a gun doesn't mean you would shoot up a room full of people because that is what an insane person might do. On the flip side if I barricaded a roomful of children in a room in a burning building and they couldn't escape for some reason that might hold me somehow responsible if the authority in this matter didn't intervene and tell me that it could potentially be a dangerous situation. Life safety is a tricky thing. I guess you have to learn from unfortunate mistakes and constantly rewrite what you think is the right thing. Since what has been happening lately in these schools is something in our generation was never even a concern we have to rewrite it all over again and find a lockdown solution that will serve its' purpose in the rare event that it is needed and at the same time work within the definded codes for everyday usage. I remember banging out the gym doors and skipping class knowing I could always get back in most doors without issue since schools were pretty much an open door. That is a thing of the past.

Owning a gun doesn't mean you would shoot up a room full of people because that is what an insane person might do.

Just like having a door jammer at your disposal doesn't mean you are going immolate a room full of kids even when it's clear their is no active shooter because that is what an insane person might do.

If you were the teacher at a school that was issued such a device, wouldn't you be responsible enough to safeguard the device and deploy it correctly, if and when the time came?

If you were a parent of a student at a school where an incident was in progress, would you rather the teacher have one available at that moment or not?

If your answer is yes to both questions, then isn't it really a matter of making sure educators are properly trained to act as well as you might?

p.s. What are the laws for points egress/means of escape when it comes to classrooms? Most classrooms I remember had at least windows to the outside, though, like you say that may be a thing of the past. Interesting discussion in any event. Thanks!

p.s. What are the laws for points egress/means of escape when it comes to classrooms? Most classrooms I remember had at least windows to the outside, though, like you say that may be a thing of the past.

The number of school buildings in the US that are 'grandfathered' exempt from current codes vastly outnumber new or modern construction. I can think of entire schools I have walked in my area on pre-bids with only a single classroom door, no window or secondary egress path, or sprinkler system.

Just recently, a school in my area was closed (during the second week of classes) due to the discovery of aluminum stranded electrical wiring and asbestos insulation. Yikes!

I can think of entire schools I have walked in my area on pre-bids with only a single classroom door, no window or secondary egress path, or sprinkler system.

So then in those facilities where all classrooms have more than one egress (or at least more than one means of escape), do you think the unintended consequences of these devices would still likely outweigh the intended benefits?

Misread your comment as: aluminum wire with asbestos insulation. Shudder the thought...

According to FEMA, there were 4000 school building fires a year between 2009-2011. IF these locks significantly hamper fire safety, they pose a bigger threat than the shootings they're intended to stop. The fatality rate for schools fires is .4 a year, and 12 a year (if I remember correctly) for school shootings. It doesn't seem like it'd take much of an increase in fire danger to outweigh the benefit of this device. It's hard to speculate if these locks increase fire danger without testing them in a staged fire escape scenario.

Lets see those stats for between 1950-2015 and not 2009-11? That is ridiculous to skew that stat during a period when one event totaly outnumberd the other.

I voted no. The reason why we have so few deaths and injuries is in large part due to building codes. Clearly, the gloves come off during an active shooter event and many (if not all) of these door blocking devices will probably work; but making exceptions to the code is a slippery slope. Most inspectors I have run into don’t want even a hint that folks cannot get out (remember the chain on school panic doors and the eyelets installed on the wall to which the chain is attached). Fire officials encourage training and policy, but they cannot rely on such measures in the long term.

I strongly agree with you, that "making exceptions to the code is a slippery slope".

In general, codes are passed in response to tragic events. Unfortunately, the issue of 'free egress' is one of those. We talk about a number of these in our Access Control Fundamentals class, like the (infamous) NYC Triangle Shirtwaist Fire and 1991 Hamlet Poultry Plant Fire. 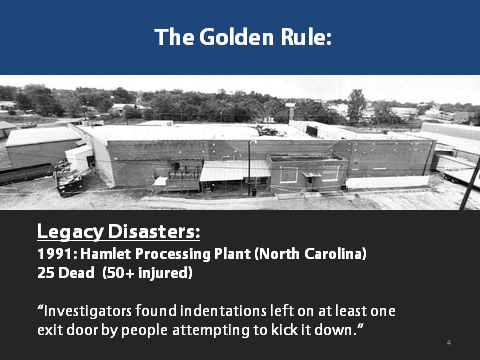 Many people died in those events because they could not escape.

I disagree on this point "many (if not all) of these door blocking devices will probably work (in an active shooting situation)" because a locked door simply will not stop bullets.

No matter if it is wood veneer, hollow metal, or even solid core wood - it will not stop a gunman from entering a locked room. Unfortunately, Sandy Hook is an example of this, where the gunman simply shot his way into the school.