This is an interesting article on video forensics, it's pretty remarkable what can be done to recover an image from what might look like an unusable piece of video..

Thanks for sharing. I assume this is the key excerpt / portion you are alluding to:

"A cold case from Pennsylvania where the available video showed the suspected murderer, but not clearly. What seemed to be the victim, wrapped in a sheet in the passenger seat, was partially visible, but obscured by the driver.

Prosecutors refused to file charges in the case because the images were of poor quality. Investigators applied image averaging techniques to the video, and the image of the driver became very clear. Then, because the driver changed positions several times during the video, investigators were able to digitally remove his image and reveal a full view of the victim."

The big questions are: how bad was the video to start? and how good did they make it? Did you see / find any images referenced?

Image enhancement from everything we have seen has very limited capabilities. You can see a test of one software program in action.

This article is based on an hour long at this link, it shows the actual footage referred in which the murderer is caught on an ATM camera drawing funds with the victim next to him under a blanket on the passenger seat. Kind of a chilling scene.

The main issue he talks about is compression but there's some interesting discussion on other things they can do with video, both analog and IP. One thing is pretty obvious, that video is going to play a much bigger role in the future and like so much in forensic science, we'll see the development of newer technologies that'll bring in a lot of change.

One of the sponsors is and analytics company that does a lot of work for the govt.. Loading a they do a lot of things other analytics do but probably have some other capabilities that might set them apart.

Storage is changing a lot as drive sizes increase and bit error rate becomes a bigger issue, the cost per bit is dropping real fast too and tiering raises the possibility of storing uncompressed files for a time on one type of storage before moving them to lower tier or archive, if this happens with video then forensics will play an even bigger role and overcome the compression issue.

The other limitation on storing uncompressed video is bandwidth but that's increasing and coming down in price too. There are other issues, such as data corruption, outages and just managing enormous data bases but they are also being addressed. A lot of video is stuff people take on their phones and want to share, it's the same type of file with the same quality issues and the technology used here will spill over to other video. Hah! That sounds like an unintentional ad for video forensics.

The video also talks about LEVA, which has a video forensics certification. The program is based at the University of Indiana. It's a law enforcement program but might be open to individuals who are not in law enforcement.

Paul, thanks for sharing that link to the webcast. It's a good one and I recommend others watch it.

Here's one example from the webinar. Note the car is stopped at an ATM machine, giving a number of frames to conduct the analysis:

And here's the background of the scene where the victim is wrapped in a blanket, with the criminal removed: 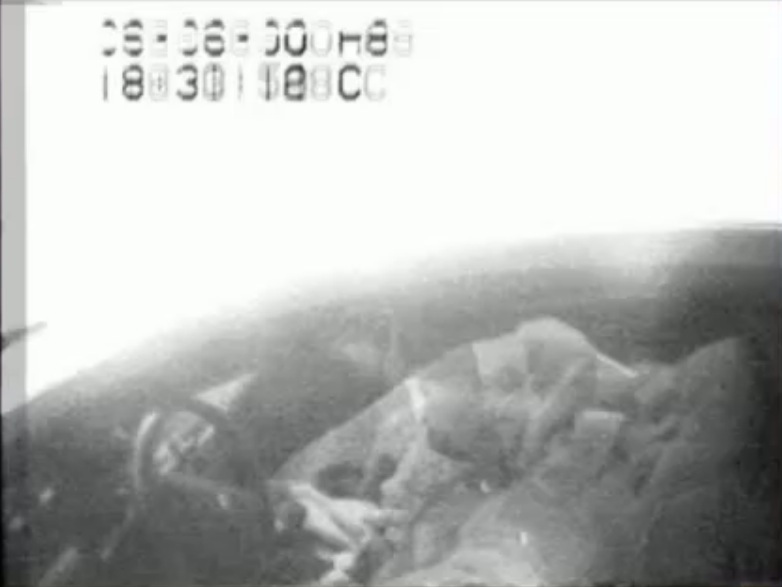 There's a few others in the webcast including analyzing the reflection of a fire started outside of the camera's FoV and calulcating the height of robbers in a bank.

Paul, the one thing I do not see happening is a move to uncompressed files of any kind. The increase in storage in massive (we are talking on the order of 100x more storage). Even the one major surveillance company that trumpeted something close to uncompressed is now moving away from it (e.g., Avigilon Dumps JPEG2000 In New H4 Line). Overall, there are a lot more practical gains from the relatively modest storage increase from higher resolution (i.e., pixel count) than lower compression at the same resolution.

Frame averaging techniques are one of the most useful for the Video Investigator. Static objects at night with compression noise and IR distortion can be cleaned very effectively in order to highlight specific characteristics in an object caight on camera.

Enhanced is 225 I frames extracted from a h264 video and then frame averaged.

David, thanks for sharing an example. Two things:

The weight of any given clarification depends on the purpose. I have used the technique many times on static vehicles, and also on objects before and after an incident. I have also used it when I have only had a few frames to play with. A suspect was hiding from police in an alley and dumped a bag. Before he ran in... No area of light. After he ran out.....area of light!

As you have said many times, if the cameras and recording were better to start off with then a lot of this wouldn't be necesary but I have had some great results recently with a set of frames from a 2mp system where a van parked up right at the end of the FOV and was static for some time. The technique helped to clarify the shape of van.