I am looking at the Razberi Arcus (Milestone) POE switch/NVR all-in-one. Some of Razberi's other items have been reviewed here, but I was wondering if anyone had experience specifically with the Razberi Arcus line.

My understanding is that it's the Razberi standard model with Arcus software instead of XProtect software. What I don't get is why you would put Arcus software on hardware that expensive / high end. By contrast, a better budget solution (which is what I think of when I look at Arcus) is the LenovoEMC Arcus offering.

08/03/13 04:42am
Basically we are looking at it for small installs with 8 to 16 ip cameras. Under 2 grand my cost for an 8 port switch that is also a server is pretty good as far as price point. But yes that is what it is, a switch/server with Arcus pre-installed.
Reply

Here's the pricing listed on their pilot page. It's down considerably from the "Professional" series: 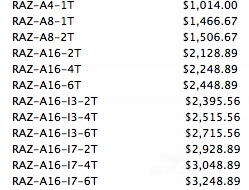 That's price competitive with Exacq, though obviously with less features. Contrast to QSee / Dahua units which have a similar server switch setup at much lower price points. We are testing them currently and they integrate with numerous ONVIF cameras we have connected.

Although it may be convenient to have a switch integrated in your NVR, I don't think it is such a great idea to have many points of failure in single device. If a switch port goes bad, which is not so uncommon, your whole unit needs to be sent in for repair.

Not Razberi, but, I have playing with the Lenovo PX-2 with Arcus. I used a Computar Ganz NMD-2003 camera (onvif compliant to Arcus), an Axis M 1014 and an Axis 5014 PTZ (native compliant to Arcus). Everything was hooked up through an Adtran 24 port POE switch. I wanted to see how "plug and play" it was. I opened the Milestone software via webbrowser through my laptop connected to the switch and the three cameras popped up before the page fully loaded! The Axis cameras were labeled Axis and the Ganz camera had the IP address labeled. Pretty easy for initial set up. I then accessed the cameras to set a few features (fps, H264, days recording, etc) and saw that the motion detection even has some basic masking set up in it. I set up some recording and reviewed the play back. Again I was impressed with the easy setup and not having to refer to a manual. I was able to use the PTZ on the 5014 via my mouse and it responded well. I also accessed the software from my browser on my Ipad over my WLAN and had good picture quality and good response. It does not have all the features of the other Milestone VMS but for a quick easy set up I thought it was pretty good.