A US drone operator shares her experience killing people by remote control.

One of the most interesting points is about the role of the (poor) camera / video feed that is so critical in making decisions. As she explains:

"The video provided by a drone is a far cry from clear enough to detect someone carrying a weapon, even on a crystal-clear day with limited clouds and perfect light. This makes it incredibly difficult for the best analysts to identify if someone has weapons for sure. One example comes to mind: 'The feed is so pixelated, what if it's a shovel, and not a weapon?' I felt this confusion constantly, as did my fellow UAV analysts. We always wonder if we killed the right people, if we endangered the wrong people, if we destroyed an innocent civilian's life all because of a bad image or angle."

I know this is beyond the the scope of IPVM, but I certainly hope the US government uses more advanced/reliable intel. to aquire potential strike targets. Just having a gun (or shovel) in your hands should not be enough to warrant a drone strike. If the determination is really just on the basis of grainy video footage, then I pity those in the line of fire. Additionally, what does this mean when police departments & other civil authorities eventually start using drones? Will they need more indisputable proof or will grainy video be enough for their own citizens?

In theory, I'm not necessarily against the use of drones in war, but I am surprised that our military video technology is not up to par for use at those distances, especially given people's lives depend on it. Unfortunately, the technology aspect of this matter is far beyond my expertise to make any meaningful contribution.

I suspect the poor video quality is a function of three issues:

Can anyone with military drone experience comment on this?

When did the U.S go to war with Pakistan and Yemen? I missed that.

Would the addition of a high resolution still photography camera be of any value? Wouldn't such a device be able to take one shot that has more detail & less bandwith than a video stream? If this is true, the video could be used to do an overall area scan and then the operator could snap a high-res still photo of the target for final analysis.

Although I'm sure the military is way ahead of my simplified ideas and have thought far beyond my little brain's capacity. ;o)

"Would the addition of a high resolution still photography camera be of any value? "

From my understanding, the problem with that is delay time. Your image could be 15 seconds or more "late" by that time a LOT has changed on the ground, relatively speaking. That's also assuming that single image is good enough to see everything you need to see. The odds of snapping 1 pic and having it be of high quality are fairly low.

This is what footage from a UAV looks like:

On Jerome's question of high resolution photography, that is already happening. That is just one part of an intel package although not always available. Still photos are used to supplement the "live" operation. For example, verifying that building 'X,' to the left of the red tower is the same building and UAV pilot is looking at.

The image quality is good enough to get situational awareness, but probably not good enough to be able to tell an RPG from a shovel in all cases. But in those cases, that's where good judgement (to cancel a mission rather than take a chance) comes in. Operators go through a 6-month image analysis course before they actually start in the field.

This is footage from an aborted mission:

You can tell this is a man with a goat, but can you tell what he's carrying? 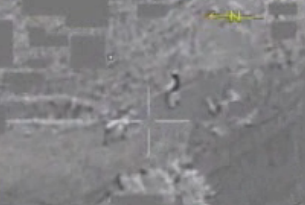 A much more in-depth story of a real-life U.S. drone operator - the story of Airman 1st Class Brandon Bryant - can be found at GQ from a few months ago:

Confessions of a Drone Warrior

i.e. rather than flying Predators around smoking jihadists and the occasional Afghani gardener, generally the intel boyz figure out someone high on the killin list is at such and such a mud hut and the drone operator just paints said hut w/lasers and - after much repeated procedural jargon - releases the Hellfire.

Its true that that is the case on his first 'fire', but wouldn't you say that on other missions he had discretion at least to call off kills based on what he did or didn't see on the screen?

Or in this following example he seems to be given quite an open-ended assignment where video quality was critical to correct assessment:

Bryant’s orders, delivered during a pre-shift mission briefing, were straightforward: a force-protection mission, acting as a “guardian angel” over a convoy of Humvees. He would search out IEDs, insurgent activity, and other threats. It was night in the U.S. and already daylight in Iraq when the convoy rolled out.

Also I have a question about this following section:

The drone crew’s attempts at radio contact were as useless as shouting at the monitor. Brandon and his pilot patched in their flight supervisor to brainstorm a new way to reach them. They typed frantically back and forth in a group chat, a string of messages that soon included a cast of superiors in the U.S. and Iraq. Minutes passed, and the convoy rolled slowly toward the glowing circle. Bryant stared at the screen, heart pounding, scarcely breathing. The lead Humvee rolled across the eye. “Nothing happens,” says Bryant. “And we’re kind of like, maybe it was a mistake. Everyone’s like Whew, good on you for spotting it, but we’re glad that it wasn’t what you thought it was.” He remembers exhaling, feeling the nervous tension flow out of him.

“And the second vehicle comes along and boom.…”

Why didn't they have the drone detonate the mine?! They were minutes in front of it. It's just like a target without a warm body! If it was a guy with a bazooka, its all over!

Mines are the Poor Man's Drones!

The fact that they didn't drop a Hellfire on the 'glowing circle' before the ground troops got to it reinforces that drone operators don't get to decide what to fire at.

I do agree with you that they don't get to decide what to fire at, but won't you agree that those who do decide rely upon assessments by those looking at monitors in which the quality of the feed can ultimately drive those decisions?

The fact that they didn't drop a Hellfire...

The drone operator does not mention this as an option anyone considered. Moreover superiors who could have ordered such a strike did not.

They typed frantically back and forth in a group chat, a string of messages that soon included a cast of superiors in the U.S. and Iraq.

Completely agree... and that was what I was yelling at my screen when I read the article for the first time as well... :)

If this had been a movie starring Sylvester Stallone or Vin Diesel as the drone operator, they would've grabbed the stick and blown the shit out of that glowing circle while 5 other brawny types screamed and tried to pull them out of the cockpit seat to stop them.

And one of the troops they saved would turn out to be some 'tough as nails' hottie who they eventually sleep with later in the movie...