If you ever wanted a glimpse at the sharpest contrast between Access Control and Video Surveillance equipment, behold: 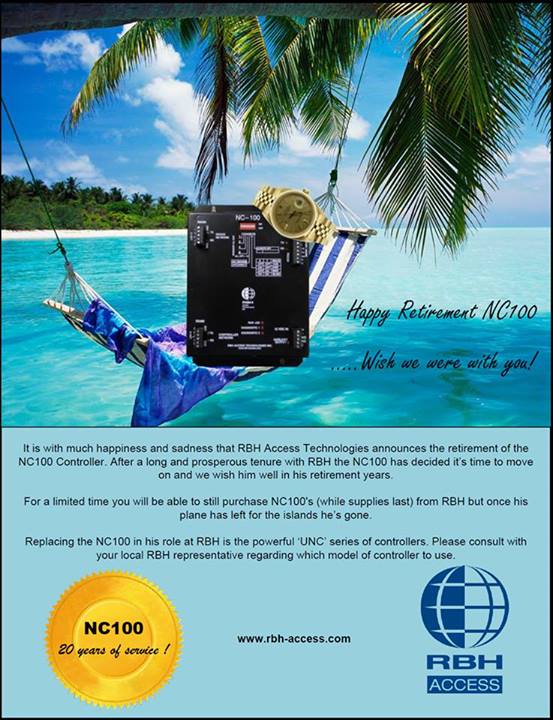 After 20+ years of being sold as a mainstay controller, RBH has finally decided to obsolete it's NC100 controller it released in the early 1990's. And this is not uncommon, either. There is no big rush to push new access hardware into the field, typically because there is just no need.

Unlike video surveillance, where advances like HD and continual refinement of imaging tech translates into new camera models released every year, access control has retirement parties.

We plan to cover topics like 'Access System Longevity" in our upcoming "Access Control Integrator Survey 2014" reports, just to see how long these systems typically last. It will be insightful!

I think it is possible to buy some mechanical exit devices using the same part number 'Von Duprin 88' for over 100 years.

Brian, this is kind of like saying that "Surveillance in 1990 is startingly similar to surveillance in 2014.....'cause, like, ya know, it's' still kind of capturing video to view live or record for later".

In 1990 you generally had to run RS485 or (*gasp*) current loop out to controllers. Now it's nearly all IP, and all the benefits that come with it: TLS, SNMP, etc. You also have new reader technologies, and new ways to use access control data (Time and attendance, energy efficiency, and so on).

Access control equipment tends to be a bigger deal to install and a lot more disruptive if it fails, so don't complain that you can't unlock your door in High Definition. What more important is that it always unlocks for you reliably for years, doesn't take more bandwith to do it at night, when the wind is blowing, etc.