Pivot3's Video Surveillance GM Defects To Pelco, What Do You Think?

Not sure it says much about the state of Pivot3 - Brandon Reich goes to Pelco: 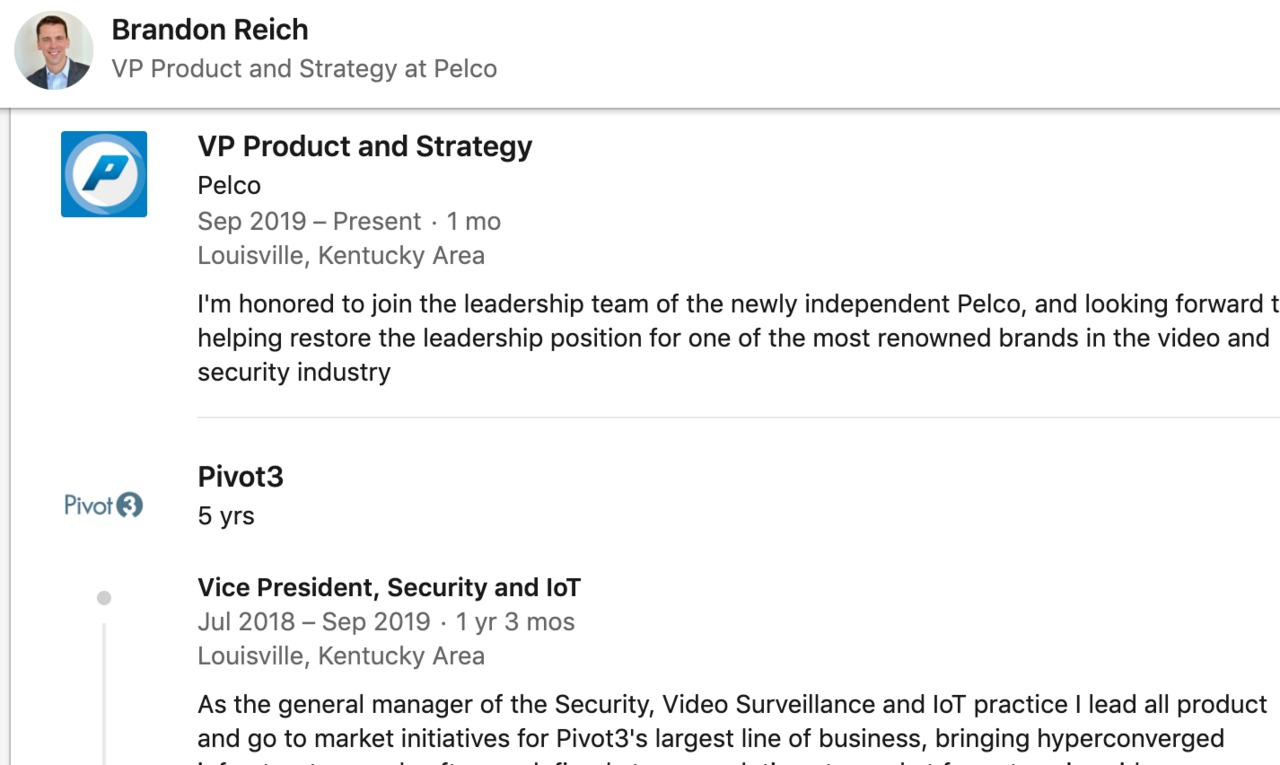 Thoughts on Pivot3 and Pelco?

I interacted with Brandon a bit in his role at Pivot3, as an outside partner, I think this is a net win for Pivot3.

For multiple reasons, I don't hold out much hope for Pelco.

I think this is a net win for Pivot3

So good times ahead for Pivot3?

i'm not sure its "defection", seems like a regular career move, even a small upward mobility (joining a bigger company in a leadership role).

I dont think pivot3 and pelco are in the same category, despite its problems Pelco still has a bigger foot print. Many would make the move.

I don't know Brandon and I don't work with Pivot 3. However, I don't think that moving to Pelco is a 'regular career move' at this point. It would be like going to Hikvision in a way. Obviously Hikvision and Pelco are very different - but they are both plagued with problems.

Maybe he's getting a ton of cash and some kind of long term guarantee. But it seems strange to me.

Pelco is starting over, new management and new owners, so there is a chance to do something new and potentially great.
Hikvision is a giant at the end of its run, having grown too big too fast.

i can understand why pelco can look attractive.

Hikvision is a giant at the end of its run

What do you mean by 'run'? It's going to go out of business eventually? Its fast growth is over? I am not sure what will happen to Hikvision but they have a huge advantage in being government-owned in the world's largest video surveillance market, so I can see them having a variety of positive future paths.

Pelco is starting over, new management and new owners, so there is a chance to do something new and potentially great.

I agree with the Pelco starting over part. Pivot3 is what it is, at best, having never become a major player in the industry. I am a bit more skeptical and Pelco even 'potentially' becoming 'great'. They definitely have a good shot at being better than Schneider Pelco but that a low base for comparison.

The way I see it, hikvision can no longer support sacrificing profit margin for higher revenue and expansion. They won the race to the bottom, and now, after damaging all their competitors they will start to maintain prices and maybe even raise them.

from my (limited) interaction with them, they understand that they are now a huge machine and the time has come for rational business decision making.

they understand that they are now a huge machine and the time has come for rational business decision making.

I can believe that. I don't know, of course, but that would be a sensible position to take in all this.

More broadly, now that their hypergrowth era is over, I am very interested in how they adapt their decision making to a more conventional approach.

so there is a chance to do something new and potentially great.

Is there really though?

What would be "potentially great" at this point in the industry? We've already seen a price floor set by Dahua and Hikvision, among others, so we can take doing something that is both good and cheap off the table immediately, IMO.

We also have 20 and 30MP cameras from multiple vendors, and while they are nice, they are also clearly niche products, not the kind of thing that establishes a company. I do not see much room for disruption in terms of high resolution options.

We have a number of robust VMS options in several price and performance categories. A $20/channel VMS would probably not be profitable, and I doubt Pelco could do much to scale the performance factor, allowing users to use much cheaper hardware for the same system size.

Low-light capabilities of modern cameras are very good. There is certainly room for innovation here, but it would be more incremental than revolutionary at this point, unless Pelco has an inside track on some super cutting-edge thing here. They could buy somebody like SiOnyx, or just license their technology, but would that be enough to drive high demand for their products? Doubtful, IMO, but it would give them an edge in certain niche applications.

They could attempt to do something "great" in terms of storage/compression, but I doubt they would do much better than what you get from an H.265 smart CODEC right now, and I do not think proprietary encoding would be very popular in general.

There is certainly room for improvement on the support side of things, Pelco's old legacy, but good support is expensive. Sure, Pelco has new investors, but do they want to dump a bunch of money into being super helpful? Not sure.

Doing something with tightly integrated video analytics would put them at least in the upper ranks, but that would probably be more to keep them on-par with competitors vs. doing something "new" or "great". Plus, it would be a somewhat expensive engineering undertaking, I do not know what skills Pelco currently has on the bench for this. This might be feasible, or impractical, depending on who is left.

I think that Pelco faces a general problem that is representative of the security industry overall right now. There is minimal room for innovation at this point, and where there is room, it is usually in the form of costly development work, not simple things like cost reductions. The effect of this is "the rich get richer, and the poor get poorer". IMO, Pelco is "poor", and straddled with too much legacy debt in terms of burned branding, lack of ability to innovate, and hodge-podge technology, among other things.

If we see anything new or great from Pelco, I would expect it to be along the lines of trying to leverage their brand into a Prosumer offering on Amazon and online, or something similar that does not involve a lot of R&D or substantial spending.

where there is room, it is usually in the form of costly development work, not simple things like cost reductions

Seconded. The question then becomes how much Pelco and its owner Transom is willing to put in.

There are some areas for improvement in this industry. Something much like the iPhone instead of a Nokia flip.

I think the UX is still really weak, Cloud is expanding but a bit fractured, remote video monitoring fractured by players having to self develop.

However, I wouldn’t expect Pelco to be the solution to any of these.

Just been reminded why I dont touch resi jobs anymore... so I got a resi customer did a 28 cameras Dahua CVI 3 years ago haven't been there 2 years. They had an incident and called me to assist them to copy evidence etc. So the cleaning lady (nosey ass) was watching and was so unimpressed she decided to show off her Ring cams to the homeowners 2 rings outside 2 rings inside her home w 2 way audio and how easy it was for her to navigate the playback and of course the Ring community app and yady yady ya!!I had to admit to my dismay she did a great job!Bottom line here is that the cctv manufactures better catch up or compete with the Rings or they're gonna lose the resi market completely!Your thoughts!

There will always be a captain to be the last one on the sinking ship.

Have we ever seen a distressed camera manufacturer come back from a failed position?

I cannot think of one, but I may be wrong. This industry requires fresh technology with new ideas. Pelco had been a shining star in the Analog world a decade ago. Time to turn the page.

There is only negative goodwill for the Pelco name at this stage. I think they would be best to rebrand and retool if they have a chance.

While there is plenty of negativity with Pelco, a lot of senior buyers / end users have fond memories of old Pelco and quite a number still with Pelco systems.

While I generally agree about the difficulties of turning around, Pelco's brand might be their best overall asset.

If Pelco is trying a comeback, then Brandon is the man to do it. Cudos to Pelco for picking him. He is extremely smart, well versed in the security industry and incredibly organized. I have great confidence that he will bring Pelco back from the dead. Oh yeh...there is this whole Schneider Electric thing and the new Merc based Continuum product. They have the guns, and Brandon is the Ammo!!!

I also disagree with the term "defects". In my view, it shows Pelco's willingness to hire the best and the brightest and invest in their own future.

Life moves quickly. In the 9 months since this, Pivot3 had a massive layoff and Reich has already left Pelco to start his own consulting company, SecureBI.

I'm sure all the COVID issues didn't help a company that was surely already revenue constrained.