No Pole Mounted Cameras In Florida Because Of Lightning?

I'm doing a design project in central Florida and was just told by the project electrical engineer that installing IP surveillance cameras on poles in Florida is a bad idea because of the potential for lightning strikes. He wants all the cameras on the buildings instead.

Anyone have any experience with pole mounted cameras in Florida or other lighting-prone areas?

Do you avoid placing cameras on poles or take any special precautions against lightning?

Maybe the chances of a direct strike is reduced with a building mount, but the atmosphere is Florida is still so active that even cloud-to-cloud can generate enough ambient EMI to cause equipment to fail.

I live in Oklahoma (still pretty lightning-intense), and every pole camera should include a lightning arrestor, if for no other reason that to prevent cabling from being the conduit for damage to the camera or the backhauling switch. (As detailed in our Lightning Protection for Surveillance post.) Around here, grounding the camera and including the correct arrestor on a copper connected camera can increase the lifespan from several months to years.

Hopefully one of the Florida guys can give you a 'local' answer.

Michael - I spent 10 years as an integrator in the Centraal Florida area along the I-4 corridor and have put many cameras on poles at utility plants and airports. Some keys points:

Here's a picture of a recent installation for a perimeter gate (the PTZ had not been installed yet) there is a fixed camera about 2/3 of the way up the pole: 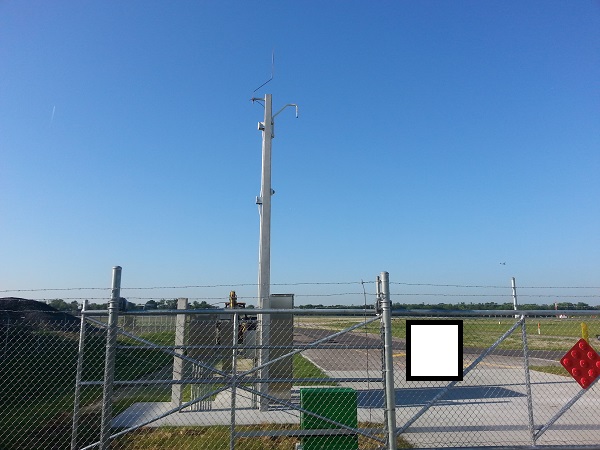 All of the network equipment and surge suppressors, as well as access control equipment for the gate is located in the NEMA 4X cabinet near the base of the pole.

I hope this helps, feel free to contact me if you need more information.

Thanks John, this is very helpful. The poles we will be using will have light fixtures on top so our cameras will be several feet below the top.

I have never seen the style of lightning rod shown in your photo. The offset arrangement is interesting, presumably this is to divert the lightning away from the pole itself? Also, it appears as if you are running conduit for your camera cabling outside of the pole rather than inside of the pole. Was there any particular reason for this?

The camera cabling is generally concealed within the pole if there is not light fixture at the top. The reason for the conduit is that the electrical contractor who provided the poles did not purchase the ones with an internal cavity. The reaon for the unique attenuator arrangement is that the pole did not provisions for a standard spike attenuator that attaches at the top nor the internal ground cable, so this was the electrcial contractor's solution. The owner is not happy about that and may require the electrical contractor to remove the poles and start over with the correct ones.

We put a bunch up in Tampa using concrete poles and run-of-the-mill lightning and surge suppression. No real problems five years in.

I used Ditek mostly, but Transtector and EDCO are good too.