Hi, I'm not an installer but law enforcement to do with licenced premises in London UK. I been viewing a brand new very expensive IP system with megapixel cameras. I've noticed that frequently, recorded footage in the nightclub shows persons bleached out white as if there are problems with the auto iris. As usual in a nightclub, its a mixture of low light, bright light, strobe and neon etc. The excessive over exposure is in my experience worst than many analogue systems. My question is, is this normal with MP cameras? is there a problem that warrants the contractor returning to look at it? are the settings wrong? The nightclub Manager is in denial as he supervised the work on behalf of owners. But I don't think its satisfactory. What do you think? thanks.

Sounds like IR illuminator (part of the camera or maybe added to help with low light shots?) glare on a subject being to close to the camera -- maybe they need to be adjusted for a wider lower strengh beam

Undisclosed, as Paul mentions, question #1 is: Do the cameras have built in IR illumination? 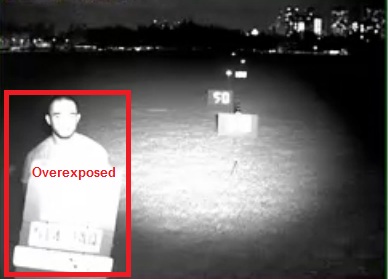 Without actually seeing the setup or at least some sample images, I would pin this on a combination of two issues: one, unless they have different user-configured metering modes, most cameras tend to set exposure based on an averaging of the entire scene, and in a nightclub where most of the area is dark, cameras will tend to expose to that and anything with even a little light on it will be overexposed (this is an issue with all types of cameras); two, some MP cameras I've seen seem to come with a higher-than-normal contrast setting (presumably to create a more defined, sharper-edged picture), which would be detrimental in a situation like this.

I'd say it's likely an issue that at least warrants the contractor going over the cameras' image settings and possibly adjusting brightness, contrast and gamma. It may be necessary to attend while the club is in operation and set a fixed exposure suitable to the desired views, rather than letting auto-exposure try to deal with it. If the cameras support user-defined metering zones, setting those up may help.

Ideally you'd probably want something in a wide-dynamic camera, but I doubt anyone involved will be interested in swapping out cameras at this point.

We've just done an install in a lounge-style restaurant using Axis P3384-V WDR/Lightfinder cameras and I'm finding the WDR works REALLY WELL for us (so far - the place isn't open yet so I haven't had a chance to test at night-time lighting levels).

Yes John that's it regards the person but your picture shows the area behind illuminated which I wouldn't say is the case here. Its almost as if the figures and particularly their clothes, are heavily reflecting glowing white light back at the camera.

At the very least, I'd check to see if the cameras have any way to lower the IR illumination levels. Maybe even try to disable the IR illumination and see which is better. Those are the two things I can think of that does not require adding or switching equipment.

If the site uses a lot of blacklight (UV), anyone wearing white will tend to glow a bright purplish-white - someone wearing a white shirt would certainly show up extra-bright on the camera. 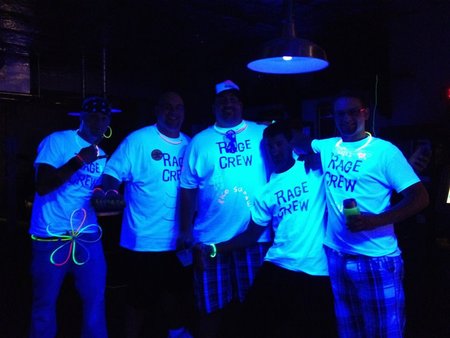 At this point, without more details on the cameras used and/or some sample pictures, everything is just guessing.

A member just asked about cameras in nightclub. I am copying a video we posted a while back in the LinkedIn group testing IR and strobe lights: